Say you're a consortium of real estate developers, and you want to cash in on the "Hollywood Renaissance."  Well, you could erect a shopping mall next to a major landmark -- say, the Chinese Theater -- and build it around a huge courtyard to take advantage of all that foot traffic on the Boulevard.  Then you could give a nod -- or at least a head fake -- toward the town's history by decorating it with massive reproductions of the elephant statues and the Great Gate of Babylon from Griffith's Intolerance (because your Peachtree development in Atlanta has already snatched up that plum Birth of a Nation theme).  Finally, you could fancy it up with mosaics that vaguely recall the Yellow Brick Road from The Wizard of Oz, and add one of those "dancing water" features that ejaculate from the pavement in perfect unison, kind of like a bukkake fetish video starring the USMC Silent Drill Team.

Just to give you an idea, this is what the place looked like at Christmas: 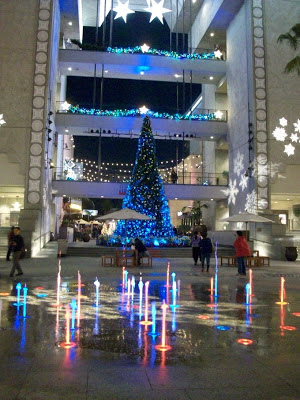 It contains exclusive nightclubs, fine dining, a Broadway-style theater where they hold the Academy Awards, and in daylight you can even see the Hollywood Sign neatly framed by the Babylon Gate like a lunar eclipse viewed through the trilithons of Stonehenge.   It couldn't be more picture perfect, right?  So after all that time and money and attention to detail, what happens?  You turn your back for one minute, and a Russian submarine breaks through the flagstones and breaches in the middle of the courtyard like it's Ice Station Zebra. (Click to embiggen.) 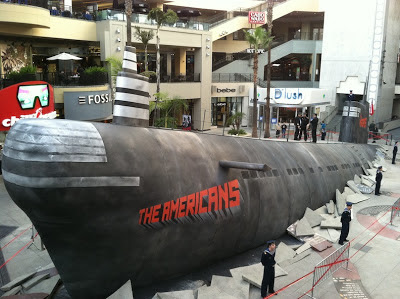 I gather The Americans is an upcoming series on FX about Soviet sleeper agents in the Reagan Era, and I'm sure they're excited about it, but you know what?  Even if I were a tourist thrilled to be in Tinsel Town, I think I'd rather watch a network promo after How I Met Your Mother, or read about it in TV Guide than be bent over, squinting at the mall directory and suddenly take Red October up the ass. 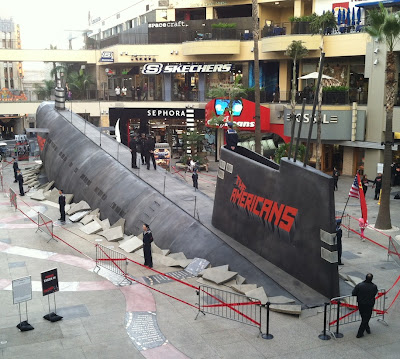 The flag at the rear of the conning tower was two-faced -- American on one side, Soviet on the reverse -- and occasionally one of the crew would use it to communicate in semaphore with Sephora.

The uniforms looked amazingly authentic, the sailors standing guard would periodically march around the sub while the Soviet national anthem blared and the officers on deck shouted orders in Russian; and I must admit, I was kind of impressed they went to all that trouble.  Then I remembered that it's Hollywood, and you can find people shouting in Russian pretty much anywhere, including the elevator when I got home. 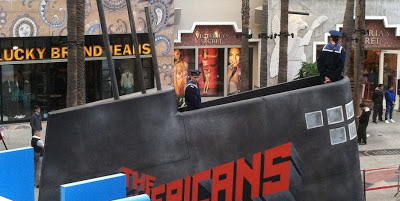 Very well, Tovarishes...We will expropriate bluejeans and decadent American brassieres, then sell them on streets of Moscow and live like kommisars!

So anyway, we can call off the Hunt for Red October.  Turns out it was next to Lane Bryant the whole time.
Posted by Scott at 11:31 PM

Failed script idea for Speed 3: The Cunts from Red Mocktober?

I hate Hollywood & Highland. All those fake Abyssinian ziggurats! although it can sometimes be fun to take tourists there.

I'm sad you've omitted the various costumed characters that hang out there. How did Sponge Bob, Darth, and Spiderman react to the submarine?

What REALLY happened to the Submarine Kursk.

Watched 30 minutes of the episode. Couldn't figure it out Won't be back.

Made me laugh. I blame you because this made the migraine worse.

Me: The fucking fuckety fuck am I listening to ocarina music?

Partner: Is this aphasia? Are you having a stroke? I don't even think those are real words.

I so want that sub for my yard on Halloween.

Hey, D.W. himself would have done something similar if he could...

Great description, Scott. I have one East Coast Elite-type ignorant question: what is the looming black object or facade or presence in the background of the top photo? It looks like where the virgins are taken to be presented to the furnaces of Baal.

But I often find Big Glitz sinister. It tends toward what Fritz Leiber called "an unhealthy gigantism".

Li'l, the black is the night sky seen through the "Great Gate of Babylon" (the greatness of which is marred, in my opinion, by the three catwalks that cross it). It's a bit hard to tell because the photo was snapped at an odd angle, and you can't quite see the top of the arch.

Very fine indeed! Thanks for the heads-up.

I'm this late to the party, an no one has said this?!

"EGERMENCY! EVERY ONE TO GET FROM STREET!"