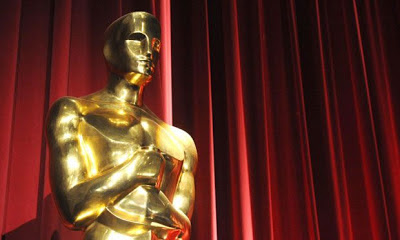 "C'mon, c'mon, play this guy off already!  Mr. Clean and me wanna hit the Vegas Seafood Buffet before all the shrimp toast is gone!"

My friend PJ of One Minute Movie Reviews hosts an annual Academy Awards potluck in which all the dishes have a tasty if tenuous connection to the nominated films.  Last year was a dessert buffet, and featured such items as:


The Help – Chocolate Cream Pie is the obvious choice.  No one will eat this so you don’t have to worry if it’s good or not.


Hugo – Croissants and milk would be really cute especially if you can get a little urchin obsessed with clocks and robots to steal them.

Occasionally I'll get a call a week or so before the event asking for help with the theme, but not this year, because for 2013, the Oscars menu writes itself.  Here's a taste:


In AMOUR they have a frisee salad, croissants and coffee with milk but I don’t want my party guests thinking about staring into the abyss of death more than they usually do, so maybe skip it.

Check it out here, and see who got the Oscar Nom nom nom.
Posted by Scott at 4:11 PM

Email ThisBlogThis!Share to TwitterShare to FacebookShare to Pinterest
Labels: For No Good Reason, Now a word from our sponsor