Now Is The Autumn Of Our Discontent

Sorry for the lack of posts, but I'm coming down to the wire on this deadline (Monday morning -- I can already hear the Boomtown Rats in my head).  I'd wanted to honor the holiday with a review of the 1981 slasher flick, My Bloody Valentine, but that'll have to wait till next week.  In the meantime, here's our take, from Better Living Through Bad Movies, on the Most Romantic Movie Ever Made about intergenerational pre-necrophilia. 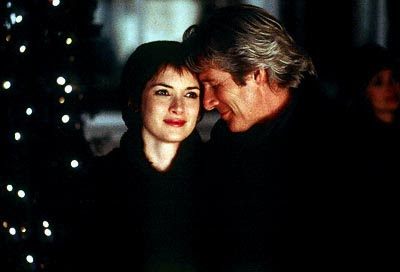 Suggested tagline: “It’s ‘Lolita’ meets ‘Camille’ in the feel-bad hit of the summer!”

Our movie begins with the gray-haired Richard Gere ﬂirting with pregnant women in Central Park. Clearly Richard is a womanizer who must be taught a
lesson—so God decides to make him fall in love with Winona Ryder. Yeah, it seems kind of harsh to us too, but remember what He did to the Cities of the Plain for roughly the same offense.

Richard is a successful restaurateur who has just been named “Sexiest Man Alive” by The Journal of Industrial Food Service when he is introduced to Winona by her grandmother. Richard used to date Winona’s mother, and Grannie thinks it would make a nice tradition to pass him down through the generations. According to Grandma, Winona is a talented hat maker, and in fact designed the chapeaux that everyone at her table is wearing. Since they look like those pipe cleaner spiders that you made in grade school for Halloween, we begin to suspect that what’s so special about Winona is that she attends Special Ed.

Richard asks Winona to design a hat for his date to wear to the big charity ball. When she delivers it, he tells her his date cancelled and she’ll have to go with him (because there’s nobody else over the age of eight who would be caught dead wearing the Deely-Bopper antenna thing she made as a headpiece). She giggles, stammers, hiccups, and then accepts, telling him that he’s not too old for her because she “collects antiques.” You can smack her if you want to.

Richard pulls out a dress for her to wear—it’s a low-cut, form-ﬁtting sheath
with a shawl made of Slinkies; he obviously knows her tastes. Instead of thinking
this is creepy, she is charmed and scrunches up her face for a kiss. When he
doesn’t oblige, she looks into the distance and remarks, “I can smell the rain.
When did I learn to do that?” Probably while attending the school where she
learned to make hats out of pipe cleaners.

The Rainman bit makes Richard hot, and they spend the night together. The
next morning the commitment-phobic Richard tells her that there is no future to
their relationship, but the wily Winona has the perfect riposte to that line—she
says she’s dying. Yes, it seems that she’s suffering from a fatal movie condition
that has no symptoms except for an occasional fainting spell and a lovely glow.
(Although these are also the symptoms of “movie pregnancy”, we are assured that
Winona is afﬂicted with a chest tumor that will cause her demise within the year—maybe less if we’re good, since she has decided to forego all treatment.)  Now don’t you feel bad for hitting her?

Winona and Richard realize that they are totally wrong for each other, but
decide to have a romance anyway since she’s dying and it’s not like they’ll have to
spend a lot of time together. Which is a good thing, since Winona says adorable
things like, “Your friends like me better than they like you.” Then she steals his
watch, telling him he can have it back when he forgets she has it. She is just so
precious that we don’t want her to suffer another minute—let’s call Dr.
Kevorkian!

Instead, Richard takes her to a costume party. She goes as her heroine, Emily
Dickinson, so she can reuse her costume from Little Women and quote lines like
“Love is a thing with feathers” at us. It’s no wonder that while Winona is reading
stories to the host’s hapless children, Richard is on the roof having sex with the
dead A.D.A. from “Law and Order.”

But being sick has given Winona super powers, and when she puts her hand
on Richard’s heart she knows he slept with Claire Kincaid. Richard ﬁnally admits
it, claiming he did it because “You’re a kid and I’m a creep.” We certainly can’t
argue with that.

Richard returns to his apartment, only to ﬁnd it infested with cards inscribed
with Emily Dickinson quotes (“This is the hour of lead” would be an apt descrip-
tion for this movie, except that it lasts way longer than an hour). Winona goes
home and actually whimpers like a puppy. Grandma tries to cheer her up by tell-
ing her that Richard also broke her mother’s heart. The parallels with the Woody
Allen story are uncanny!

One day Winona enters her bedroom to ﬁnd an unkempt bum in there. It’s
Richard, who has neglected his personal hygiene in an effort to convince Winona
to take him back. “Could you let me love you? Please? Please? Please?” he
entreats. Just as this kind of tireless wheedling ﬁnally persuaded your parents to
let you have the illegal ﬁreworks that blew your hand off, his whining causes
Winona to relent and let him dote on her.

But now it’s winter—and Winona isn’t dead! This is clearly a violation of the
Geneva Convention! The movie tries to mollify us by having Winona go ice-skat-
ing, suddenly remember she has a heart condition, and collapse into an adorable
heap. Richard, who is evidently her legal guardian now, decides that she will have
the experimental surgery that could save her life. Now he only has to ﬁnd a doc-
tor who saw How to Make an American Quilt and still thinks she should live.

Winona is mad when she ﬁnds out Richard tried to save her life behind her
back. But Richard explains, “You don’t want to die! You want to live!” She’d never thought of that before and agrees to the surgery, eloquently informing
Richard that “I don’t want to leave you. Ya know?” It’s dialogue like this that
demonstrates the screenwriter’s literary aspirations. Ya know?

Then there are the tense hours of waiting while the surgeon does his stuff. He
ﬁnally exits the operating room, his head bowed, his shoulders slumped. But he’s
just funning us, for it’s good news—Winona ﬁnally died! Richard goes home,
ﬁnds his watch, and lives happily ever after. The end.

So, what does this movie teach us about winning a man’s heart? Oh, just
oodles and boodles of stuff! (Sorry, all the Winona cuteness still hasn’t worn off.)
Anyway:

I loved the Emily Dickinson quotes....why?

I watched both this film and Sweet November in a sort of half-sick virus haze a few years ago -- they were on cable all the time, and they're basically the same movie except one has more Gilmore Girls in it than the other. And I too noticed that her reaction to Gere's "You want to live!" was "Oh... hey, yeah, maybe I could do that instead."

If it had been made in 2009 it would have involved at least one scene with a Snuggie.

You can smack her if you want to.

Now don’t you feel bad for hitting her?