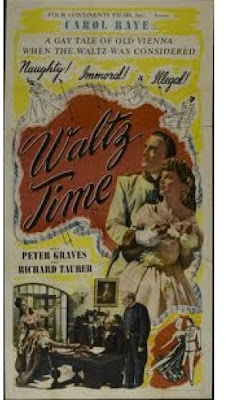 If you've never been to Vienna, you may want to reconsider your itinerary after encountering this bizarre reworking of "Die Fledermaus," under the plodding but workman-like direction of Austrian veteran Paul Ludwig Stein.

Vienna has fallen into the doldrums. The city doesn't have the cutting edge it once had, sort of like the East Village, NYC nowadays. The Emperor (Brefni O'Rorke) has expired, leaving his daughter and only child (Carol Raye) to take over the show. Empress Carol quickly discovers that there's more to Empire than witty repartee, meticulous costuming and elegant entrances. In fact, the poor thing has to bury her beloved father, assume the throne, and get hitched to her louche, homosexual boyfriend (Peter Graves). Sadly no, he's not the same Peter Graves from The Night of the Hunter, or Mission Impossible. He's another actor with the same name, but not the gumption necessary to do the hard work that name implies, such as sharing the screen with Peter Lupus or badly-composited giant grasshoppers.

Empress Carol makes the mistake of honoring her father's wish that she trust the judgment of the Vienna Council of Ministers. The Council is composed of old and decrepit SOBs. Because they can't hear or see very well, they don't have very much to do. They might just as well be the Maytag Board of Directors. Still, she believes these guys are adept at greasing the wheels of central European government, so we'll forgive her this time. The Ministers advise her to have lots of babies. They also advise her to stay away from the "Mondo Blini" saloon, where people hang out and, you know, do the "Waltz." In three-quarter time, even. It's so much fun that everyone is doing it, so there must be something to it. There isn't.

After collaborating with boyfriend Peter in a forgettable duet in the first reel, with heart obviously a-flutter and with babies on the brain, Empress Carol introduces him to the Maytag mavens. After being presented with Councils' rather reasonable conditions regarding his future Official State Stud-Daddy status, boyfriend Peter cancels the engagement, then walks out in a flaming hissy fit! Poor Empress Carol, exposed as a 'fag hag,' sheds a few cubic millimeters of glycerin, then goes looking for ... Trouble! 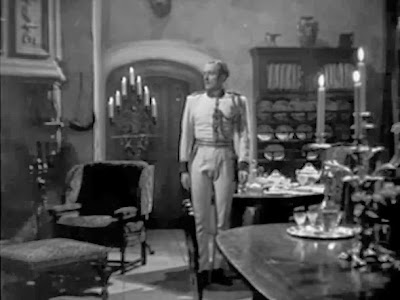 In addition to the Waltz, Imperial Vienna also invented the "Moose Knuckle."

Anyone familiar with The Third Man knows that Vienna isn't the kind of town where one goes looking for trouble; even if everyone's laundry is spotless, starched and ironed to perfection (the Viennese being fond of high-quality household durables). During the second wash cycle we're taken to the Mondo Blini beer garden. Unfortunately there's no beer being served and no waltz dancing, because the proprietor insists that everyone pay attention to hack production numbers featuring gypsies and people in silly horse costumes.

And this is where the plot becomes somewhat twisted. The clientele of the beer garden are "Quality People," of the social register, who frequent the dive incognito for nothing more than shits and giggles. One fateful evening the Maytag mullahs, in a fit of faux-Calvinist morality, raid the joint and everyone is arrested--including Empress Carol. The horror! Adding insult to injury, Maytag tries to shake down the detained patrons for bail, until Empress Carol reveals her true identity. All of the red quarters collected from those arrested are returned to the State Treasuries.

I must mention that Vienna is also a town of bad matte process. Regardless, rest assured that everyone arrives home safe and sound. It's worth hanging out for the first rinse cycle, if only for the dulcet tones of Richard Tauber, renowned alcoholic tenor of the day. Yes, it is rather late in the picture to introduce a new character, but everyone else is hung-over or making babies. Tauber is a breath of something, though, like the beer at Mondo Blini, he's flat most of the time. He wanders aimlessly amongst geese and gander, looking for that beer garden he's heard about, but can't locate because of the bad matte process.

After final rinse comes a highly-accelerated state of spin dry, where Empress Carol and her homo boyfriend Peter finally tie the knot. Guess who's invited to sing -- Richard Tauber! He performs his number in the cathedral choir, hands resting comfortably on the shoulders of two angelic-looking young boys---most likely for stabilization. The Maytag mafia is retired and the Waltz becomes the official court dance of Vienna! Afterwards everyone moves on to more interesting topics, such as atonal music theory, psychoanalysis, relativistic physics, the assassination of the Archduke Ferdinand, the historical closure of the Hapsburg Empire and the concept of global conflict, not to mention the invention of refrigerators and dishwashers. The beer garden, for all I know, may still be there. Long live Vienna!
Posted by Scott at 12:02 AM

I laughed, I cried, I read the review at WoC. (rinse and repeat)
~

In addition to the Waltz, Imperial Vienna also invented the "Moose Knuckle."