World O' Crap Guest columnist Keith has been wanting to join in the Wo'C Brand Cat Lurve for awhile, but his kitty is black, and can therefore do that "Blink and My Face Disappears" thing (which is also one of Riley's favorite tricks), making portraiture a dicey proposition, but he finally caught her in an unwary moment: 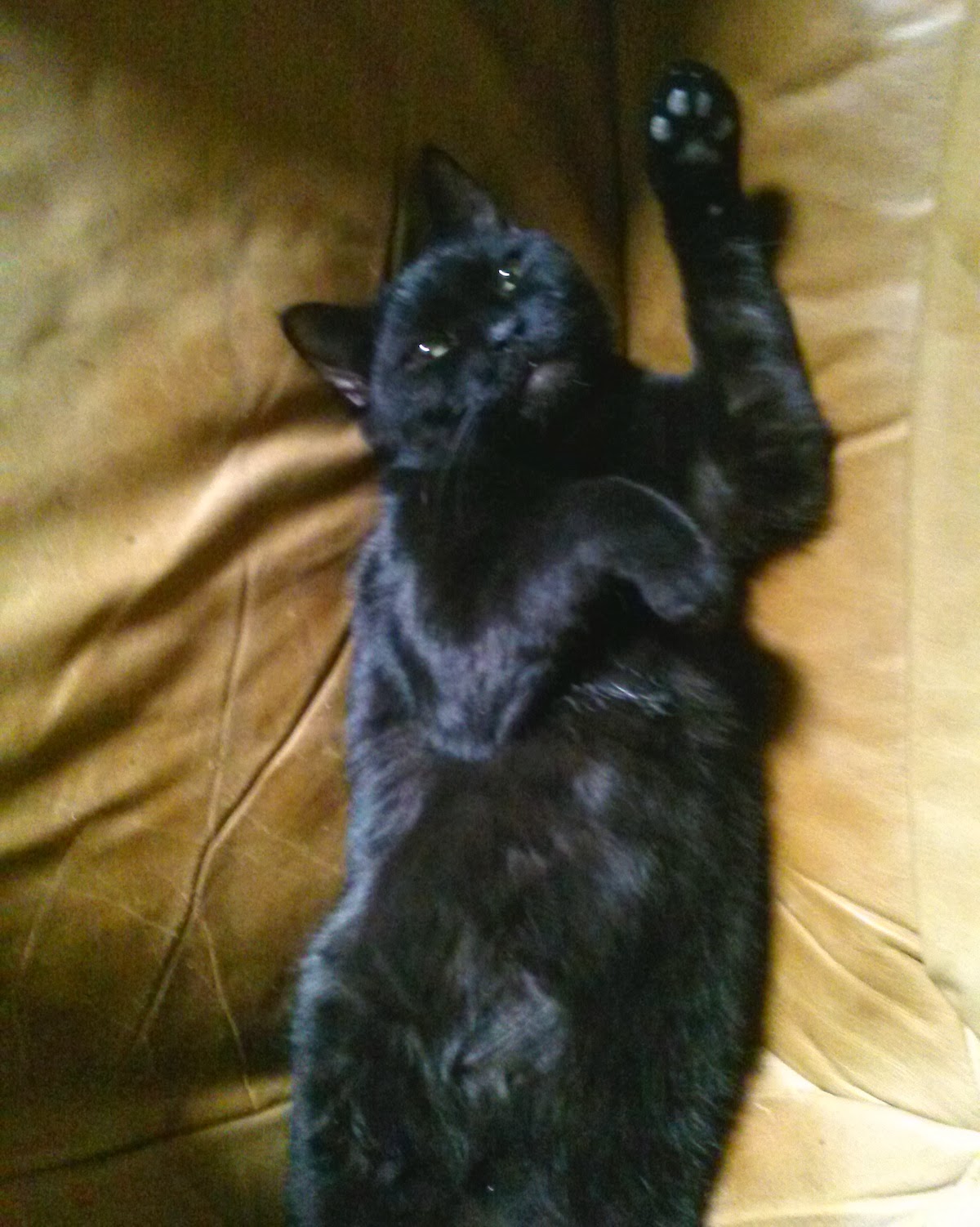 Got her. It's a screen test. She's giving everyone a high-five.

This rescue cat's given name was Sydney. Everyone who met her called her "Midnight" but when I need to find her I still use Sydney ... Let's just call her "Sylvia Sydney" for this terrific casting couch photo.

And hey...since I'm still trying to finish this script and can't yet return to regular blogging, feel free to send photos of your own cat or dog (or other pet) to my email address on the top right.   And don't be intimidated by the raw, Terry Richardson-style sexuality of Midnight's pose -- some of them can be more on the Edward Steichen or Cecil Beaton side, if you prefer.

UPDATE:  From our friend acrannymint: 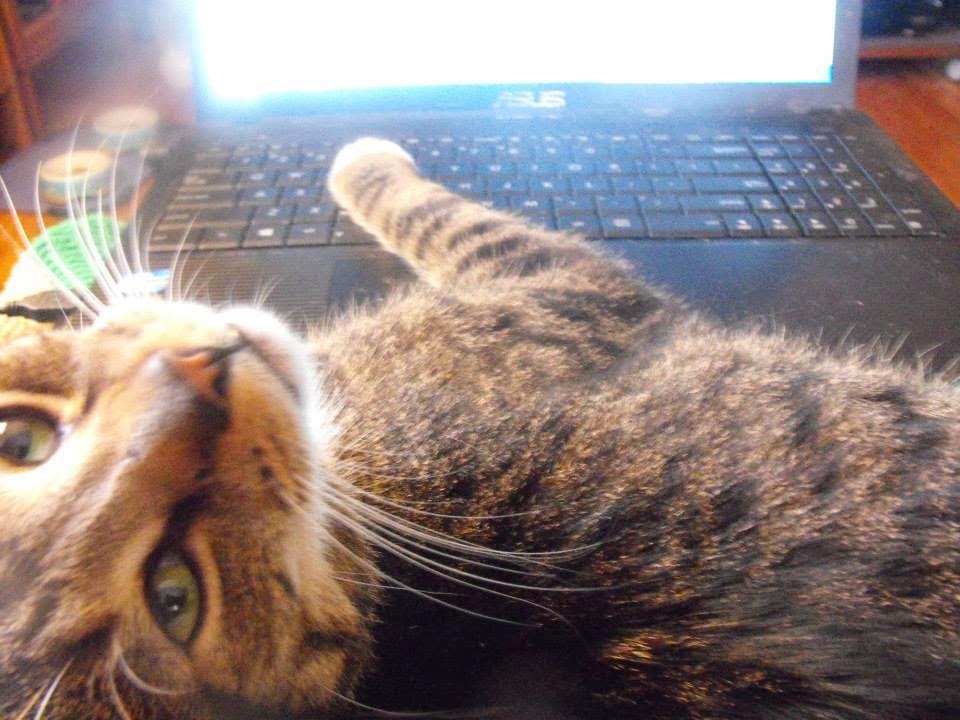 UPDATE #2:  From our film-savvy friend, grouchomarxist: 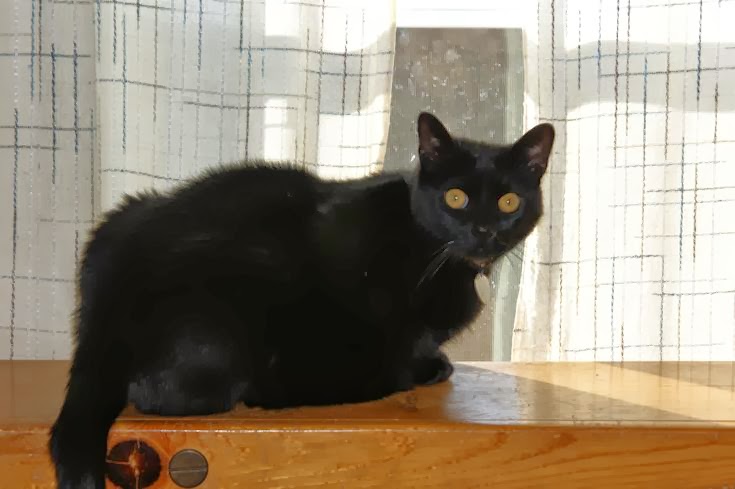 Ninja is the most recent arrival in our household. He's our "parlor panther", bad-boy and mouse-hunter supreme. 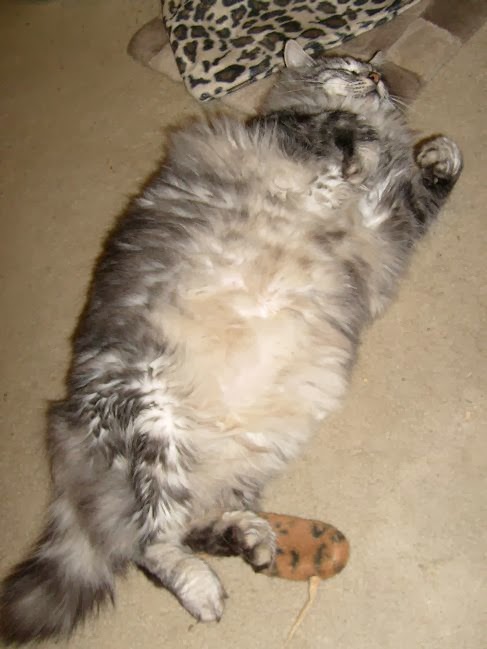 Fred is our Maine Coon Cat, with over eight years' experience in creating gracefully flung poses like this.

The three on the bed, from top to bottom are Puck, the Turkish Van, who sadly left us not long after the picture was taken. (He was 18 at the time.) Then there's Skitter, the tabby, whose personality appears to be a close match for Moondoggie's. She's a blithe and bonny creature possessed of the most varied repertoire of trills, squeaks and meows I've ever encountered. (She's the only cat in the house I can have a real conversation with.) And last but not least Smudge the elderly tortie, who's bullied poor Fred -- who outweighs her by a factor of at least two -- unmercifully since the day he adopted us, six years ago.

And in her turn is often harassed now by impudent newcomers Skitter and Ninja. Karma's a bitch, ain't it?

That is one gorgeous black cat! As a fan myself, I have to say, FABulous fur! I'd wager that she's a shed-aholic, eh darlin'? Any lovely little shiny-black tumbleweeds go rolling past you yet?
Amazing face on that girl, too --- SO thoughtful yet imperious, very Rita Hayworth before a musical number. Gilda, maybe?

And crannymint, that lovely tabby puss seems AWFULLY confident that THIS is Huck's CORRECT placement at all times... you've got your hands full, eh?

My tabby, Zinzi, seems to confirm the theory that tabbies natural habitat is keyboards.Totes frustrating.
Suezboo

SuezBoo, darlin', my first kitteh was a big long-legged tabby named Simon, who had a white collar/belly & four white socks. Back then (age 11) all I had was an ancient standard typewriter, so Simon's favorite habitat was draped around my neck like a breathing STOLE. Always found those fox-fur wraps with the FACES KEPT ATTACHED, with their little jaws locked onto the next fox-hide in the piece --- SICK. Bad enough you're killing the inedible and BARELY using them for "warmth," but to HUMILIATE such a graceful creature like that?!?! Beyond tacky.

Thankfully, Simon didn't think anything of playing "stole," it was just his most-comfy place to crash, if not atop my head if I sat in the rocking chair. That's James Dammit's favorite perch, now that I inherited Teh Dick's recliner, and if he's desiring something or wanting me to not rock the chair or whatever, he smacks me right upside the head with his VERY emphatic tail. He's more than capable of vocalizing his conversations and/or objections, believe you me, he can nag a bitch DEAF --- but that tail upside the face, THAT is UNPLEASANT. Sometimes, on rare occasions when he likes me, he PETS ME with that tail, esp. if he's got a full stomach. And one of these days, I'm going to get some of the many pictures of him edited-down to usable sizes, to contribute to the WO'C Hall O'Critters. He's GAWGEOUS, and he knows it. Spoiled rotten & vain-as-hell to boot!

A panoply of adorable fuzzies.

Well, I'd email you his photo, but let me link to him here

That is one luscious-looking kitteh, Carl. PLEASE tell me that he's not polydactyl because he's kin to those abusively-inbred kittehs that keep multiplying 40+ years after Hemingway blew his big fat head off, huh?

(HEY, **YOU'RE** the one with the gawgeous tropical pictures & friends' bungalows in the islands, it follows that a polydactyl kitteh MIGHT be attached or akin to THOSE island-chain polydactyls...)

At any rate, that is THE most-contented, spoiled-rotten-looking boy cat that I've seen since I lost my legendary & inimitable Boy Cat. Different fur, slightly different build, different faces, but I can spot pure, genetically-relaxed, to-the-bone spoiled-rotten kitteh NIRVANA, and YOUR boy has got it in SPADES, son. That curled-up kitteh is just OOZING the soft, mellow, understated & sleekly-streamlined PURE contentment that only cats & the Buddha can smirk about, even though they are loving, sharing, joyous smirks. (TIBETAN Buddha images/statuary, not the cliche' racist-by-the-Japanese MOCKERY of the Buddha with the ignorant, obese guffaws that resemble him not one whit)

See why I want to come back as one of our Wo'C CATS in my next life? I think that I've already pre-paid for my passage to that higher plane just based solely on the past 40 years. Or even a higher PLAIN would suit me, as long as there's a nice big century-plus live-oak tree for shade...

I would ask you to e-mail me a copy of that kitteh-picture, Carl, if this machine weren't trying its DAMNEDEST to DIE ON ME --- a dear woman @ the Maple Leaf reading last Sunday sent me VIDEO of myself AND pictures from my brief read (yeah, I know, "BRIEF"?!?!? ME??? Yup.) then, and for the life of me, I can't make this fucking machine co-operate with HO-mail OR its own picture software to even OPEN the fucking things!!!

That'll show ME to allow Adobe to "update" MY flash software, huh!!!

And yes, if anyone has ANY idea how I can go back in time and PREVENT THAT TIME-BOMB "UPDATE" fuck-up MY entire machine AND my ability to view ANY & ALL VIDEOS & MANY PICTURES ONLINE --- PLEASE SHARE, WON'T Y'ALL????