Happy (Sins of the) Fathers Day!


It's Father's Day, when our thoughts turn to dear old Dad. And if they don't, well maybe your dad was like one of these: 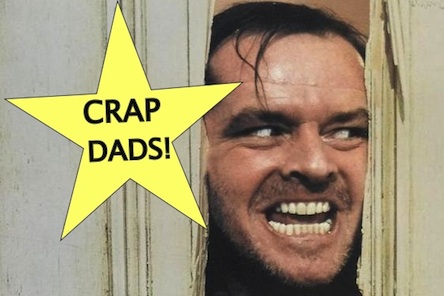 DAN SCOTT  (Paul Johansson, who fans of Soapdish  might remember) on One Tree Hill. Fathered sons with two different women, raising one but abandoning the other, and then pitted the boys against each other. And that was just the beginning for one of TV's best prime-time Soap Bad Dads since J.R. Ewing. He also killed his brother, who was like a surrogate father to the kid he abandoned.

CORBETT STACKHOUSE (Jeffrey Nicholas Brown) on True Blood. In an effort to to prevent his daughter Sookie from being trapped in an arranged marriage to a 5,000  old vampire faerie (don't ask), Corbett took a drastic measure: attempting to kill Sookie. Well...that's...one way, I suppose.

EDWARD MURDSTONE (Basil Rathbone) in David Copperfield (1935). In what is arguably the best adaptation of the Dickens novel, Rathbone gives a chilling portrait of David's abusive stepfather. It's all the more impressive when you learn Rathbone was a decent chap who didn't enjoy being mean to little Freddie Bartholomew. (Who the hell would? I mean, it's like wanting to take a sledgehammer to a basket of puppies.)

JAMES TYRONE (Ralph Richardson) in Long Day's Journey Into Night (1962). Poor Jimmy and Edmund -- they really got screwed over in the parents department. Their mom's a junkie (as previously noted last month), and their dad is such a tightwad that he looks for the cheapest available healthcare facility when Edmund develops TB, since after all, if the kid's dying anyway, why go overboard?

OLIVER BARRETT III (Ray Milland) in Love Story (1970). I can't do better than MAD magazine's assessment of the character in their spoof "Lover's Story":
"He's a old-fashioned. You know--a throwback to the '40's"
"You mean a little like Cary Grant?"
"No, I mean a lot like Adolph Hitler."

BYRON MAYO (Robert Loggia) in An Officer & A Gentleman (1982) Usually when you think of father-son activities, they involve playing ball or fishing, or building something together. Not getting drunk off your ass and taking him with you to bang hookers. Unless what you're trying to build with him is resentment and lifelong issues with women.

TRAVERS GOFF (Colin Farrell) in Saving Mr. Banks (2013). The nicest dad on this list, like Jimmy Nolan in A Tree Grows In Brooklyn, his heart was in the right place, but he was a drunken terminal fuck-up. Then again, his daughter grew up to be best-selling author P.L. Travers, so maybe if he hadn't screwed up, we'd have never had Mary Poppins.

I could probably have come up with a longer list but I had to work both Saturday and today, which sapped up the time and energy I usually have to do these. Hopefully some of you will be able to offer prime suggestions for next year's list.

Until then, the toads are eating dinner, so it's time to go to bed.

(Previous entries in this series here, here, and here.)
Posted by Scott at 4:39 PM

the toads are eating dinner, so it's time to go to bed

That means the Russkies are done fluoridatin' the water, and they're launching the nukes! RIGHT?
~

D is for Drugs, as in, under the influence of -- but they must have been really good ones.

Speaking of awful dads and Ralph Richardson, there's also his role as Olivia de Havilland's overly protective -- and mentally abusive -- Victorian Dad, Dr. Austin Sloper, in The Heiress (1949). Cold, tyrannical, convinced he's got her best interests at heart at the same time he's constantly harping on her unmarriageability, due to her plain looks and dullness. In his own special way, this one's every bit as nasty a piece of work as the elder Tyrone.

Speaking of Basil Rathbone, he played Dr. Sloper on the stage, and very much wanted to reprise the role in Wyler's film. Especially since Errol Flynn was originally slated to play Morris Townsend. With de Havilland in the cast, too, that would have made for one interesting reunion. Although it's hard for me to imagine anyone doing a better job than Richardson and Clift in those roles.

No Tywin Lannister? I protest!

I included Austin Sloper in a previous Father's Day list (the second year I began doing them, I think). Austin was a nasty piece of work if he was able to convince a daughter who looked like Olivia DeHavallind that she was an unattractive loser.

I mean, it's like wanting to take a sledgehammer to a basket of puppies.


well, there's a certain amount of tenderising you need to do before flambeing them in kitten blood /dick cheney ;}