After You, After Earth

It's like Battlefield Earth meets Mutual of Omaha's Wild Kingdom, and goes on a 10K Fun Run! 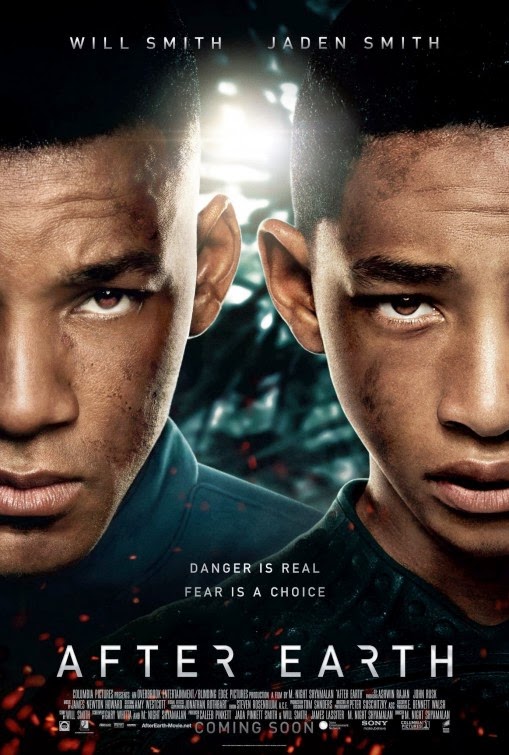 Will Smith is having a crappy day. He's on a space ship that appears to be in trouble, because oxygen masks have dropped from the overhead bins and his son Jaden is being a total puss about it; then the fuselage rips open and explosive decompression sucks him down the cabin toward Economy; and to top it all off, he's in an M. Night Shyamalan movie. But that's nothing compared to the uncontrolled skid our day's about to take, when we cut to Jaden lying in a field of clover after the crash and waxing poetic about what a paradise Earth used to be, and realize that Daddy's Little Diminished Return is our narrator.

Jaden rolls some grainy TV disaster footage, and in a mush-mouthed monotone explains that human beings ruined Earth by failing to convert to Scientology in time. Fortunately, a thousand years ago the Ranger Corps was formed to keep Mankind's few remaining picnic baskets safe from bears. They also led us to a replacement homeworld, Nova Prime, but our new alien neighbors, concerned about property values, spliced up a batch of legally blind monsters to prevent us from building tacky McMansions in the Delta Quadrant. The Mr. Magoo monsters don't need to see, because they can smell our fear hormones, but they were no match for "The Prime Commander, Cypher Raige" (Will Smith) "the original Ghost." It seems Ranger Raige is Daredevil, The Man Without Fear, and because the monsters can't smell his hormones, he can just saunter around and chop their heads off. "This phenomena is called 'Ghosting,'" Jaden explains, not that we asked him. At least, I think that's what he said; thanks to the mumbly, unintelligible way Jaden delivers the back story, he sounds less like he's narrating a sci-fi action movie and more like he's in a dentist's chair, counting backward from a hundred while the sodium pentathol kicks in.

Three Days Earlier. Space Cadet Jaden gets called to the office of head Space Ranger, Rocky Jones, who tells Jaden that he's tops in all his classes at the Academy and so darn awesome that it's actually kind of hilarious, but he hasn't achieved a state of "clear" yet, so he's going to hold him back for a year. Jaden is heartbroken, but he would never use the fact that his father is The Prime Commander in order to get special treatment, until he realizes that it worked pretty well getting him the lead in this movie, so he whines and says his dad is coming home tonight so he has to be a Ranger. Rocky Jones is unmoved, probably because he starred in a mid-50s kids show and hates the little bastards.

Prime Commander Cypher Raige has no fear, but plenty of rage, and when Jaden mumbles about flunking out, he screams at him for being a puss, stopping just short of punching him in the face and quipping, "Welcome to After Earth!"

Mother Raige reaches into the Movie Motivations Rolodex and pulls out the old "You're a Great Man but a Bad Father" speech. Will decides to take his son to the planet Effetos, where Jaden will presumably seem butch in comparison to the native Effetes.

Will and Jaden climb into a giant metal stingray and fly off into space. They've brought along a huge, mysterious tandoori oven containing one of the human-slaughtering Magoo monsters, but TSA drew the line at Will's cuticle scissors and 12-oz bottle of conditioner.

Suddenly, Will presses his high school class ring against the bulkhead, because he's sensing an asteroid storm. Sure enough, the Good Ship Stingray suffers "graviton expansion," which is bad, because it's nearly swimsuit season, and they get pelted with asteroids (me, I'm not a vengeful person, and would have settled for overripe fruit). Will orders the pilots to jump blindly into a wormhole, and through the wildest coincidence ever, it just happens to drop them off within convenient crashing distance of Earth. Which is where we came in.

By another amazing coincidence, Will and Jaden are the only survivors. But Will's legs are broken, and the tail of the ship, containing the distress beacon, is a hundred kilometers away, so his puss of a son is their only hope. Even worse, the puss wants a hug. Like I said: crappy day.

Will tells Jaden that they're on Earth, "where everything has evolved to kill humans," then hands the kid his personal weapon, a tubular Magoo chopper with multiple settings like a Swiss Army Knife, or a Vegematic.

Jaden walks through one of those fern-filled forests from a relaxation video. But when he's suddenly charged by a troop of enraged baboons, Will saves the terrified boy by quoting from a Zig Zigler motivational tape ("Recognize your power. This will be your creation...").  Jaden's creation is to run like a ninny until he falls into a river and gets bitten by one of those rubber cockroaches you stick on the refrigerator at Halloween, then go into anaphylactic shock. He manages to reach his epi-pen in time, but with this sequence Shyamalan has established just how dangerous Earth is to Jaden, and I fear that long before our hero reaches the tail section, he'll accidentally eat a Snickers and get felled by a peanut allergy.

During all the running and falling, Jaden breaks his asthma inhaler, and his dad says playtime is over, and he has to come in early. But Jaden is irked because he had to watch a Magoo kill his sister in a flashback, so he jumps off a cliff and turns into Rocky the Flying Squirrel. He glides around in front of a green screen, making pretty good time until he gets plucked out of the sky by one of those giant eagles from Lord of the Rings and wakes up in a nest among its hatchlings. He hasn't done much right so far, but one thing you can say for Jaden, he managed to be too big for a bird devour and vomit him into the mouths of its young. Let that be his epitaph. Please.

Jaden builds a raft, then floats downstream and hallucinates his dead sister, who tells him it was okay that he hid like a puss when she died, but he still feels guilty so he recites Moby Dick at her (I've found this is actually a good way to end most any argument. Not win, necessarily, but end). Then he suddenly comes down with hypothermia and starts freezing to death because even though the Earth is covered in jungle vegetation, the whole world ices over every night. I'm not sure how that works, but it's probably the reason humanity evacuated the planet, because I assume most people are like me and too lazy to put rubbing alcohol in their wiper fluid.

Fortunately for everyone concerned except us, the eagle who found Jaden unappetizing finds him again, and builds a nest to keep him warm, then freezes to death in his place. So everything on Earth has evolved to kill humans, unless Will Smith's kid is involved, in which case they'll happily commit suicide. I totally believe this, because I'm starting to feel the same way.

Jaden discovers the tail of the space ship and finds some more asthma inhalers in the junk drawer. He also comes upon the broken tandoori oven -- so the Magoo is loose. This is even worse than the Juice being Loose, because for one thing, it doesn't really rhyme. Jaden tries to contact Will, but he's in a dead zone and can't get a signal. Damn AT&T. The distress beacon won't work either, but by another amazing coincidence, the volcano from the cover of Dianetics is right next door, and Jaden realizes if he can just reach the top, he'll be able to call his personal assistant.

Sadly, Jaden's pussiness is also reaching a peak, and rather than "ghosting," he's overexcited and breathing hard and raising a cloud of pheromones so thick it's like the mosh pit at a One Direction concert. He tries to be stealthy by creeping into a lava tube, but the monster catches up with him in Shelob's lair. Will is watching all this somehow -- maybe the director sent him a screener -- but he doesn't seem any more interested in it than we are.

It's about time for one of those famous Shyamalan twist endings; perhaps the audience has been dead the entire time, and this movie is just proof that Hell exists. Instead, in an untwisted non-surprise, Jaden finally learns to "ghost," which seems to mainly involve playing dead, so I don't know why we didn't just fight the monster invasion with some well-trained Golden Retrievers.  Anyway, the Magoo can't find him. Jaden wields hisVegematic, and he and the monster play a weird game of "Marco Polo" to the death. Then Jaden notices that he's got full bars, and calls home. A rescue ship picks them up, and medics slave over Will as he bleeds out on a gurney. But when he sees his son, he insists on standing up on his two broken legs and saluting him as a Ranger. But the puss just wants a hug.

So, what have we learned from After Earth?  Never let them see you sweat, because your enemies can smell your fear, but fortunately, L. Ron Hubbard is like deodorant for your mind.
Posted by Scott at 1:59 AM

Bravo! Wonderful take down of a silly and self important film.

Is there such a thing as a movie so bad Nelson, Murphy and Corbett just have to take a pass? Could be! And the only way I'd subject myself to this turkey is if they roasted it...

Thanks, guys! Always nice to know the pain ain't been in vain for nothin'.

The pain in vain is mainly from the strain...

I think he's got it!