Are You Too Smart For Clickbait? Take This Quiz!

Today is the birthday of longtime Crapper The Minx, and Wo'C Cub Reporter Bill S. (check out his many witty posts in the Bill S.ssays tab on your right), so I've been wading through wingnuts all evening, trying to find someone -- anyone -- who isn't so aroused by the violence surrounding Donald Trump's campaign that they're calling for a Beer Hall Putsch (because beer goes straight to my hips, so the best I could do is an Amstel Light Putsch, and even then I'd have to avoid the Vienna Frank fondue and just have some celery sticks, or maybe a handful of Craisins).

But then s.z. very kindly wrote her own version of those pop quizzes for which Facebook is so justly famous (you know the ones -- Which Cowsill Are You?, or How Well Do You Really Know Larry Hovis?) and I figured taking it would be a lot more fun than reading Pat Buchanan's syndicated column demanding lebensraum for his jowls. 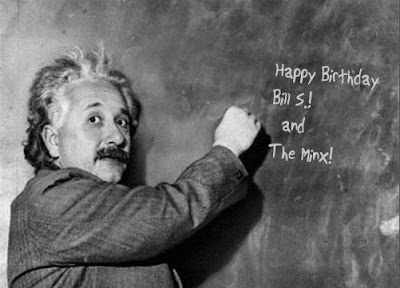 How Smart Are You?

Take this quiz and find out. Most of your friends will only get 1-2 answers right. Albert Einstein only got 6 questions right. How will you do?

2. Which is not one of the 50 states in the United States of America?
a. North Dakota
b. West Virginia
c. New Mexico
d. Home Depot

4. On the TV show "19 Kids and Counting," what were they counting?
a. Fingers and toes
b. Sweet reality show money
c. Criminal offenses and sins
d. Crows

6. In poker, the only hand that beats a straight flush is:
a. Four of a kind
b. A royal flush
c. A full house
d. A Fuller House, starring the original cast except for the Olsen twins, who are dead or something

7. Presidential candidate Donald Trump is the incumbant senator from:
a. East Virginia
b. Freedonia
c. Shutter Island
d. None of the above
e. Just Another Brick in the Wall

10. Energy equals mass multiplied by:
a. The speed of light squared
b. Four-Hour Energy drink
c. A threat from your boss
d. Meth

Please tally up your score and let us know how you did in the comments. If you didn't do well, make up your own questions and put those in the comments, and then when we can't answer them, we'll be the ones who look like morons.

And now...time for dessert! Bill was good enough to not only message me with beefcake suggestions, but even suggest a theme -- O! Canada!, in honor of the state visit by Canadian Prime Minister Trudeau the Younger and Hotter. So as requested, here's Maple Leafer Ryan Reynolds... 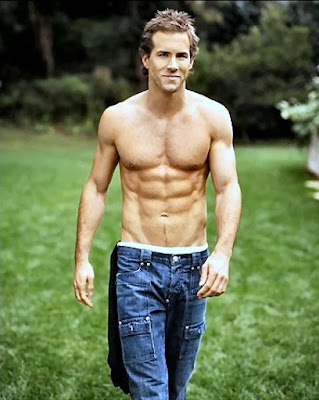 Hey, girl. How do you like my segmented thorax?

The Minx didn't submit a request this year, so I'm going to default, as is my wont, to Golden Age Hollywood, and offer up this lovely portrait of a young Loretta Young... 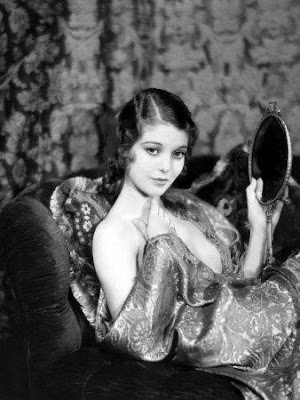 Um, sir? I don't mean to get personal, but your pants appear to have exploded...

All right, put on your party hats, 'cause we're bringin' out the cake...! 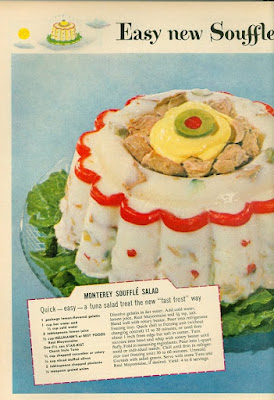 No, you're not dreaming! It really is that tuna and mayonnaise Jello all the kids have been talking about (and don't think we skimped on the chopped pimiento!).  The curious thing about this dessert is that the directions say "Yield: 4 to 6 servings", and yet, even when you've served all 4 to 6 of your guests, you'll find you still have 4 to 6 servings left.  Some quirk of quantum mechanics, I guess, and probably why physicists refer to this dish as "Schrödinger's cat food."

Please join me in wishing The Minx and Bill S. (or Bill S! as he is legally known on this date) a very happy natal anniversary. And now...enjoy our traditional... 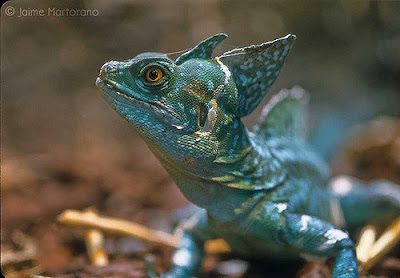 Sexy Birthday Lizard!
Posted by Scott at 12:16 AM

That soufflé -- it's staring at me!

Add some boiled asparagus tentacles to that, and you'd have the first ever item of cuisine modeled after The Crawling Eye.

Happy birthday, The Minx (incidentally, "minx" is one of my favorite words) and Bill S.

Thank you very much!

The very scary thing about that desert is that my wife's Mother made that for her and the family at one point. And yet no one was ever turned into Children Services.

Well, THANK YOU for the birthday quiz! Considering I only got medical bullshit to deal with, the cheesecake picture is much appreciated! Please make ALL BIRTHDAY PICTURES NAUGHTY CHEESECAKE PICTURES OF THE LADIES, although Justin Tredeau may make me reconsider the attractiveness of studly World Leaders (Vlad Putin EXCLUDED). This birthday deserves lots of drunken delightedness and cake since my 50th was a corker-- I was diagnosed with Stiff Person Syndrome, it's also International Stiff Person Syndrome Awareness Day, a neurological disease that reportedly occurs in one in one million people (Google will be your friend here). The lovely disease which causes spontaneous isn't terminal-- but Scott & Sherri, when is volume 2 coming out of "Better Living Through Bad Movies" coming out? Not that I'm nagging or anything.

A correction: Stiff Person Syndrome causes your muscles to spontaneously contract, you often fall on your face. I'm more concerned about my expensive glasses than my face. If you are startled by even light touch, loud noise (such as a car horn) or emotional distress various body parts can either go completely slack or become rather cement like.

Happy Birthday to the birthday people. That is one sassy lizard!
~

Oh, that Stiff Person Syndrome. Thank god I have the other one.

And Happy Birthday, both of you.