"We're Gonna Build a Wall And Monsters Will Pay For It"

Thanks to Bill S. for keeping the Skelly Awards going for a fifth consecutive year, for enduring the existential pain of sitting through the worst movies made by the Best Actor nominees, and for not screwing everything up like PricewaterhouseCooper. 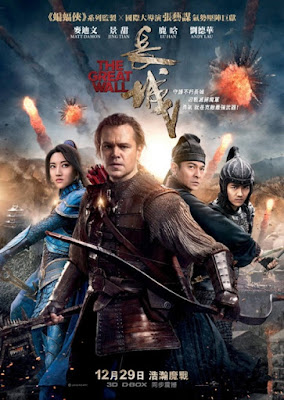 ...Jimmy Kimmel noted that Matt Damon palmed off an Oscar-worthy (and winning) role on his friend's kid brother so he could go off to make "a Chinese ponytail movie" which nobody saw. Except us. Yes, it's time for another Slumgullion. This episode Jeff is Where's Waldoing it, but the New Movie Crew joins me to talk about Star Wars toys, underrated Sci-Fi and Fantasy films, and The Great Wall (2016). Check it out, then join longtime Crapper and multi-media raconteur Doc Logan in the comments section for a weenie roast and some Monster A-Go-Go references.


Or subscribe to us on iTunes.
Posted by Scott at 9:25 PM

If Matt gets another acting nomination, this will likely put him in the running for a SKELLY. (BTW, writing these columns has really screwed up my ability to enjoy GOOD movies. When I was watching "Sully", I thought to myself, "Gosh, I hope Tom Hanks gets nominated, because he's really good and it'll make up for him not getting nominated for his recent fine work in CAPTAIN PHILLIPS, SAVING MR. BANKS and BRIDGE OF SPIES. And also, it'll give me an excuse to write about a really preposterous film he did in the early '80's"

You mean that hilariously earnest exposé of Dungeons & Dragons?

BTW, writing these columns has really screwed up my ability to enjoy GOOD movies.

Welcome to the club, Bill.