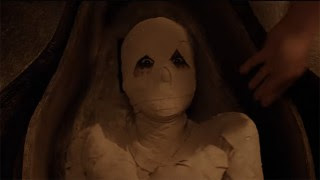 Well, things have gone South, Sideways, and To Hell, all in one awkward, but awe-inspiring motion -- the sort of thing that could only be pulled off by a Cirque du Soleil acrobat who's been drinking between shows.

On Friday, Mary slipped and fell on the stairs to the ladies room at the Chinese Theater (during a screening of Wonder Woman -- O Irony, thou cruel mistress), dislocated her ankle and fractured three bones ("a hat trick!" as our friend Dr. Alice observed). So rather than watching Gal Gadot kick ass, we spent most of the evening in the Emergency Room, where they relocated her ankle to a better neighborhood, applied a cast, and said, "Yeah, you'll need surgery."

The weekend passed slowly, relieved by moments of eye-rolling terror when it looked like Mary was going to fall off her crutches (again, on the way to the bathroom). Monday we consulted an orthopedic surgeon, who was of the opinion that her ankle had been set improperly, and she needed immediate surgery. So it was off to the Emergency Room again, where Mary spent four hours in an uncomfortable chair in the Waiting area, then another seven hours on a gurney in a hallway. It was a cruel test of endurance and after awhile I couldn't stand it anymore, so I started to pretend I was watching a David Blaine TV special.

And that's where things stand. I'm heading back to the hospital, where the surgery will (we're desperately hoping) take place this afternoon. I'll update as soon as there's news and a wifi signal I can steal.  In the meantime, prayers and good wishes gratefully accepted.
Posted by Scott at 12:26 PM

There's always wi-fi at the hospital. Ask the lady at the front desk for the information. Some hospitals have a Starbucks-y set up where you can get coffee. Don't drink it in front of Mary. She's likely been fasting for the last 12 hours(if your numbers are correct), and they won't let her eat or drink anything. So hide in the men's room stall with your latte. Remember not to use a wide stance.
Hopefully, they've given Mary good drugs. Make sure she gets them.
Go back to the theater, and check out the lighting where she fell. Also find out which nurse or physical therapist taught her how to use crutches. She should have had a physical therapist teach her to use them correctly (Minx has had ankle surgery). If she wasn't taught, get the name of her doctor. Find the sleaziest lawyer in L.A. (I'm sure that won't be hard, there's probably a directory of them) and proceed to sue the doctor and the hospital for irresponsibility. Seriously, if a nurse or Physical Therapist show her how to use those crutches, you have a case. But, most importantly, make sure Mary gets her pain meds on time (think hospital scene in Steel Magnolias). Double check that all other drugs were meant for her. Have her name on them. Be a pest. Ask about every procedure and every drug.

With Much Love from
~The Minx~

All the good thoughts and I can muster are headed your way. What a horrible experience! I'm so, so sorry.

Sending good vibes, whatever they're worth.

I'm so, so sorry! Please take good care, and I hope the surgery and subsequent healing is successful and swift!