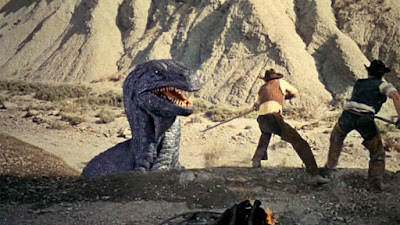 Some friends took us to see Cowboys & Aliens on Saturday, and for a 7 PM show on opening weekend, the crowd was surprisingly light.  Jon Favreau, who was introducing a Q&A for Attack the Block next door, wandered in just before the lights went down, surveyed the sparsely populated auditorium, and said, "So you're the people who couldn't get into The Smurfs?"

There's been some speculation -- which Favreau alluded to -- that moviegoers have reacted like the antagonists in a Reece's Peanut Butter Cup commercial, complaining about cowboys in their aliens, and vice versa, without actually tasting it.  For the record, I enjoyed the movie -- as a western, and as an alien invasion movie, both of which forms are a little neurasthenic and overbred by this late date, and both of which could benefit from the kind of genre-splicing that stops just short of parody.  It's sort of a steampunk Independence Day, without the constant, rash-inducing, sand-under-the-waistband-of-your-swimsuit irritation of Judd Hirsch and Bill Pullman, who I think has finally found the role he was born to play, the pedophile serial killer on Torchwood: Miracle Day.

However, as longtime readers have probably noticed, I don't write about films I like, partly because there are plenty of people on the internet who do that sort of thing better, but mainly because my critical faculties have been warped by years of looking at any moving image with the jaundiced, Better Living Through Bad Movies eye, leaving me to promptly and often pointlessly reach for the reductio ad snark. So instead, check out D.Sidhe's thoughts on the flick (Can We Try Cowboys And Sharks Next?), then enjoy her take on Piranha 3D.

Speaking of razor-toothed horrors of the sea, our friend Actor212 has some pensées on Shark Week from the perspective of a man who spends almost as much time underwater as a mako.
Posted by Scott at 2:07 PM

Email ThisBlogThis!Share to TwitterShare to FacebookShare to Pinterest
Labels: Movies, Now a word from our sponsor

Amusing line from a review:

Gunfight at the E.T. Corral.

I'm I'm probably going to like "Dinosaurs vs UFOs", too.

We almost went to see Attack the Block, but I was having a can't-sort-out-accents day. It's on my list though.

And as I noted, my partner is holding out for Cops & Dragons.

Admit it, Scott: regardless of whether they actually made a decent flick, the title alone made you sigh in admiration. As a simple three-word pitch, it's simply irresistible!

Oh, I freely admit it, Chris. Getting that idea must have felt like picking up a hundred dollar bill off the pavement after a thousand other people had blithely walked over it.

Although I'd also pay to see Cops & Dragons.