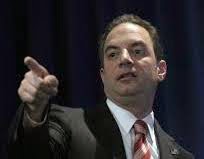 I'm terrible at anagrams, so could somebody clue me in and tell me what Reince's real name is?