In response to yesterday's post, ifthethunderdontgetya™³²®© accused us of spreading pro-Hellmann's propaganda, insisting that only Miracle Whip had the intestinal fortitude to stand up to Skippy. Which reminded me of a photo I snapped one day while loitering at the intersection of Hollywood Boulevard and Cahuenga -- known to fans of meaningless honorifics as "Raymond Chandler Square."

A billboard was being stripped down to the wood, and the bottom-most stratum revealed an artifact from the Age of EXTREME DIET MAYONNAISE SUBSTITUTES! 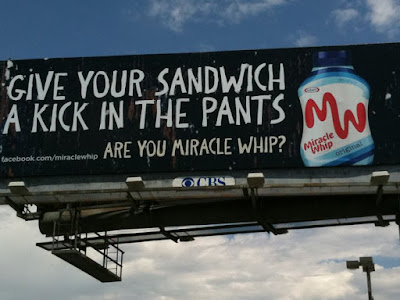 Remember when Miracle Whip was the new Mountain Dew, and all the kidz were chillin' with their MW?

[Full disclosure: I myself was never MW, because I instinctively grasped that a man of my advanced years would appear inauthentic with his butt hanging out of low-riding pants, texting his brahs on his Sidekick while smearing slices of toast with a low cholesterol sandwich spread.]
Posted by Scott at 12:14 PM

Email ThisBlogThis!Share to TwitterShare to FacebookShare to Pinterest
Labels: Food Glorious Food, For No Good Reason

Miracle Whip is an abomination to man and should be eschewed.

Later, as we kids fledged and left the house, we went with real mayonnaise. But on the down low.
~

Again. ... as long as one pronounces the H. Be like Stewie!

Thunder, my mom was the best. We may have had margarine for butter through the years of poverty but Miracle Whip never entered the house. There was always a jar of Best Foods in the fridge, Hellman's after we moved east, and we ate it with peanut butter and iceberg lettuce. Occasionally a banana.

Dammit! I love Miracle Whip and am not shy to say it!! To me, mayonnaise tastes like grade school paste. Nothing like the "bread spread from Kraft".