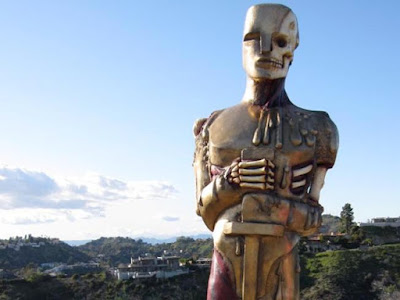 Before I begin this column, here's a trivia challenge for all of you-see if you can identify the voice of the actor playing the Yellow M&M in this commercial. I have the answer at the end (no cheating by scrolling down)

Folks, the Academy Awards are airing this Sunday, and that means it's time for me to peruse the nominees in the four acting categories (Best Actor, Actress, Supporting Actor and Supporting Actress) and determine who among then deserves the SKELLY Award for most embarrassing prior role (or "skeleton in the closet"). According the rules I invented for this Award I invented, if one of the nominees already competed or won in a previous year, they are ineligible this year. That's good news for Jennifer Lawrence (who made the list in the first year for her role on "The Bill Engvall Show"), Christian Bale (who made the list in the second year for the ineffable Swing Kids), and Leonardo DiCaprio (who also made the list in the second year, for his role in Critters 3). I'm pretty sure the SKELLY is one award Leo definitely doesn't want to win. But before I reveal this year's lucky recipient, let's have a look at the runners-up.

She began her career as a child actress, working in television in the late '70's, and made her feature film debut in 1981. Back in the '80's, most juvenile actors broke into films one of two ways: a gross, stupid teen sexy comedy, or a gross, stupid slasher film. In her case, it was the latter, something called Eyes of A Stranger. 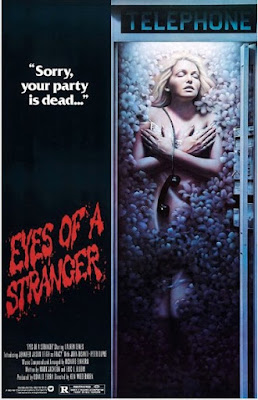 The star of the movie was Lauren Tewes, AKA Julie McCoy on "The Love Boat"("Death! Exciting and new/climb aboard, we'll dismember you....") as a reporter who's being stalked by a serial killer. Leigh played her kid sister, who happens to be blind. The girl becomes one of the killer's targets. The results aren't exactly Wait Until Dark. It's more like, "I can't wait til this stupid thing is over."

After recurring roles on a pair of British TV series, Kate landed a starring role in her first film, Peter Jackson's Heavenly Creatures, an impressive film debut. Looking back, it's surprising she didn't receive an Oscar nomination right out of the gate for that. She'd have to wait another whole year to get one for Sense & Sensibility. Between that one and the blockbuster Titanic, she took an unfortunate detour into a forgettable Disney flick, A Kid In King Arthur's Court.

The titular character, a modern-day teen who's transported back in time to the days of King Arthur, was played by Thomas Ian Nicholas AKA "The guy in American Pie who wasn't Stifler, Finch, or Jim. No, not that guy, you're thinking of Chris Klein, I meant the other other guy." Kate was saddled with playing the only Disney princess no child has ever wanted to dress up as, and her love interest was played by a pre-Bond Daniel Craig, sporty a floppy hairdo more suited for swinging '60's London than the days of King Arthur.

His part in Trumbo is his best film role to date, and if he wins for it, he'll be three-quarters of the way to being an EGOT, having already won a Tony and many, many Emmys. As well he should, since he's been a welcome presence in nearly every TV show, whether a guest star or lead. But there was one series even he couldn't save: "The Louie Show", which aired for one season back in 1996. It was intended as a vehicle for comedian Louie Anderson, who played a therapist. I have to confess that I'd never heard of this show until I was researching actors' credits for this column, and it's so obscure I had a hard time even finding clips of it online. But I did find a couple, and here's one. Bryan, who play's Louie's best friend, doesn't appear until the 3:48 mark, but you'll probably stop watching long before that, because the transitional music is so awful, it could be used to extract confessions from prisoners.

Anderson reportedly hated this show, and he wasn't alone -- it was canceled after just 6 episodes (one of which never aired). He and Cranston and the rest of the cast and crew moved on to better projects, by which I mean, anything they pulled a paycheck for immediately after.

In this 2002 Happy Madison production (red flag right there!), Rachel played Jessica, a pretty, popular teen who rules her school and pushes less popular kids around. She gets her comeuppance when a curse is placed on her, and she wakes up to find that she's been turned into ROB SCHNEIDER. Wait, is this supposed to be a comedy, or a horror film?

I guess that answers the question. This is the worst body swap movie since Like Father, Like Son. And fuel for our nightmares.

She's been acting for 50 years, which means she's had more than a few career ups and down. For example, she filmed scenes for Vanishing Point , but they were cut from the final print. I'd like to have been a fly on the wall when that decision was made:

"That British dame who looks like she could be Lauren Bacall's daughter -- lose her."

"What about the purse-clutching nelly queens who rob the hero? Should we cut that?"

Having dodged that bullet, Rampling was free to star in one of the most insane fantasy films ever made: ZARDOZ. 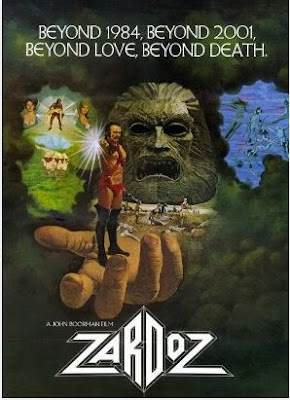 This futuristic tale of two tribes, the Eternals (who live in a land called the Vortex, where nobody dies and everything is "perfect"), and the Brutals, who live in the Outlands, where people are killed for a false god (Zardoz) and life is harsh, has a following. It's in volume 2 of Danny Peary's books on Cult Films. I imagine a large part of that cult consists of repeat viewers who just can't believe WTF they just saw. In just the first 10 minutes, we're treated to a man with a drawn-on pubescent beard explaining the film's premise, a giant floating head telling a crowd that "The gun is good, penises are evil", and Sean Connery in a red mankini stumbling on a bunch of naked people who've been shrink-wrapped (to lock in freshness?). Charlotte Rampling plays Consuela, one of the Eternals, whom Peary likened to a prudish PTA member -- an apt comparison. If she were wearing pearls, she'd be clutching them for half the film, until she suddenly, without explanation, falls in love with Connery, telling him, "In hunting you, I have become you" (Say what?)

I will say this: Zardoz is the most entertaining movie on this list. Entertaining mainly because every single frame of it, from the first to last, is so bugfuck insane it's unintentionally funny. Which gives it a slight edge over the movie that determined this year's winner of the Fourth Annual Skelly Award:

Sly's first speaking part was a bit role in Bananas, and his first full-fledged starring role was in The Lords of Flatbush. Despite a mediocre script and a horrible score (courtesy of Joe Brooks) I have a certain affection for it. He and co-stars Henry Winkler and Perry King have enough charm to keep it watchable, and it does contain one scene that actually made me laugh out loud, when Stallone's character caves in to pressure from his girlfriend to marry her ("I love you. BUY ME THAT RING!!!") That's one funny scene more than can be found in what's not only his worst movie, but the worst movie of the 90's. I'm talking of course, about STOP! OR MY MOM WILL SHOOT!

Or as I call it, Stop Watching, Or You'll Want To Shoot Yourself.

Full disclosure: I was actually going to write a column on this movie about three years ago. I rented it, watched it multiple times, and took down notes about it, and then, for reasons I don't recall now, just didn't get around to writing it. I considered doing it again when Creed hit theaters, but I did not want to watch it again.

But I doubt I could have done a better job making fun of it than the star of the film himself. Here now, are some quotes from Sylvester Stallone, on the film he acknowledges was the worst of his career:

"Maybe one of the worst films in the entire solar system, including alien productions we've never seen."

"In some countries -- China, I believe -- running [the movie] once a week on government television has lowered the birth rate to zero. If they ran it twice a week, I believe in twenty years China would be extinct."

"A flatworm could write a better script."

And now, the answer to my opening trivia question:

The voice of Yellow is none other than last year's winner of the Best Supporting Actor Oscar, Whiplash star J.K. Simmons!
Posted by Scott at 6:08 PM

Excellent answer to the OSCARS, Bill S. Even if you did bring up memories of ZARDOZ. ;)

I'd much rather read this blog than watch the Oscars!

Zardoz is the most entertaining movie on this list.

To fully appreciate the weirdness of Zardoz, though, you have to see it on the big screen. I had the paperback novelization once upon a time; IIRC, in the foreword Boorman claimed the story was inspired by a dream. Which might explain a few things.

Embarrassing as it may be, I have to confess to a certain fondness for the film. Just think of the Vortex as the ultimate gated community, and the Eternals as billionaire spawn, and it all makes a lot more sense.

That does help explain, if not exactly excuse, Zardoz. Otherwise I have nothing pertinent to say on the subject, except that the movie will be prominently featured in the sequel to Better Living Through Bad Movies, in the chapter tentatively entitled Sci-Feh.