Cruz Says, "Baby, It's Cold Outside"

I was reading Roy's column on the rightblogger freakout over Donald Trump's abortion policy (the first one, where he agreed that women seeking abortion deserve "punishment," not the subsequent series of rapid fire amendments, evasions, and take-backs that made him sound like Hank Kimball from Green Acres).  As always, Roy covered the waterfront, but there was a quote toward the end that I thought offered the reader a remarkably revealing, if unwanted, glimpse into the Secret Life of Ted Cruz, Swinger:


The candidate also held a "Women for Cruz" event, gushingly covered by Tim Alberta at National Review: "Plush chairs. Stylish pillows. Purple flowers... in a gently-lit hotel ballroom, beneath elegant, glass-encased chandeliers, the man known for his hardball tactics and red-meat rhetoric attempted to show a softer side,"

So when Ted Cruz wants to talk to the ladies -- and this one's just for the ladies, sorry, fellas -- he eschews the usual noisy, fluorescent-lit hall with folding chairs and a coffee urn on a card table, and instead whisks them away to a bachelor pad straight out of the June, 1964 issue of Playboy. All that's missing is a reel-to-reel tape deck cued up with cocktail jazz, a tiger skin rug, and a collection of slightly risqué Harlequin lithographs he picked up on a business trip to Paris, but otherwise he's ready to press a highball into their hands and sweet talk them right out of their rights.

So I guess it just strikes me as odd (but somehow emblematic of this odd, odd year) that Donald Trump, the ostensible big city sophisticate has turned the abortion debate into a grungy Women in Prison movie from a 1970s drive-in ("This is gonna be a great new law, one of the best laws ever. We'll get Jess Franco to draft it in the Philippines -- legislating is cheaper there -- and we'll hire some Eurotrash blonde to star; but a classy one, like a beauty pageant winner who'll take her top off. And because this is gonna be a big, big law, we'll bring in Pam Grier to play 'Kat,' the sexually aggressive alpha female who runs the cellblock, and maybe get Dyanne Thorne for the warden."  Meanwhile, tribune of the common clay, Ted Cruz has somehow transformed into Christopher Walken as The Continental. 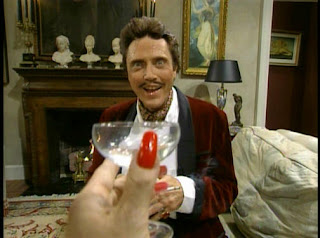 "Ah, tell me, my vision of pre-Raphaelite pulchritude...have you come here tonight to surrender the tender innocence of your civil liberties, or simply to break my heart?"
Posted by Scott at 12:05 PM

It's not you baby, it's your womb.

Little did those women know they were going to appear as props in Amy Lindsay's latest softcoreographic feature, The Secret Carnal Wishes of a
Chambermaid in the House of Cruz.

If Pastor Ted chose that venue all by hisself, without any decor input from the Missus or whoever the Cruzist version of Naomi Wolf may be, it sounds to me like his idea of a very upscale House of Bad Ladies. Purple flowers, no less. Very Elmer Gantryesque.