You know what used to really rankle me as a kid? Bait 'n' Switch sweets. You'd be stuck sitting on the couch next to "Aunt Claire" every Thanksgiving while the Dads were out on the patio "talking" (i.e., drinking), and the Moms were in the kitchen "getting dinner ready" (i.e., actually getting dinner ready. Also drinking), and there was nothing to do because the TV was in the den and nothing to talk about because she's in her 80s. Then, after a long silence that felt brutal even though it was probably no more than ten minutes because that's like three hours in kid years, she'd ask if you'd "like some candy? But don't tell your Mom" and you'd get excited, thinking she's about to sneak you a Three Musketeers Bar, or at least a Cinnamon Hot Ball Jawbreaker, and instead she roots around in her purse and pulls out a cellophane-wrapped hard candy that tastes like a shellacked mothball. And it would happen every Thanksgiving, but because you'd be so antsy and hungry and uncomfortable in your itchy wool slacks and clip-on tie, you'd fall for it, every time.

Then eventually you and your cousins became teenagers and you discovered the bottom drawer of the breakfront where Grandpa hid the airline bottles of Crown Royal and you'd sneak off to the garage to spike your Tab and feel like you're entitled to it after all those years spent babysitting Aunt Claire. But then, right around your junior year in high school you get dragged to her funeral and discover that she's not actually your aunt, she's your great-uncle's mother-in-law, so the joke's on you.

Or even worse: it's a hot, humid summer night, and you've just finished picking at your mother's spécialité de la maison, "Salmon Patties" (canned salmon formed into vague hamburger shapes, scorched to a blacktop-like crust on the outside, cold and pink on the inside), and she decides -- perhaps because she can't stand that look of numb resignation on your face anymore -- to treat you and your sister to some ice cream. The both of you get excited and think, "Yay, we're going to Wil Wright's! I'm gonna get the deluxe hot fudge sundae! Or maybe she'll take us to Swenson's, for the home-made bubble gum-flavored ice cream in a sugar cone. Or even Thrifty's Drug Store for the mint chocolate chip...!"

Then she opens up the freezer and pulls out a carton of Big Dip Ice Milk. 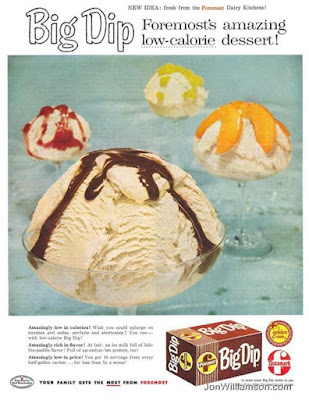 But you know what? Any of that -- the fossilized ribbon candy, the artificial ice milk -- would be preferable to this home remedy for joy: 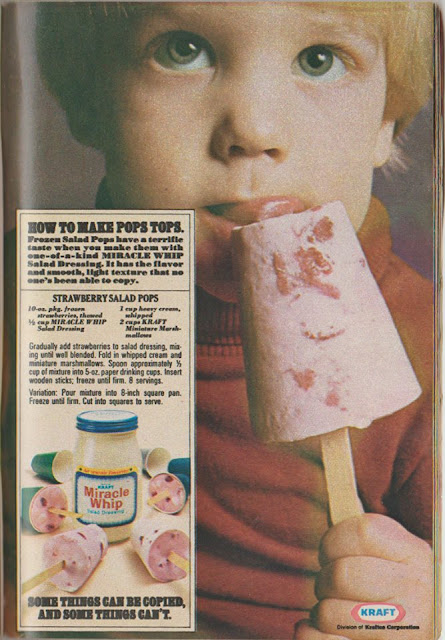 Strawberry Salad Pops. Say what you like about my mother's bargain-basement taste in frozen confections, at least she never forced this abomination on us. Probably because it would have required more time and effort than it took to upend a can of salmon into a skillet and bring it to a dental record-ready char.


HOW TO MAKE POPS TOPS

Or, How to Get Your Own Offspring to Report You to Child Protective Services.


Frozen Salad Pops have a terrific taste when you make them with one-of-a-kind MIRACLE WHIP Salad Dressing.

As truth in advertising goes, I can't actually dispute this claim.


It has the flavor and smooth, light texture that no one's been able to copy.

After eating, kids can save the wooden stick for a fun game: Tickle Your Own Gag Reflex and see who can puke it back up first!

Okay, I retract the crack about Child Protective Services. Here's a quarter, kid; call The Hague.

Anyway, I've been suffering from mal de vivre (the usual back problems that make me feel like I spend all day resting my lower spine against a high speed emery wheel) so I'm a day late with my felicitations, as yesterday was Weird Dave's legal birthdate. But I hope you'll all join me in making it up to him by wishing our resident desert-dwelling nudist the very happiest of retroactive natal anniversaries.

First up, here's a bit of classic Hollywood birthday cheesecake -- Jean Harlow, frolicking in a desert-like environment, just as Weird Dave has been known to do, and also nude, except for a diaphanous light wrap: 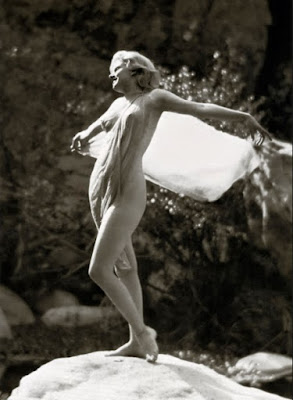 And of course, no World O' Crap birthday party would be complete without the traditional Sexy Birthday Lizard! 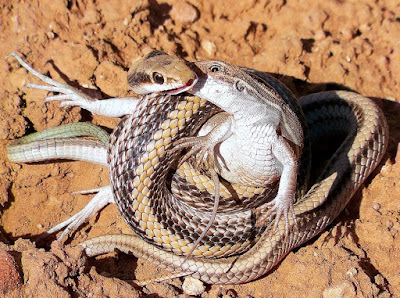 In this case, our SBL seems to be locked in mortal combat with a snake. Or perhaps it's just two dinosaurs in a Bert I. Gordon film. Anyway, Happy Birthday, WD! And thanks for being a loyal and unfailingly amusing part of our non-normal little clan.
Posted by Scott at 6:53 PM

Happiest of Birthdays, Weird Dave! Hape there's no Miracle Whip anywhere around you!

Lessee, you got strawberries--check. Heavy cream--check. Marshmallows--check. Roger Houston, we have dessert. So what in the name of all that may or may not be Holy is the fucking Miracle Whip for?!
On second thought, I don't think I wanna know.
Oh, and the SBL? It's obvious why it's an SBL, right? I mean, come on...where's the snake's other hand? Either of 'em...

Another yr., passed like nothing. Many happy late returns to one of the few who has the intestinal fortitude to comment chez moi! (Don't blame him for encouraging me.)

And remember this cliché: You're not getting older, you're ... maturing like a fine wine.

Excellent image too. The pose resemblance is uncanny.

Judging from Ms. Harlow's nipples, I'd say there must have been a bit of a cool breeze on that glorious day.

Happy BBD (Belated Birthday), Weird Dave! I seem to recall having wished you plenty of weirdness in the coming year, last time. But who could have predicted it would come by way of a vulgar talking yam? Besides, I specifically requested the good kind of weirdness. Shoulda read the fine print ....

Nothing weird about Dave if you ask me, although the parades o' issues were a but unsettling.