Let's check in with self-appointed troubadour of the Tea Party Movement, Lloyd Marcus, seen here at some sort of Colonel Sanders cos-play convention: 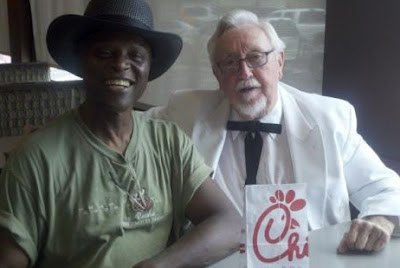 (Actually, now that I perform a bit of Google Image Search due diligence, I see that the above photo is from a recent column entitled, "Chick-fil-A Appreciation Day: Great Turnout, Few Blacks In My Town."  Apparently, Lloyd feels that living in a largely Negro-free community makes for improved public events, which probably explains his attraction to Tea Party rallies.)

A poll claims that Romney will receive zero percent of the black vote. Well, if the poll proves correct, it means that a vast majority of black voters are ignorant of the truth...or else they're racist.

That seemed a bit harsh, until I remembered that I'm planning to vote against Romney too, and if I'm going to be completely honest with myself, I have to admit that it's largely out of a sense of racial solidarity; because, like President Obama, some of my relatives are also white.


Black Christians who vote for Obama knowing his crimes against Christianity and biblical principles have chosen to worship the idol of racial loyalty over their discipleship to Jesus Christ. Pure and simple.

I bet Exodus was pretty peeved when Jesus and the Holy Ghost horned in, but then, I'm no doctrinal expert (my mother tried very hard to persuade me to become a Christian, but I was always more attracted to monotheism).


Incredibly, some blacks have completely forsaken their Christianity for Obama.

I wonder what's convincing all those white young people to abandon the church?  Probably their unhealthy fixation on Joe Biden.


A fellow PK (preacher's kid) said her parents recently changed their stance on same-sex marriage in support of their black president. I find this remarkable.

Though I disagree, I have been sympathetic and understanding with black seniors who have suffered dearly, with hearts still bearing scars of racial injustice.

LLOYD:  Mr. Johnson, pardon me for barging into your oxygen tent, but I just heard you've decided gay people shouldn't be attacked by police dogs or beaten with truncheons for demanding their civil rights, the way you were, and I just wanted to say...I forgive you."


But now that Obama has been exposed as the most anti-Christian president in U.S. history...


...senior black Christians must no longer be given a pass for supporting this man.

Get over your damn flashbacks to the Edmund Pettis bridge, Grandpa, or Lloyd's gonna turn the firehose on you and everyone in this whole damn nursing home!


At stake is something extremely important: their fellowship with Christ versus an idolatrous worship of skin color.

Blonde, blue-eyed Jesus would really like you to get over this hangup, black people.


Talk about hardcore anti-Christian beliefs: not only does Obama support abortion, but he supports infanticide -- killing babies who survive failed abortions.

Of course, this is an urban legend, but then, so is most of the Bible, so there's probably some sort of Ninth Commandment exemption for spreading it in the name of Jesus.


Obama taught Alinsky tactics to university students from a book which its author dedicated to Lucifer. Rules for Radicals was written by Saul Alinsky. Alinsky's dedication says, "...the first radical known to man who rebelled against the establishment and did it so effectively that he at least won his own kingdom - Lucifer"

Actually, that's part of the epigraph (the same page quotes Rabbi Hillel and Thomas Paine); the book is actually dedicated "to Irene."  But she was probably Satan's wife or something.


Obama's attacks on religious freedoms are numerous. Over 40 Catholic groups are suing Obama for mandating in ObamaCare that faith-based institutions provide contraception and abortion services.

It doesn't, of course.  But after years of getting sued by victims of clerical sexual abuse, the Catholics probably just got tired of the Defendant's table, and wanted to see what it was like to sit on the other side of the courtroom for once.  ("Hey, this is niiiiice.  We should complaintiff more often.")

Anyway, black people need to vote against the first black president because mostly white Catholics are squicked out by lady parts.


Incredibly, the roots of racial hatred run so insidiously deep into the hearts of some blacks who profess Christianity that Obama has their vote -- period.

That's why Republicans have worked so hard this year to reduce minority voting rights.  It's not that they want to disenfranchise blacks, they're just trying prevent a hate crime.


These blacks will claim that my facts are lies, that videos have been doctored, and that I am a paid Uncle Tom sell-out to the Republicans.

Well, I wouldn't blame it on their race, Lloyd, since I'll claim the first two out of three myself.  I don't feel I have the right to claim the last, however, because I don't honestly believe they're paying you for this shit.


In the biblical account of Christ's Passion, the law gave the mob an opportunity to free one condemned prisoner, thus saving their choice from crucifixion.

Well, it was a coupon good for One Free Prisoner, but the mob forgot to present it immediately upon ordering.


Pilate asked the crowd, do I free Jesus or Barabbas? The crowd yelled, "Give us Barabbas!" Jesus was crucified.

Which was probably a good thing in the long run, because if Barabbas had been crucified, we'd spend every December watching holiday specials like A Charlie Brown Barabbasmas, which I suspect would prove hard to say after the second mug of wassail.

But they wanted to do it on the lawn in front of City Hall, so naturally the ACLU has filed a lawsuit.


Black Christians are faced with a crucial choice: Jesus or Obama.

I didn't even realize they were competing products.  Remind me, which is the one with Flavor Crystals?


I pray that come November, a majority of black Christians will not yell, "Give us skin color!"

Because that would mean that the majority of black Christians had become albinos, which would mean The Omega Man plague was upon us, and that would suck. 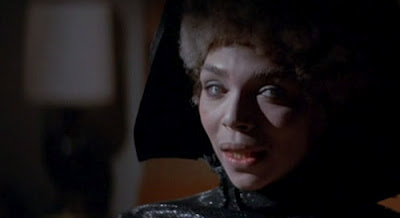 "I was concerned about protecting access to reproductive health care, preserving Pell Grant funding, and reducing unemployment, but I'm a single-issue voter now, baby!"
Posted by Scott at 1:56 AM

Getting back to that Chick-fil-A column for a moment, that he pointedly mentions how few blacks showed up to the counter-protest is interesting. It's almost like he's proud his fellow neeeegroes are tolerant and avoided Chick-fil-A that day.

Which kind of flies in the face of the fact that, without black communities, Prop 8 never stood a chance in California.

So you'd think they'd show up in droves, but for some reason, perhaps the overwhelming number of angry crackers showing up, they did not go to Chick-fil-A.

Again with the Saul Alinski references.

You know, I was unaware of the existence of Saul Alinski for all of my misspent youth and I was a very political animal back then-- as Roger Daltry said of Pete Townshend, "Oi, he's very political, 'e's a right Bob Dylan, 'e is."

It's only in the past decade that I've been made aware that he was my supposed mentor and all of my ideas were learned at his feet-- who knew?

"Rules For Radicals", Alinski's 1971 book, is enjoying a resurgence of sorts, and has never been more popular, as conservatives fall over each other at the bookstore to learn from its organizational lessons (Dick Armey bought piles and handed 'em out to Tea Party groups), and it's a good fit: Alinski was one of the first to use the phrase "take back the country".

Wikipedia tells me that Alinski was a keen Archaeologist back in the day, which makes him kinsman of mine, but includes the observation that there wasn't much work for an Archaeologist in the depression era so Alinski moved on to other stuff.

Which struck me as weird. Tut's discovery and excavation by Carter was in the late twenties; the Archaeology racket couldn't have been hotter. Seriously, this was the golden era, and it's no coincidence that Indiana Jones roamed the earth at this time.

But in any case, thank you, conservatives, for maintaining the legacy of Saul Alinski with your tirelessly stupid mischaracterizations, and especially, book purchases.

"Thou shalt have no other gods before me." -Exodus 20:3
What about side-by-side, or the two-level effect ?

If Lloyd and Herman Cain are going to vote for Romney, then Romney clearly isn't going to get zero percent of the black vote !

“Pilate asked the crowd, do I free Jesus or Barabbas? The crowd yelled, "Give us Barabbas!" Jesus was crucified” [I thought the crowd yelled “Wewease Wodewick” !]

my mother tried very hard to persuade me to become a Christian, but I was always more attracted to monotheism ...

Holy Trinity is quite an elaborate construction, IMHO.

Love that first photo. Never knew that Taj Mahal and Captain Kangaroo had played any gigs together.

That's about right. The dedication to the book is not visible in either Google Books preview nor in Amazon "surprise me" but the so-called "tactics" are mainly about how to stay on-message, not how to seduce the devil and put hexes on the NLRB.

About a third of the related books are indeed bircherite BS. One is Skoussen's The Naked Communist and a few others are dirty tricks for a-holes (as a counterpoint to Alinsky).

I was under the impression that the book was really obscure until 2008. But I recently read Rebel Rank and File and a chapter does mention it a couple of times so perhaps it just was indeed a reasonably important book.

That presumes either Lloyd or Cain count as black

Interesting that Marcus should bring this up. There's been a lot of talk in evangelical circles lately about Paul Ryan and his contradictory philosophy. Ryan has been talking up the Bible a lot in his recent speeches, but his beliefs are guided more by Objectivism, even if he doesn't mention it as much. Objectivism is overtly antithetical to Christian moral codes (including all that stuff about money, which Republicans don't bring up much for some reason) and was founded by a person who really was hostile to faith. Ryan doesn't mention this philosophy much, but all you have to do is look at his policies or read what he said before he was a national figure.

In other words, the GOP vice presidential candidate is a man who talks like Jesus while pursuing the opposite ends. I think the Rapture Ready set has a word for that kind of person.

But maybe they're on to something here. After all, if the ancient Chinese could syncretize Confucianism and Daoism, why can't conservatives do the same with Bronze Age sexual mores and contemporary Social Darwinism?

Well, given Mitt's religion, would it actually be "Obama vs Moroni"?

Close, not the usual rightie suspects but it is nothing but rw trash listed. good call!

In fact, if you wanna know what the "left wing agenda" is, you're just gonna have to visit a right wing website to find out.

I always say, we don't have an agenda; it's more like just a sense of direction: forward.