UPDATES BELOW (NOW WITH EXTRA UPDATES!)

[Note:  We're having a Beg-A-Thon this week (details here), in an effort to raise sufficient funds so we can hire George Zucco to use his influence with Ramboona to reanimate our dead car.) 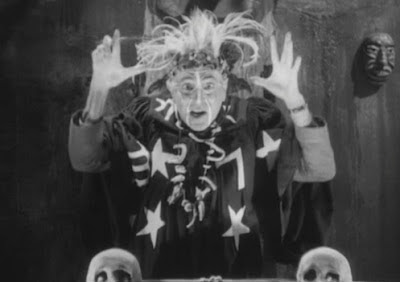 "I've called this all-staff meeting because -- as much as I hate to point fingers -- some of you people are abusing Casual Friday...!"

If you follow me on Twitter, then that would explain why the hairs at the back of my neck are standing on end and why I have the eerie sensation of being watched, even though when I spin around suddenly everyone is bending down to tie their shoe, or reading the newspaper, or gazing in department store display windows, looking all super-casual.  Not falling for it!  You've also probably noticed that I don't twat a lot (as TBogg would say), except for a more or less daily series called "Spam as a Second Language."  Basically, this involves picking the subject line from a random piece of unsolicited email and attempting to start a dialogue which I hope will evolve into a frank and informative exchange of views, although usually it just turns into me heckling a basement-dwelling Belorussian's efforts to spoof eHarmony.

Here a few recent examples of Spam as a 2nd Language:

"FIND A GOD'S MATCH FOR YOU"  Sadly, it was a trickster god, and our first date was ruined by a dribble glass.

"Do you know of new BED BUG SPREAD??" I haven't tried it, but it's got to be better than Miracle Whip.

"Get Rid Of Those JIGGLY ARMS Forever!"  I'm Venus de Milo, and I approve this message.

"scott you need emergency clash??" Yes! Excuse me while I nip into the Panic Room and blast some Sandinista!

"Fuller Hair Man"  Oh, I get it -- a very clever scam. First you buy the Fuller Hair, find it's all tangly, then the Fuller Brush Man just happens to show up.

The thing is, I get a lot of spam, so waste not, want not.   I think this is probably because I still have three or four separate America Online accounts, and even though I never send anything from them (I'm not comfortable using an AOL email address unless Bill Clinton is President), I'm cc'd on every single memo the Nigerian Oil Ministry has ever issued.  I also get invited to take part in surveys, and offer my opinion on new products and packaging, in exchange for points that I can later redeem from the Wizard of Oz for a brain.

Yesterday, "Red Dot Pre-Paid Visa Card for Teens," came calling, begging me to help them choose from one of several prospective logos, all of which looked like an adolescent skin condition or a communicable disease.  Since I wasn't really wowed by the graphics, I instead filled the comment box with suggestions for a more appropriate product name.  My top three were:

They're not all scams, of course; some of these communications do offer a more legitimate quid pro quo, such as discounts on items I would never buy.  This morning I was emailed a coupon for Axe Body Spray, and it struck me, not for the first time, what an odd name that is for a personal grooming product.  Is it supposed to be applied with an axe?  I mean, I get that they're trying to make the concept of "body spray" sound masculine, but frankly "axe" just makes me think about the "Lumberjack Song" and I think that's probably going off in a different direction than they intended.

Not that I'm so confident in my masculinity that I'm completely immune to the appeal of brawny nomenclature.  When Mary returned from CVS one day and presented me with a baby blue bath puff, I admit, I was a little put off by the name.

"Oh, just call it a shower scrub," she scoffed, but I realized that would fool no one.  So I named it "Scab Fleshreaper" until I could think of something butch.  It was apt, as things turned out, because a short time later Scab Fleshreaper ripped open a bug bite on my leg -- cause that's just the kind of hardcore asshole he was -- before eventually dying a warrior's death by sort of unraveling.

Mary then upped the ante by bestowing me with a hot pink replacement scrubby, which I dubbed Lady Bloodskin, the Exfoliatrix.

I should hasten to point out that I'm not at all insecure about body care and grooming, especially since I replaced the hot pink bath puff with 60-grit sandpaper.  Because it's not only manly, it cleans, invigorates, and traumatizes the skin, while doing a pretty good job of removing unwanted hair in the bikini area.

Speaking of the bikini area, don't forget to send us a screen shot of your custom, pimped out sanitary napkin.  Uglucks Flea was the first to take up the challenge, emailing us the following design.  What was his inspiration?  "Dolphins are really just frat boys of the sea." 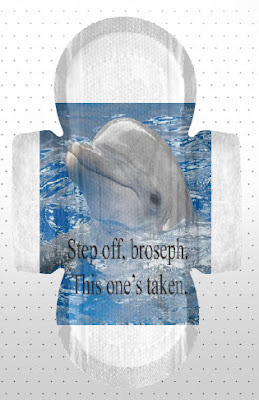 And since dolphins are trained assassins -- Flipper was basically just Jason Bourne with a catchier theme song -- you'd be wise to take the napkin's advice.

Next up is my entry, which I've entitled, "Thomas Kinkade, Painter of Light Days." 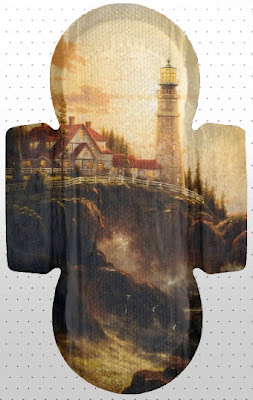 UPDATE:   Uglucks Flea brings up a good point in comments:  "I think yours might have an unwanted effect - while likely still warding off any sharks and/or curious cetaceans, it contains such gibbering horror that it would likely call Cthulhu to rise from the briny deep." 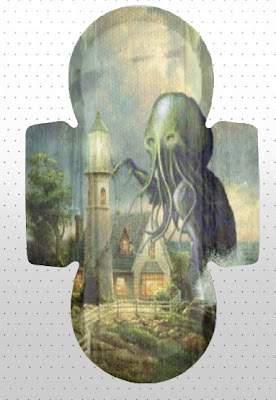 And here's a lovely entry from Chris Vosburg, entitled "The Abyss Screams" 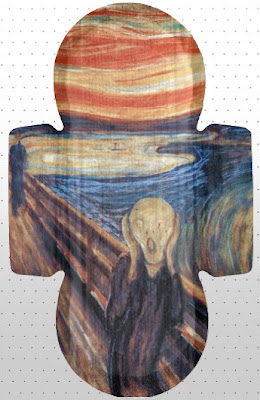 Next, Doc Logan weighs in two entries. Take it away, Doc!

"First, taking Mary's example of TOM = time of the month, heavy days would be Major TOMs." 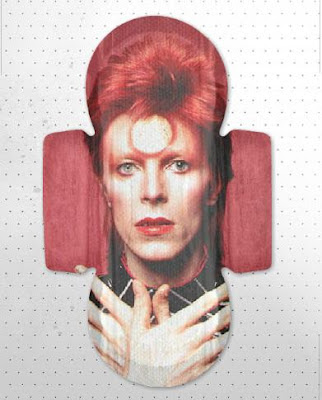 "Second, menstruation needn't be such a dreary experience. A picture of a beloved comedian should lighten everyone's spirits a bit. " 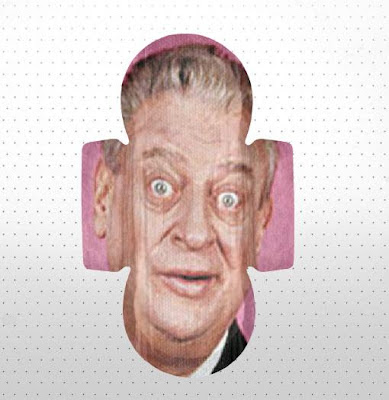 Email ThisBlogThis!Share to TwitterShare to FacebookShare to Pinterest
Labels: For No Good Reason, SpamSpamSpamSpam

Axe follows in the grand tradition of Hai Karate in encouraging domestic abuse by both acting out the name but also in actually using the product to make your date smell like the inside of a dockside gay bathhouse.

I think yours might have an unwanted effect - while likely still warding off any sharks and/or curious cetaceans, it contains such gibbering horror that it would likely call Cthulhu to rise from the briny deep.

Right now, I kinda think Chris is winning, as his design truly illustrates the horror that is "the period"; not just for women, but the men, children, and friends around them.

Right on, Mary, it's always been one of my arguments against a creator deity because, well, speaking as an engineer myself, it's just a really bad design.

Axe body spray is called Lynx down here. Which is quite a descriptive name, if you think about what a tom cat smells like.

So I named it "Scab Fleshreaper" until I could think of something butch.

Back when I was stupid enough to post to alt.religion.kibology, several members formed a band called Interrobang Cartel. People were pitching in with lyrics, writing songs, basically being creative, while I decided to be a little shit and write lyrics so horrible no one would record them.

Two different members of Interrobang Cartel recorded it, and recorded it well. They shamed me with their genuine enthusiasm and talent.

Bravely slagging (god what a trooper) his way through The Mad Monster, trying to turn poor Glenn Strange into a wolfman or something, and imagining an invincible army of Glenn Stranges, he falls into a reverie where he is confronted by his detractors who conveniently materialize at a table he's prepared for the occasion.

They, one after another, denounce him as they did to the university, or science council, or whatever, and he bats down their criticism with searing skill, until finally one of them backsasses "no, Cameron, you're a madman, and your ideas are ridiculous."

"SILENCE!" hollers Zucco, and that's where I fucking lose it: [laughing] he's lost an argument with voices in his head.

The materialized detractors conveniently dematerialize, so Zucco can get back to work, but I commemorate the moment by hollering "SILENCE!" whenever I am in a tight spot (say, being mugged) or losing an argument. Surprisingly effective.

Looking over the IMDB catalog, oh man, he was was much better than that.

It's not sadness, really, he obviously was one of those actors who liked to work and took anything he could get, but oh man.

One of the best Moriarty characters to play against Sherlock Holmes, by the way.

And a last rumination about menstruation:

There's a scene in Carrie... yeah you know the one I'm talking about.

Carrie first menstruates in the shower at the gym at school, and is horrified as her classmates laugh and laugh and laugh. See, her Momma never told her about it, and in fact considers it a sin.

Brian De Palma pulled no punches on this one, and he delivered it with the full thrust of the story King wrote.

Incidentally, though both Sissy Spacek and Piper Laurie were nomenies, the Oscar was taken that year by Fay Dunaway for her performance in "Network".

Pigskin Loofah?? How has this not become the O'Reilly Factor intro music?

Available anywhere on the internets?

Carrie first menstruates in the shower at the gym at school, and is horrified as her classmates laugh and laugh and laugh. See, her Momma never told her about it

I can relate. One morning, I woke up, went to use the bathroom and was surprised by the blood(a TLC show that never got picked up)!

I didn't panic. I just sorta sat there until my sister (the RN) came to the door, and asked if I was "bleeding" I said "yes" She told me to look into the cabinet on my left, so I did, and my first thought was, "Oh!! THAT'S what those are for!"