No, she's not dead, and it's not her birthday; I just felt moved to give a shout out to yet another workhorse of sixties-era TV. In Arline's case, whew, also fifties, seventies, eighties, etc. Still working, in fact.

Just saw a Perry ep (The Case of the Absent Artist) which featured a sultry and kittenish Arline Sax in one of her many, many TV roles. In this one she plays a beat chick, all black sweaters and jeans, in an artists' community somewhere on California's coast called "Port Harmony", who never ever smiles, but looks exotic and mysterious, not to mention hot, doing it. 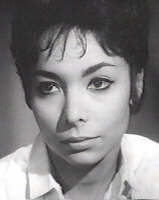 She definitely had it, that presence that all great actors have, that dominated whatever scene they happened to be in. Arline started out in the Bronx, and wound up graduating from the "famed" High School of the Perforning Arts, with the school's top drama award. Although she did a lot of theater at first, she soon ankled Broadway for Hollywood, and a long and prolific TV career, only doing a couple movies.

She did 'em all, everything from The Untouchables and Route 66 to The Wild Wild West and a recurring role in Hogan's Heroes (as sexy French Resistance fighter "Tiger"), and of course the Twilight Zone (pictured below: her nurse/stewardess-from-hell role in the TZ episode Twenty Two). 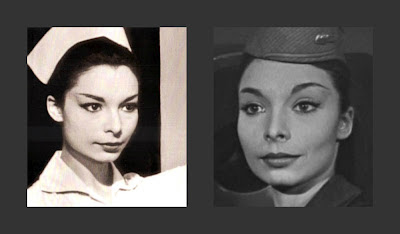 "Room for one more, honey."

There was something of Audrey Hepburn in her looks and she had a talent for dialect and the kind of dark, vaguely Mediterranean features that got her cast as a surprising variety of ethnicities: Native American, Italian, Spaniard, Latino, Greek, Russian, Vulcan... wait, what? 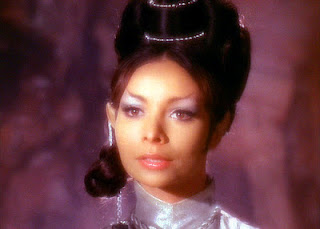 Yep, she was (and will forever be, I suspect, to her fans) T'Pring, Spock's betrothed in the ST:TOS episode Amok Time. I admit to having had a fair crush on her back then-- rowrr!

Scott adds:  She also achieved a measure of enduring Geek Cred as the working class damsel in my favorite episode of The Outer Limits, the Harlan Ellison-scripted Demon With a Glass Hand, in which Arlene played the unhappily married seamstress trapped -- by aliens!  From the FUTURE! -- in the Bradbury Building with an amnesiac and seemingly bionic Robert Culp. 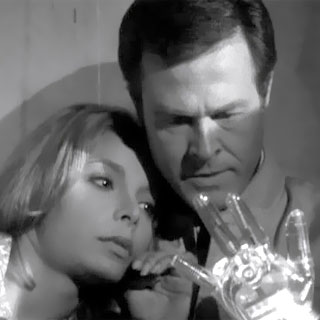 I always enjoyed it whenever she would pop up in a movie or TV show.  As Chris says, she had that indefinable presence that makes an actor the cynosure of any scene, no matter how silly the context or talented the co-star.
Posted by Scott at 2:05 PM

She looks a lot like Barbara Luna and I'm sure that I have mistaken Ms. Martel for Ms. Luna many times. Now I have to re-watch my entire classic TV collection to find out.

You probably wrote more words about her than she's had lines in movies and on TV.

So that makes you a Yakkity Sax...

She did (does?) have good screen presence, strange she never had a more prominent role somewhere to let her shine. I wonder if the reason she never had a big break-out role was the same reason she had little trouble finding work in the 50s, 60s, whatever - the whole amorphous "ethnicity" thing. If she were to come on the scene today, interesting to think if her career would have been able to play differently.

She's supposed to have had it goin' on with James Dean hot and heavy at some point, and perhaps his experiences scared her off the big screen.

But that's what I kept thinking, Flea, so I went charging off through the internet like Ted Nugent through the chaparral with his mighty hunting bow, and:

And I got nothin'.

I did, however, stumble across a couple of things that may help to inform the question.

First, her website (man, am I the only person on the planet that hasn't got one?). The highlight reel of her work is a hoot, with especially big laffs for her work with Major Nelson (I Dream of Jeanie), and the Monkees.

Second, an interview with the Star Trek fanboy Wiki, in which she reveals herself to be as articulate a spokesperson for feminsim as you could ask for. An example:

I’d played women with different accents and of different ethnicities, and this was a very cultured, sophisticated woman who insisted on specificity and got what she wanted, not because she was calculating and manipulative, but because she was smart. She knew what she wanted was not going to be provided to her by this seven-year mating call. So she took her future into her own hands. And I think she was one of the first really powerful feminists to emerge out of the sci-fi world and I was just utterly surprised that they didn’t bring her back. To just dispense with a character that was so iconic didn’t make any sense to me.

Also, William Shatner had her in stitches for most of the shoot.

Last, and this is just for fun, a Youtube mashup of her Twilight Zone work. I wonder if she brought her eyebrows from the nurse character to work on the Star Trek shoot. But there is nothing like her delivery of that line:

Room for one more, honey.

She looks like the famed bust of Nefertiti. Very cool.

Wow, she does at that. Nice catch, K.

My father was an eleven-year-old boy when Carter crashed into the Archaeological find of the century, and remembered it vividly, and described it, again vividly, to me-- the ensuing world tour of artifacts sparked an American burst in Egyptian-themed architecture, among other things.

Universal Studios went right to work, with "The Mummy".

Arline had a long relationship with Universal much later, so you could consider it a long delayed echo of sorts.

She more-or-less stars in The Glass Cage from 1964, which is a truly amazing movie that should have a massive cult following but doesn't.

You forgot to mention that Demon With a Glass Hand was one of the Ellison stories that James Cameron filtched from for Terminator,
which gives Arlene even more geek cred.

Lancelot: Thanks for pointing out The Glass Cage. I'd never heard of it, but that's a hell of a B-movie cast -- I'll have to try to track it down.