Director Zack Snyder and screenwriter David S. Goyer promised a "darker" look at America's archetypal superhero in Man of Steel, and I have to confess that as a lifelong comics fan I was thrilled by the notion of a Superman who could exist in a relevant and recognizable -- if not necessarily realistic -- version of the world we live in.  And if that vision meant accepting a Clark Kent who was not a mild mannered reporter for a great metropolitan newspaper, but a furry-faced bum from the reality TV show Deadliest Catch, and a Man of Tomorrow who doffs his iconic red underpants and goes commando, then so be it. What I wasn't prepared for, however, is an uncompromising Superman who collects gruesome trophies from his victims. 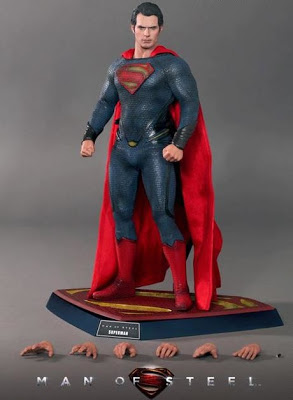 "Get the point, Lex?  Or do I have to start stringing a necklace out of dicks?"

There's precedent for this, of course; in The Dark Knight Returns, it's strongly implied that Oliver Queen, the Green Arrow, began killing white collar criminals who were beyond the reach of the law, prompting Superman to tear off the archer's shooting arm.  That may seem out of character for the Man of Steel, a hero with a well-known bias against killing, but Queen survived, so Superman merely maimed him, and no doubt even administered prompt first aid by cauterizing the gushing stump with his heat vision.  Plus, it just seems natural that if any DC character would turn out to be a corporate stooge, it'd be Supes, because he's spent the last 75 years proving that his powers and abilities to whore himself out are far beyond those of ordinary men. Still, I hate to think the worst of people -- especially people who can rip my hand off -- so perhaps there's a more benign explanation for this macabre phalanx.  For instance, the display of severed hands could simply be evidence of a new and exciting super power.  As any comic book fan can attest, Superman has a familiar and unvarying skill set, preternatural abilities that are stimulated by exposure to Earth's yellow sun, which include super-strength, heat vision, x-ray vision, flight, invulnerability, and sanctimony.  But he also possesses a series of impromptu, short-lived, and quickly forgotten super powers that are stimulated by lazy writing and looming deadlines, including super-ventriloquism, super-knitting, and the ever popular super-friction.  Most important of all, he occasionally, when the plot demands it, shows signs of super telepathy, which I believe he's using in the photo above to mentally command an army of Things from The Addams Family.

After all, Superman is a joiner (Justice League of America, Legion of Super-Heroes, League of Titans, etc.), and even though Man of Steel is a solo project, I suspect he got lonely and decided to form a team drawn from the traumatically amputated appendages of his foes, allies, and casual acquaintances -- a sort of dismembered Super-Friends.

So remember, if you wake up in an ice-filled bathtub and find a note from Superman explaining that he took your kidney, it doesn't necessarily mean he's an organ trafficker, it may just mean he wants you to be his Pal (and if you're lucky, Superman's previous Pal, Jimmy Olsen, might let you wear his Superman Signal Watch, because at least you've still got a wrist).

What do you guys think?
Posted by Scott at 6:16 PM

Scott, I've read reams about Supe the last couple weeks and this is the only thing that didn't make ma mad.

I think this picture proves just how BIG a dick Superman really is. I mean, come on! He's already got amazing super powers! Now he's got to own all the hands in the world?! That's pretty dickish, imo.

I would love to comment on what I presume is an excellent article, but I can't tear my eyes away from Superman's Fortress of Bonertude. I may need to have someone yank the battery out of my laptop.

My theory is that the statue comes with plug-in extra hands so that you could pose it without fists. Perhaps there's an upgrade of really big hands, which the true fans can use to pretend that they're getting a super-hand job.

So many punchlines, Carl, so little time... *sigh*