You may remember Alan Caruba, a former "PR counselor" for pesticide manufacturers and chemical company trade associations, and a waxy substance derived from the leaves of the Copernicia prunifera plant.  In addition to giving your car a weatherproof glossy shine, Alan likes to keep his hand in the bullshit business by writing for RenewAmerica, and is such a deft practitioner of unrighteous indignation that he's been interviewed on The Daily Show, and extensively quoted in Roy's latest Village Voice column.

So what's got this Pro-Am prevaricator's lips moving?  The likelihood that a Not Guilty verdict in the Zimmerman trial will result in government-sponsored rioting by Black people (the Obama White House will deny any such agitation, of course, but the connection will become obvious when looters are caught receiving their Presidential Physical Fitness awards for running the length of the Best Buy parking lot while carrying a hefty big screen TV).

As you can see, Alan's column is headed by a photo of Jamie Fox... 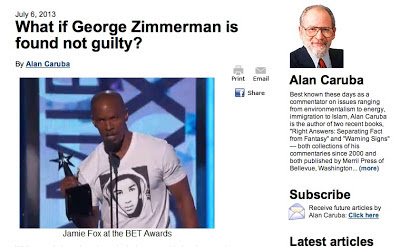 ...even though he's mentioned nowhere in the article.  I suspect Mr. Fox was included here because he is an Angry Black Man seen sporting a Trayvon T-shirt, and obviously enraged that his award looks like one of those gag trophies you buy in the Pro Shop of a public golf course.  There is, regrettably, no transcript of the BET event, but he appears to be inciting the crowd to "bring down the Man" by ordering a second glass of motherfucking iced tea, even though the Prix Fixe menu clearly states "No Refills."


White people have largely made their peace with the changes that were initiated with the Civil Rights Act that Lyndon B. Johnson signed in 1964 in the wake of the Kennedy assassination.

It was unfair of LBJ to sneak civil rights legislation through Congress while White Americans were so busy remembering where they were when they first heard that Kennedy had been shot that they briefly forgot to keep Jim Crow on a constant simmer, and you have to give them credit for letting bygones be bygones.


Race has always been a factor in American life dating back to the importation of the first slaves to the colony of Jamestown, Virginia in 1619. One of America's leading historians, Thomas Fleming recently had a new book published, "A Disease in the Public Mind: Why We Fought the Civil War,"

...the thesis of which seems to be that New England hurt the South's feelings, so it decided to have slaves.  From the Amazon product description:  "By the time John Brown hung from the gallows for his crimes at Harper’s Ferry, Northern abolitionists had made him a 'holy martyr' in their campaign against Southern slave owners. This Northern hatred for Southerners long predated their objections to slavery. They were convinced that New England, whose spokesmen had begun the American Revolution, should have been the leader of the new nation. Instead, they had been displaced by Southern 'slavocrats' like Thomas Jefferson. This malevolent envy exacerbated the South’s greatest fear: a race war. Jefferson’s cry, 'We are truly to be pitied,' summed up their dread."

In the years immediately preceding the war, the calls for the abolition of slavery increased at the same time white southerners had spent decades gripped with growing fears of being killed by the slaves who vastly outnumbered them.
[...]
I cite this bit of history because I keep hearing the question "If Zimmerman is acquitted of killing Trayvon Martin, will there be race riots?"

Granted, I'm not in Alan's social orbit, but I wonder just where he keeps hearing this question -- in his Iron John drum circle?   His neo-Confederate grief counseling group, perhaps at their Thursday night primal scream workshop?  Or is this query endlessly repeatedly inside his own skull -- not because he's obsessed or crazy, but simply because the acoustics are better in there.


Like the southerners of old, whites, Hispanics and others today are concerned about black violence.

In the interests of racial profiling, white southerners are allowing Hispanics into their coalition on a Day Pass (please remember to return your temporary I.D. badge to the Security Desk as you exit), sort of how Hitler declared the Japanese Honorary Aryans.


Taking 1964 as a starting point, there were seven race riots that year, three of them in my home state, with others in Philadelphia, Rochester, New York, and Chicago. The famed Watts riot occurred in 1965.

Taking 1964 as a starting point allows us to pare history down to a manageable size by eliminating those halcyon days when race riots, like the NBA, were primarily a white man's game.

What a weird coincidence!  You'd think if a Black exponent of non-violent resistance was brutally murdered by a White man at a time of great social tension, peace would suddenly break out like pimples on an 8th grader.


In 2011 I reviewed a book by Colin Flaherty, "'White Girl Bleed A Lot' – The Return of Race Riots to America." Flaherty stated that "Race riots are back...

...along with widespread racial crime and violence." He documented these episodes, noting in particular that "local media and public officials are silent...this denies the obvious: America is the most race conscious society in the world. Few know about it (the violence). Fewer still are talking about it."

Because if there's one thing Americans disdain, it's juicy crime stories.  This is undoubtedly why CourtTV focuses exclusively on parking violations in prime time, because moving violations are considered too sensational.


In October the sixth edition of his book will be published by WND Books. When I asked him whether the fear of racial riots after the verdict in the Zimmerman trial is rendered were justified, Flaherty replied that "I have not noticed anyone saying if Zimmerman is acquitted there will NOT be a riot."

"Sure, they haven't succeeded in not disproving my negative, but they also failed to not deny it!  And why haven't they not done it?  Nobody won't even refuse to ask."

On a more scholarly note, I haven't read Mr. Flaherty's book and I don't intend to, because Alex Pareene did it for me.

A visit to Flaherty's website confirms his observations regarding violent attacks.

While a visit to our website confirms my observations regarding Alan being an idiot.  Can't argue with the Self-Correcting Blogosphere.
Posted by Scott at 6:18 PM

Email ThisBlogThis!Share to TwitterShare to FacebookShare to Pinterest
Labels: Can I Peek Under Your Hood?, No Country For Old Men

"... Flaherty replied that 'I have not noticed anyone saying if Zimmerman is acquitted there will NOT be a riot.'

"Sure, they haven't succeeded in not disproving my negative, but they also failed to not deny it! And why haven't they not done it? Nobody won't even refuse to ask."

And even if they did, he wouldn't notice it.

Coincidentally, Scott, I was in a Barnes und Noble for the first time in goddessknowshowlong yesterday, and happened to pick up the very same "Disease in the Public Mind" volume, and read the same jacket blurb you quote from amazon. At that point I noticed the book smelled kind of funny, and put it down.

Now, I know she has some liberal cred from her days at MSNBC, but I tuned in yesterday, and listened to her practically cream her panties over the witness the defense introduced yesterday, some famous medical examiner (sadly, not Quincy)

I'm not convinced Zimms is going to be found guilty, since this is a Florida, a state so moronic a) it has its own tag on Fark.com and b) the people there elected Lex Luthor governor.

Wanna check that last link, Scott? I'm not sure you pasted what you wanted into that URL feed.

Thanks, thunder! Should be fixed now,