James Lewis ("a scientist by trade, [who] carps as a hobby about the passing parade of human fraud and folly") is back, this time using Science to prove that the President is one'a them deviated preverts. 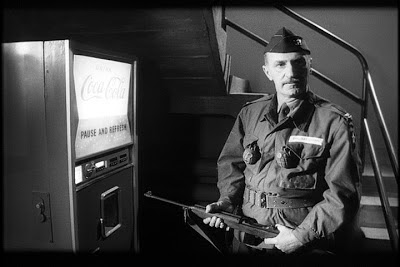 In economics, a "perverse effect" means getting what you don't want. If McDonald's makes an executive decision to sell lousy burgers

We call that a "business plan" or "mission statement."

and ends up bankrupt, that is a perverse decision. Markets are tough on companies that act perversely

Granted, it's tough love (the Markets will still have sex with a perverse company, but they'll donkeypunch it for coming up with the McDLT).

but the Amazonian jungle of government allows perverse incentives to flourish and spread.

But thanks to slash and burn agriculture, 1½ acres of perverse incentives are destroyed in the Amazon every second.

Chicago is basically a one-party regime.

At least, that's what Carl Sandburg called it, after "Hog Butcher for the World," "Stacker of Wheat," and "Fierce as a dog with tongue lapping for action," (which would have been the municipal motto, except it sounds really dirty in Latin).

How can you tell if you're living under one-party rule? Your media aren't going to tell you. Your government isn't either. Your schools are part of the mob monopoly.

I know that's how it was at my school.  Almost all the rowers on the Varsity sculling crew were made men.


But there are signs: the biggest one is that open scandals and crimes have no consequences. We all know Holder is a perverse attorney general, that the EPA is run by scientific know-nothings...that "green technology" contradicts the known facts of physics, and that "catastrophic climate change" is a self-serving farce.

In the past we've speculated on which scientific trade Mr. Lewis practices, and I think I've narrowed it down.  He either holds the Einstein-Rosen Bridgework Chair in Theoretical Dentistry, or perhaps he's a humble Torsion Field hand.


This presidency is practically defined by its perversity. When this administration gets caught with its pants down, it just becomes even more grandiose.

Well, you know what they say about the way those people are...gifted.  It's twue.


All the scandals the media decided to expose after the election have not changed any behavior.

Or turned out to be scandals.


Anybody with a computer can now read the weekly exposés of the much-admired British government's health system, with dirty, overcrowded hospital rooms; spreading antibiotic resistance; poor treatment for older people (who don't have enough QALYs left on their life tickets); and deliberately uncontrolled immigration to bring in cheap Labour voters. These are all in our future.

I admit, it's a pretty boring reboot of Westworld.


But Americans voted for Obama because he would relieve their white guilt forever.

It's twue, eight years of Bush-Cheney made it so uncool to be a middle aged white dude that even before the 2008 election I had taken to putting on a turban and passing myself off as Korla Pandit.


They chose not to know the consequences. When things fall apart, they will blame another scapegoat. Obama's perversity -- his endless big promises leading to terrible outcomes -- echoes the growing perversity of our culture. This is a very stubborn disease, and it may take decades to cure.

Note that this particular strain of perversity has already mutated from a hamburger to a rainforest to a disease, so please stop taking antibiotics every time you get sick, wouldja?  You're just adding to the ever growing list of methicillin-resistant metaphors.


The Jihad War is yet another example of perversity. There certainly is a danger of foreign attacks today, but this is not the first time: in 1812, the Redcoats burned the White House down.

Far be it from me to challenge of the facts of a Scientific Tradesman, but the White House burned down in 1814, so if the Redcoats lit the blaze in 1812, I can only conclude they used a really crappy accelerant.


The Soviets ran constant bomber and submarine probes against the U.S., just as we did to them. Previous U.S. responses to military threats have been proportionate.

For instance, when the U.S. was attacked by Saudis operating out of Afghanistan, we invaded Iraq.


But Obama authorized global violations of the privacy rights of billions of people all over the world. Under Obama, we have abused the greatest promises of web technology.


In this Brave New World, we still can't answer the ancient question -- can you trust a stranger with your private information? -- in the affirmative.

Ah, so something that's never been true is still not true. That's quite a perversityburger.
Posted by Scott at 1:05 AM

But the violent hard core is easily analyzed on your home computer. It's not hard.

Looks like James has admitted his perversity AND his problem.

Still not understanding the logic swirling inside the brain of a man who has probably never met anyone suffering from "white guilt", yet thinks there are so many white guiltivores in the US that they elected Obama to soothe their tormented souls.

James is pretty prolific. Wonder when he has time for sciencin'? Hell, I can also ignore data and logic and write poorly. I must be some kind of scientist.

My favorite wingnut complaint is "He only won because he's black!" Just like the 43 previous black presidents, I guess.

I'm just glad he's slowly pulling us out of the Keyes recession. Makes me sad to think how he squandered the good economy Jesse Jackson left him.

Well. Anyway, Scott, I see by your Pandit Korla link that one missed quite a bit by not growing up in 50s L.A. Why, at that point I had to be content with Crusader Rabbit.

Who knows when the next kid with a thumbdrive will download their Swiss bank accounts for all the world to see?