I'm beginning to suspect that most right-wing bloggers were Boy Scouts in their youth (back, I'm sure they'd hasten to interject, before the BSA went all gay).  Not because I can picture any one of them hiking through the wilderness, belting out "The Happy Wanderer," but rather because, when it comes to public tragedies that might be turned to personal advantage, they invariably practice the motto, "Be Prepared."

Yesterday we saw where Alan "Brazil Wax" Caruba proved, through geometric logic, that a Not Guilty verdict in the Zimmerman trial will result in Blacks going on a genocidal rampage against Whites.  Today, we find Roger L. Simon's Feetie Media and frozen TV dinner heir Tucker Carlson's DailyCaller... 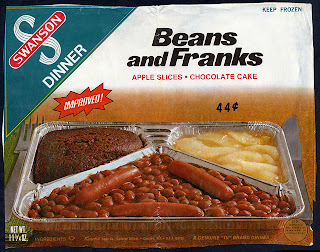 (Motto: "We Are To News As This Shit Is To Cuisine")

...hedging their bets with a hot new angle.  Judicial Watch has (reportedly) gotten ahold of some (allegedly) damning documents which (ostensibly) show that the Justice Department sent two officers from its Community Relations Service (or, as JW calls them, "secret 'peacekeepers'") down to Sanford, Flordia just as tensions were coming to a boil.  The two-person team apparently worked with city government, activist groups, and local police to mediate disputes and prevent protests from turning violent.  Or, as Simon's Dr. Denton Daily puts it, Newly Released Documents Detail the Department of Justice’s Role in Organizing Trayvon Martin Protests, while Tucker's frozen shit on a shingle goes with the more demure Docs: Justice Department facilitated anti-Zimmerman protests.

So it looks like the right bloggers have it covered.  If Zimmerman is acquitted, then he deserved to go free because he was the victim not the perpetrator, but Black people will take out their rage against White people anyway, making us all victims (or Spartacus).  If Zimmerman is convicted, it's only because the DOJ sent undercover agents provocateur to gin up protests and pressure police to arrest an innocent White man for the crime of standing his ground against a racist Black man armed with Skittles.  No matter what the outcome, they're the victims.  It's two persecutions in one, the Certs of self-pity.

John Hinderaker at Powerline asks, DID THE DEPARTMENT OF JUSTICE STIR UP TRAYVON MARTIN RIOTS?, while Instapundit Glenn Reynolds is so incensed he can't even manage to croak out a token "heh" or "indeed":

RACIAL HATEMONGERING ON THE TAXPAYER’S DIME: Newly Released Documents Detail the Department of Justice’s Role in Organizing Trayvon Martin Protests. “Judicial Watch announced today that it has obtained documents proving that the Department of Justice played a major behind-the-scenes role in organizing protests against George Zimmerman. Zimmerman is on trial for second-degree murder in the shooting death of Trayvon Martin in February 2012.”

So not only did we have a public statement by the President that might have tainted the jury pool, but now we find the Department of Justice was involved in, basically, organizing a lynch mob?

Yikes.  So what did these DOJ agit-prop specialists do down in Sanford, aside from cultivating an orchard full of strange fruit?  I guess we should first take a peek at the Community Relations Service mission statement to see what they were supposed to be doing:


The Community Relations Service is the Department's "peacemaker" for community conflicts and tensions arising from differences of race, color, and national origin. Created by the Civil Rights Act of 1964, CRS is the only Federal agency dedicated to assist State and local units of government, private and public organizations, and community groups with preventing and resolving racial and ethnic tensions, incidents, and civil disorders, and in restoring racial stability and harmony.

Emphasis added. Okay, Judicial Watch, what were they really up to?


Though CRS purports to spot and quell racial tensions nationwide before they arise, the documents obtained by Judicial Watch show the group actively worked to foment unrest, spending thousands of taxpayer dollars on travel and hotel rooms to train protestors throughout Florida.

Not that I don't take your word for it, JW, but I'd like to see that expense account line item for "fomenting unrest."


The peacekeepers also met with officials of the Republican National Convention, scheduled for several months later in Tampa, to warn them to expect protests in connection with Martin’s death.

Granted, it would have been more entertaining if the protests had caught GOP conventioneers completely by surprise, and probably made for much a funnier YouTube video.

Well, given that there were pro-Zimmerman, NRA-assisted counter demonstrators present, and passions were running hot on both sides, having the advice of a disinterested third party with experience in peacefully managing public demonstrations might actually have been beneficial.

Crap, we're $87.16 in the red.  I hope one of those guys had a Triple A or AARP discount card.
So they were training the protestors how to manage the police, and the police how to manage the protestors.  It's almost like the Justice Department wanted all the YouTube videos to turn out crappy and boring.
Wait -- this time the CRS team was in town for ten days, but they spent over than a hundred dollars less than the first trip?  Either they were getting mad frequent flyer miles, or they'd made friends and were crashing on the local lynch mob's couch.

In response to a Florida Sunshine Law request to the City of Sanford, Judicial Watch also obtained an audio recording of a “community meeting” held at Second Shiloh Missionary Baptist Church in Sanford on April 19, 2012. The meeting, which opens with a gospel hymn and organ music...

Admittedly, those aren't sounds we associate with Black people preparing to riot, although they do often precede White people bombing a church.

Local government officials noticed the Department of Justice’s efforts in building “bridges of understanding” in Sanford.

“Congratulations to our partners, Thomas Battles, Regional Director, and Mildred De Robles, Miami-Dade Coordinator and their co-workers at the U.S. Department of Justice Community Relations Service for their outstanding and ongoing efforts to reduce tensions and build bridges of understanding and respect in Sanford, Florida,” wrote Amy Carswell, Miami-Dade County Community Relations Board Program Officer, in an April 16 email.

Emphasis added.  Well, that sure makes it sound like the CRS had come down south to stir up trouble.  And folks down in those parts know how to handle Yankee agitators...unfortunately, the DOJ bought up all the good lynchin' rope (see line item #12: 50-ft. of Manilla cordage, $31.84).

Hey, I just realized...if Zimmerman is acquitted, and the predicted unrest doesn't occur, then right-bloggers can justifiably claim the credit.  Now that they've unmasked the DOJ's secret teams of peacekeeping riot-inciters, Eric Holder wouldn't dare issue the "go-code" (thanks to Judicial Watch, we now know that potential rioters were instructed to watch Obama's post-verdict press conference and start burning down their own neighborhoods the instant the President began to "talk" the lyrics to "Disco Inferno").  Finally -- after "Fast and Furious" and Benghazi, and the IRS scandals all fizzled out -- the perfect expose.  Hope none of you guys bet the over on Impeachment.
Posted by Scott at 6:45 PM

Organ music and hymns in a Baptist church. The mind boggles.

I actually don't recall any riots. I recall some extremely justified outrage that a guy who admitted killing a kid didn't even get arrested, because obvious self defense or not, and this one looks questionable at best, my bare minimum involving dead bodies is for cops on the scene to not just take the guy at his word. We used to call that kind of rallying for redress of grievances ("A kid is dead, can we at least find out what actually happened before we call it a day?") The First Amendment. It's not like they were even open-carrying or anything. Although that does seem to be demonstration dress code these days.

Hey, look, I'm still alive and stuff. Happy extremely belated birthdays and anniversaries and anything else I missed. I pretty much suck, yes.

You pretty much don't (IMHO), D. Very happy about the aliveness and the stuff. And welcome home -- we've always got a candle in the window for you (granted, our drapes and Tuscan Rod Pocket Valence keep going up in flames, but it's worth it).

Because there is no carnage worse that Hoverounds playing bumper cars...

Wait. Maybe the bigots knew there would be protests by white supremacists and that the government mediation prevented them.

What did Roger Hell know and when did he know it????

GAH! I can't take it anymore.

It wouldn't surprise me if the conservatives, who are obviously panting for a race riot, are correct in that the gov, too, would welcome the distraction and drama of such an event. So far as causing it to happen, good luck FBI that can only catch "terrorists" they create themselves. I can visualize a lot of black FBI Agents running around arresting each other.

Good to see you, D. Missed your take on things, sister,
Suezboo

The great D. Sidhe is here! Welcome and bienvenue, girl.

As to that post -- jeezcrispniss, the foolishness just about did in what remains of my brain after an afternoon trying to track down a usable online source for proofreader's methodology, American style. Exciting, you speculate? Well...... in its way, if tension headaches are your preferred stimulant. But when I imagined the gnomes at Judicial Watch straining after those repellent little gnats of "scandal", hunched over their 'boards and sweating lightly into their golf polos, I had to give up.