Anyone who's read our friend Weird Dave's comments over the years would have to agree that he has a rather droll sense of the absurd. So when it came time to go gift shopping for his birthday, I had to look no further than the work of Townhall "Tipsheet" blogger Cortney O'Brien, who saw the recent Sharknado sequel, not through 3-D glasses or even just a glass darkly, but through Kulturkampf! Brand X-Ray Spex (cuz she's a Kulturkampf BAMF!), and determined that beneath its urbane veneer, it's actually a feeding frenzy of pro-Second Amendment advocacy. 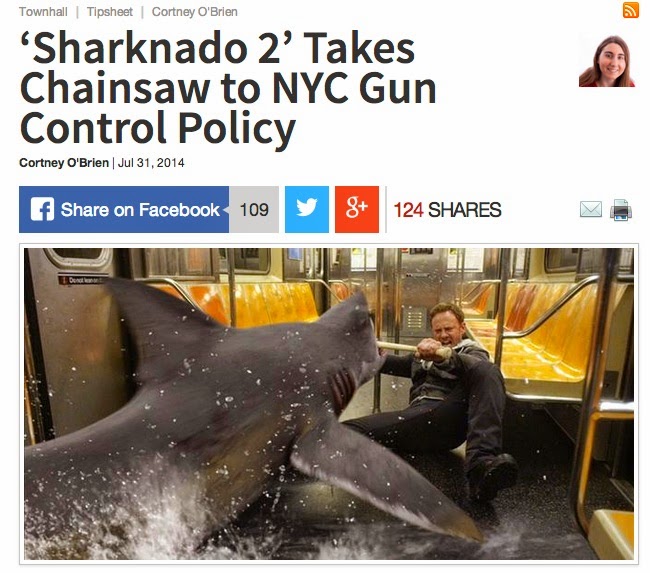 "Ain't that just like a New Yorker? Brings a bat to a sharkfight."

Now, the results of her deep textural analysis may surprise some viewers, and perhaps even a few of the filmmakers -- particularly the sharks, who deny any political motivation for their involvement in the project, claiming the producers assured them the movie was just going to be a light, fun piece of super-bloody snuff porn -- because a cascade of homicidal cartilage seems like a curious basis for the argument that open carry laws to lead to less crime.  Typically, when confronted by a shark, you can't stand your ground; the best you can do is tread your water.  However, if a Great White travels by twister into your neighborhood, and the cops don't pull it over for Flying While Shark, then you're totally entitled to gun it down. Unless you live in New York...


I never thought I’d praise the filmmakers who brought us ‘Sharknado.’ But, according to the Twitterverse, ‘Sharknado 2: The Second One,’ which premiered Wednesday night on Syfy, took a much-needed jab at New York City’s anti-gun agenda.

As Birth of a Nation was to the Klan, so Sharknado 2: The Second One is to the NRA.  Anyway, I'm old fashioned, and prefer that a critic actually watch a movie before she begins to laboriously tease out its subtle themes like so many threads from a Persian carpet, but obviously Cortney was on Twitter, saw gun enthusiasts making their usual pre-verbal vocalizations and thought, "There's a free column!" Which, to be fair, is pretty much what I thought when I saw her post, because it's the Circle of Blog. And frankly, I'm in no position to make an informed counter-argument, since everything I know about the film I learned from Sheri's tweet on the subject: To protect themselves from the sharks falling from the sky, the film's protagonists needed weapons.


But, a character begrudgingly informed them, there were no gun shops in the city. Yes, you do have to step gingerly over a few ridiculous potholes in the plot to reach the film's meaty and not at all ridiculous philosophical center, and like Cortney I find this a bit sad.  One of the most important sociopolitical issues of the day -- the right of American citizens to shoot it out in the street with sharks -- is finally dramatized, and Hollywood doesn't treat it with the gravitas it deserves.

Still, awareness has been raised, and the issue is in the Zeitgeist now, rotating at speeds up to 318 mph and sucking up attention and cows, so I say, when life gives you Sharknado, you make Sharknade.

I don't mean to question Mr. Johanson's martial acumen -- he speaks with great authority, and I'm sure he's war-gamed out various scenarios involving an attack on an urban environment by fish (Scenario No 2A: Airborne Sharks Take Manhattan. Result: High Collateral Damage due to a decrease in pawn shop firearms sales; Scenario 8H: Volga River Sturgeons Parasail into Palm Beach in Red Dawn-style Sneak Attack: Result: Invaders gut Rush Limbaugh and harvest his roe; Scenario 4J: Stealth Insertion of Helium-Filled Puffer Fish into Boston. Result: Attacking force casualties are minimal, assuming the local PBS station can be captured in the first 30 minutes of fighting) -- but if tough local gun laws are the key to victory by the Shark-Stormfront axis, wouldn't Washington D.C. make an even more perfect target? I mean, it's like these sharks aren't even bothering to think strategically. On the other hand, there are a lot of no-fly zones in the capital, and while sharks are unafraid to kill and disembowel indiscriminately, even they don't want the FAA up in their shit.


It’s not just these fictional characters upset with the Empire State's anti-gun policies. Actual New Yorkers have taken to the streets to give these politicians apiece of their mind. Their message? “Hands off our guns”.

True, they're a small minority of New Yorkers, but if you add in their fictional allies, then it's almost a plurality.


Good to see Hollywood joining these freedom-loving New Yorkers and not being afraid to slam policies that aren’t working.

Well, they had to do something to make up for their failure to grant equal time to both sides of the fracking controversy in Arachnoquake.

I can only presume these people will be shooting out their TV screens like Elvis during Shark Week.

Have a good one, W.D. AND WATCH OUT FOR FLYING SHARKS, OKAY?
~

Oh man, glad I didn't show up late for W.D.'s day (And a Friday too! Hope you're sober by Mon. Mine's a few Fridays hence; I'll be sleeping all that wknd.) I'd be remiss as hell not to honor the iNternet's (certainly WEB OF EVIL's) premier commenter. (Thundra's been slacking/busy lately.)

I lift my glass toward the Arid Zone (Stay cool!) & wish him many happy & many more.

But, a character begrudgingly informed them, there were no gun shops in the city.

The point kind of is the plot: If every bodega in Manhattan sells RPGs, you have a 15-min. movie. Plenty of explosions & shark guts, sure, but ... ah hell, we can can fill the other hr. w/ shots of Tara Reid's "botched boob job" or so-bad-it's-good dialogue/acting or something ...

As if any of the almost four million ninnies who watched the first showing on actual telebision got the "point" that gun regulation is bad BECAUSE SHARKS MAY FALL FROM TEH SKY AT ANY MINUTE1!11!

Happy birthday, Dave! I hope it is a pleasant one. And congrats on getting an "I'm the NRA, and I vote for New Yorkers getting eaten by sharks because they outlawed assault rifles" movie as a gift. Usually Scott just springs for something from the "birthday reptiles" section at gas station.

And Scott, I'm glad to know what the theme of this movie was, because I needed to know for my American Lit class.

Happy Birthday, Weird Dave! May the next year bring you much weirdness -- of the good kind.

...he has a rather droll sense of the absurd.
Is that a polite way of saying I'm weird*?

You know, I've never really thought of myself as a prehistoric 2000lbs killing machine dropping from the sky. The idea intrigues me.

I will say if faced with such an adversary and my choice of weapon was either a machine gun or a chain saw I'm going with the chain saw. I am sooo gonna cut you up and make soup outta you...

Oh, and there are no gun shops in New York City? It's getting so you just can't trust fictional cab drivers Mr. Friedman.

And, and if those twitches are the best they've got we have nothing to worry about.

OK, all kidding aside I want to say how much all of you crazy people and all of you people smarter than me (which can be the same people) help me make it through this World O' Crap.
Thanks so much. Here's to all of you.

Happy Birthday, Weird Dave, and many more of whatever floats your goat.

Well, as much as I hate to burst Ms. Courtney O'Brien's NRA bubble, she should have actually WATCHED the movie. If she had, she would have seen how an Air Marshal tossed the victim of bad plastic surgery herself, Tara Reid, a GUN, only to find herself disarmed (literally) by a shark tossed by the tornado.
Yes. Instead of a "good" girl with a gun, we ended up with a "bad" shark with a gun in his alimentary canal.
So, GOOD one, Courtney.

So the only thing that stops a bad shark with a gun is...lots of fiber?

Well, W. Dave, I don't exactly know what getting wind-borne sharks and flailing gun nuts instead of vintage pinups and sexy lizards says about your standing in the universe o'crap, but it has to be something interesting! Loads of happy returns, you're smart, weird, and a laugh!

Lil : He's Weird ! He's Dave ! He's one year older !
Many happy-happies to The Other Dave (The Weird One)and have a great year- anticipating many good funnies.
Suezboo

Hope you really bite into your birthday fun!

Srsly, that's I got; sorry.

1. "Cortney"??? Holy bat-fuck, that's a shitload of batshit crazy, looking-for-a-gun-analogy-in-EVERYFUCKINGTHING, should never be allowed around sharp objects OR children kinda snatch-on-a-stick who I *HOPE* was STERILIZED AT BIRTH. How you dig through these neverending Niagara-Falls-sized torrents of idiocy & bullshit, Scott, I still cannot comprehend. You must drink a SHITLOAD of mountain dew laced with pure morphine. If so, cut a bitch in.

2. Heydave, you still owe me an answer to the "WHAT DO YOU WANT FOR YOUR BIRFDAY?!?!!" happy-birfday e-mail, suckah... but I hope that your natal anniversary was joyous, ribald, and filled with mutual nudity. And hopefully some sparklers, but not near the nudity. Happy-happy joy-joy, son!

And back to the Dave of Note in this post (be patient, I'm dain-bramaged, as if y'all didn't know!), I am pretty damned sure that I sent Weird Dave the same "WHATTAYA WANT FOR YER BIRFDAY?!?!" pre-natal-anniversary e-mail.

So if you're wondering why your prezzie didn't arrive, Weird Dave, check yer spam/junk-mail folders. So nyeh. But the same & more wishes for YOUR birfday --- food, fun, nudity, music, joy, trampolines (with or without Tara Reid --- I wouldn't fuck that with a STOLEN DICK! But with her on it, it's a TRAMPoline-SQUARED!), and non-squatter-wannabe gypsy acrobats in fluttery costumes. If THAT don't get you a helluva birfday, I don't know what else would, short of you hitting the Powerball! (And of course, it'd be nice if you'd cut ol' Aunty Annti in for a tiny slice...)