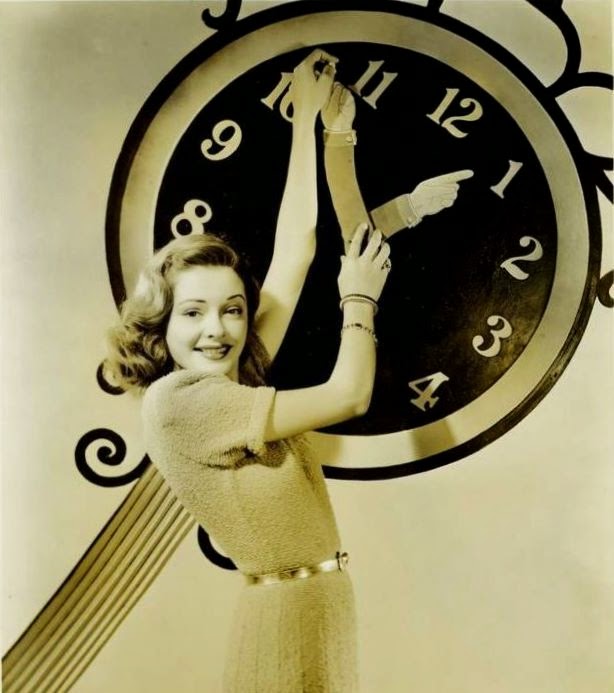 Jane Greer wishes everyone a very Happy New Year, and wants to assure you that she has no plans whatsoever to playfully blow on your coals and heat your pants up to the temperature of a pizza oven, then play you for a sap. Nor is she even thinking of drawing you into an elaborate scheme to double cross her gangster lover, only to set you up as the fall guy while she slips across the Mexican border with a fortune in stolen bearer bonds. And absolutely under no circumstances does she intend to remove the hour hand from this clock, slip soundlessly into your shabby furnished room as you toss your meager belongings into a suitcase and prepare to blow town, leaving the little two-timing snake behind, and stab you in the back, then replace the hand and let it tick innocently away as the baffled cops search for a murder weapon, even though that would be the perfect crime and therefore something even you, the hapless victim, would have to admit is a pretty swell way to start the New Year.

As for us? Well, even without the satisfaction of a police-baffling murder-by-clock-hand that we would totally get away with, unless we were thwarted at the eleventh hour by a Nero Wolf, or a Miss Marple, or a Philo Vance, the new year is starting off better than the old one ended. And that's kind of a big deal around here, because as you probably saw from this post, the last half of 2014 turned wildly turbulent for us, before abruptly giving up and just corkscrewing into a cornfield.

But it's January 1, 2015, and surprisingly, we're still here. The rent is paid for the month, the internet is still connected, we haven't been forced to place our stuff in storage and seek refuge on a friend's couch, or try to find a home -- temporary or otherwise -- for Moondoggie, and that is due entirely to the generosity and kindness of the Crappertariat.  We were in a desperate situation, facing certain homelessness, and you guys came to our rescue -- both active commenters whose names would be familiar to any Wo'C reader, and secretive lurkers who surfaced only long enough to launch a donation, then slipped silently beneath the waves again.

I can't tell you how grateful we are; not only for the financial help, but also for the touching notes we received -- a humbling and welcome reminder (for those times when I start to get a little cynical from too many trips to Townhall or WorldNetDaily) that the people who read this blog are so much nicer, smarter, and more empathetic than the people we write about.  And on that subject, I'd also like to thank our Special Correspondents who've lent their talents to keep this place hopping: Bill S., Keith, Hank, and especially Our Hostess (as Doghouse Riley often called her), Sheri, the inimitable S.Z., whose return to posting here is the best thing that's happened to World O' Crap since Jeff Gannon.

Here's hoping 2015 is a better year for all.  And while I'm no Chuck Workman, I'd like to end 2014 with our own Oscars-style In Memoriam reel, so here are Riley and Moondoggie in their one foray into feature films: A Cat's Guide to Grooming:

Happy New Year, everyone.
Posted by Scott at 5:42 PM

Email ThisBlogThis!Share to TwitterShare to FacebookShare to Pinterest
Labels: Happy Holidays, State of the Blog

It may be a cold, uncaring world out there, where you face grifters, hoodlums, and unceasing demands to prove you're not a robot, but this is a safe place. Happy my meager contribution helped (would have been more, but there's many wolves loitering around my door, and no matter how many times I shout "HEY GRANDMA!" they persist). Here's to a better 2015 for us all.

Here is to a much better upcoming journey around the Sun.

Here's to a much better year for everyone!

Riley, thank you for showing us how to totally grok a pair of underpants.

I do hope better for all of us this year.
~

I can just hear Riley, as Ren Höek: "I love it! It's so wonderfully stiiiinky!!!"

Our kinky kitty likes to lick the bottom of the bathtub, right after we shower. Cats is weird.

Anyway, it's been a privilege and pleasure, Scott. You can be certain I wear my Cub Crapper badge with pride.

If Zuzu starts talking about ringing bells and angels, I'm going to puke.