I've got some good news and some bad news. First the good: today is the natal anniversary of longtime lurker and Friend O' the Blog, Jacquie.  Last December, after an admittedly tough year, she requested an Eliza Dushku photo for her birthday cheesecake, which we were happy to provide. She hasn't updated her preference for 2014, so we're hoping this year was an improvement, or maybe she's just extremely loyal to her brand of eye candy; in any case, we're going with the same deal this year: 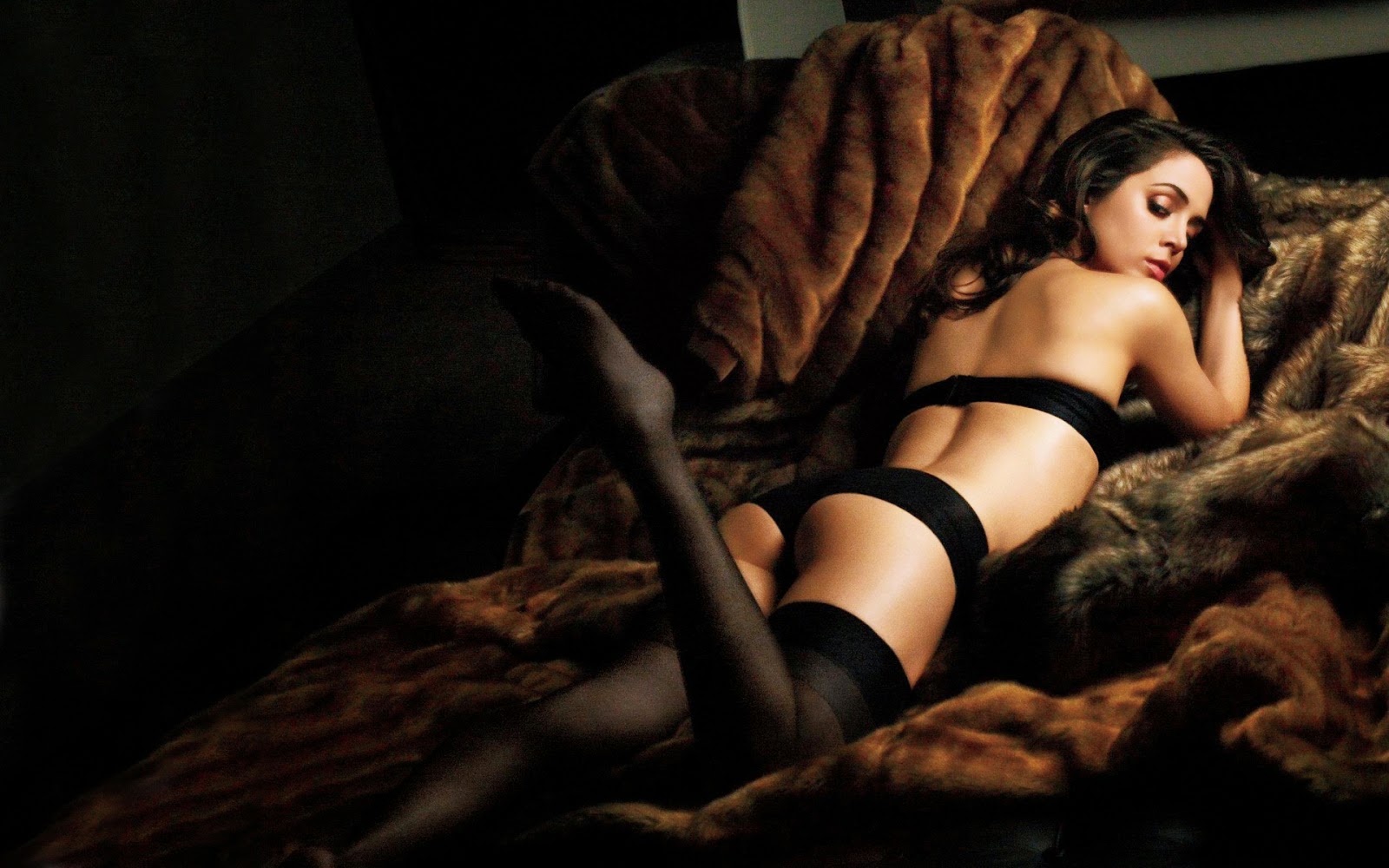 But what's a birthday party without a party clown? Unfortunately -- and here's where the bad news comes in -- I didn't plan ahead, and all the major names in the business -- Koko, from the Out of the Inkwell shorts; Bobo from those psychological experiments of the early Sixties in which children were manipulated into beating up Shmoos; and, of course, Pennywise from It -- were booked. Sadly, all we could get was Logos, the Logical Positivism Clown.

But maybe that's all for the best, because even when we're eating birthday cake, ogling cheesecake, and opening presents, serious stuff is still going on. For instance, racism has become a crippling problem in this country -- and by "country," I mean "remakes of animated movies" -- and our only hope is to call in a semi-professional philosopher and part-time party clown to straighten things out.  Fortunately, Logos is played by Jeremy Egerer of American Thinker, and Jeremy, according to his bio, "is the editor of the philosophical websites Letters to Hannah and American Clarity. American Clarity welcomes friend requests on Facebook."  Letters to Hannah, on the other hand, would prefer you just send letters, even though it's a website and can't actually receive or open mail, but anything else would leave them vulnerable to charges of false advertising. Letters to Hannah regrets the inconvenience, and admits it didn't really think this whole thing through.


King Louie: The Greatest Racist of Them All?

I dunno, which King Louie are we talking about? There were like 18 of them...


One thing that's come into fashion lately has been people's tendency to mock Disney characters for being "racist."

Jeremy definitely has his finger on the pulse of today's Hot Topic shopper, and if there's anything she loves more than leather bucket bags and gunmetal ear cuffs, it's lampooning the racism of Disney characters.

As we all know, Peter Pan was basically a documentary, and Disney animators consulted ethnographers and anthropologists, who assured them that Native Americans were in the habit of breaking into elaborate musical numbers to explain why their skin was red (they were cursed with a hereditary blush after one of their ancestors sexually harassed a pre-Colombian woman).

Now, I freely admit that I never majored in Philosophy, and therefore am wholly unequipped to deal with the brutal and naked Logic of the following paragraph, which I suspect would leave even Bertrand Russell in a cleft stick. But maybe you'll have better luck with it:


Apparently nobody has ever ridden the Washington State ferry system and seen old pictures of actual Indians. It's almost enough to make you wonder what Millennials think when they go to an Americanized Chinese restaurant. Is it more racist to call Chinese what they aren't actually, or more racist to call them what they are? Or is it racist to pretend that Chinese people have certain kinds of food at all? Maybe someday we'll live in a world where all the different races act completely the same way, so that everyone can pretend be more diverse without any stereotypes. But I don't see how this could help us find good food.

So, taking a ferry in Washington State will make you believe in Peter Pan, and therefore, peanut butter, while ordering from a Chinese restaurant will turn you into a racist unless you pretend you're at Cracker Barrel, but it's easy to slip up and give the whole game away by carelessly requesting extra duck sauce.


Maybe if we were more sensible, we would realize that it is the stereotypes themselves that make racial diversity actually diverse.

If it weren't for the clarifying power of watermelon-based humor, we might never even notice that black people exist, and instead go through life thinking all of humanity was kind of a stonewashed taupe.

A quick glance at European history might seem to contradict you, Jeremy, but why trouble your beautiful mind with white peoples' unpleasant penchant for making war on each other.


We would have already been the same.

It takes a philosopher to realize that the actual goal of "diversity" is "sameness."


The king of all anti-racist Disney complaints, though, concerns a king himself – a king named Louie, to be exact. Louie is a monkey, which is fine in and of itself; the fact that he's taken as a devious black monkey is the point of contention.

tl;dr - There was a touch of racism in Kipling's story, which was obvious even in 1967, so maybe a live action version made for a global audience in 2014 ought to filter some of that out. Also, "King Louie" was a character invented by Disney and shoehorned into the narrative, because say what you want about Kipling, he at least knew orangutans aren't native to India.


The fact that he's voiced by a white jazz musician is maybe the most interesting thing about the complaint.

And the fact that underneath the burnt cork is a white actor is probably the most interesting thing about blackface.


Had monkey never been a racial slur in the first place, and jazz musicians not been historically black, perhaps nobody would have noticed.

Exactly! And if bigots had never uttered the N-word, then you could use it today and no one would even know you were a racist! The joke would totally be on them! (I have to admit, this critique of pure reason is a lot more exhilarating than I expected.)


That everyone believes that the monkey was black, when he's being played by a white man who spent a lifetime aping the black men of his day, makes the accusation extremely ironic.

I think most people, particularly in 1967, knew that Louis Prima was Sicilian, but speaking of irony, I'd say Jeremy deserves full marks for attempting to disprove the existence of racism through use of the words "aping the black men."


If we really believe that imitation is the sincerest form of flattery, then King Louie's existence is less of an insult and more of a compliment.


However ugly the beginning of last century was, if there's any badge that doesn't fit the English these days, it's the imperialist. Yet it's the badge he was given in The Jungle Book, and the badge that everyone refuses to notice.

I can't speak for the UK but that's not really a problem in this country, since if you fail to notice a badge you'll probably be shot two seconds later, so the genetic trait of badge-blindness tends not to get passed on to subsequent generations.

The American Thinker has outgrown his diapers, which was the symbol of his incontinence, and is now ready for pull-ups. Also another box of crayons so he can finish his monograph, On Overcoming Racist Archetypes By Upgrading Your Camping Gear and Hat Collection.

"If he pulls an ad populum, you pull an ad hominem! If he sends one of yours an ideological upbringing, you send one of his a tautology! That's the Chicago School way!"

Anyway, white men have been polite long enough, and their philosophical brain trust has decided that the hill they should die on is the question of whether the live action remake of a 47 year old Disney cartoon will or will not include a jazzy orangutan.


[W]e should learn from this the incredible patience of all white men in general, who've been not only willing to admit to the sins that only their grandparents committed, but have been willing to turn the other cheek when those accusations are misdirected toward those currently living. It speaks of a certain magnanimity of heart, an innocence and softness in a world where everyone else is angry (for good reasons or bad).

Speaking as a white man, I'd just like to say how happy and relieved I am that my naiveté and downy softness is finally getting the respect it deserves.


It's the kind of thing that – believe it or not – keeps black racists in business, and instead of throwing a fit and suing when it's unfairly portrayed, asks, How should I then behave? The common Englishman is willing to call everyone innocent except himself.

To be fair, in addition to "innocent" he might also call you "twat," but that rarely, and only when he's drunk and trying to stomp your head in at a football match, because he's hard on himself that way.


When the rest of the world is passionately arguing against the white stereotypes entirely unfounded and outdated, and allows white men to make the same racial observations everyone else does for business and pleasure, then we'll have reached a state of racial harmony. For magnanimity of heart, if any relationship is to last, must be multilateral: there is no friendship without a common generosity. Voltaire said that you always know your masters when you find you can't criticize them. When two men can take a jab for the quirks and sins of their families, then we'll be dealing not with "minorities" and the "privileged," but with social equals.

A box of Twizzlers to the first person who can explain to me what the hell this guy is talking about.

So, here's hoping Jacquie has a very happy birthday, full of attractive actresses and a minimum amount of unfounded and outdated white stereotypes. Also: 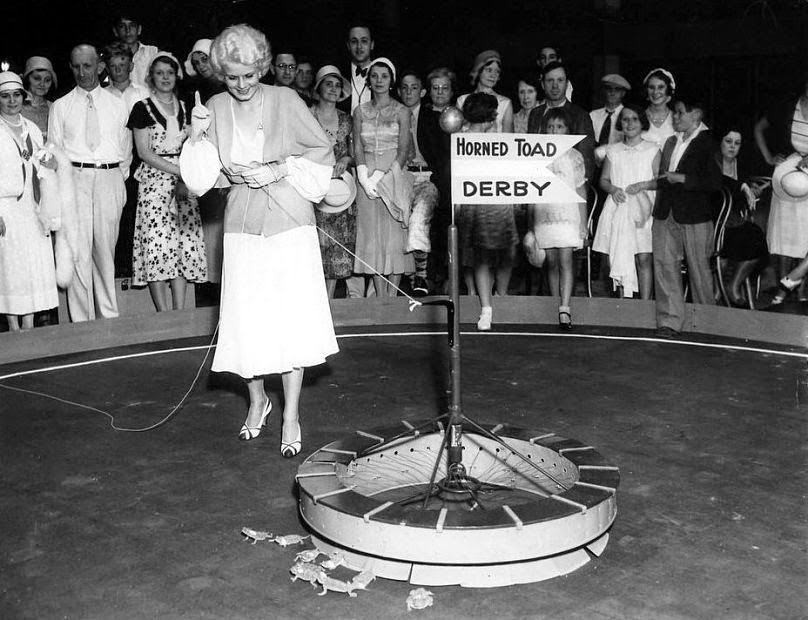 Sexy Birthday Lizard! And this one combines both an attractive actress and reptiles, as Jean Harlow judges the 1931 Horned Toad Races.

[It's the last day or so of our fundraiser; please click here for both the hair-raising and fund-raising details. Thanks.]
Posted by Scott at 2:34 PM

Sexy Birthday Lizard! And this one combines both an attractive actress and reptiles, as Jean Harlow judges the 1931 Horned Toad Races.
--------------
WOO!

"None of us will be free until I can bellow racial slurs without people objecting."

And a very happy birthday to Jacquie! Fun fact about your SBL: the horned lizard can cry blood, much like Le Chiffre in "Casino Royale", suggesting that Ian Fleming was way ahead of David Icke on the lizard people conspiracy.

Have a happy one, Jacquie!

The Indian of Peter Pan has outgrown a teepee, which was a symbol of his indigence

Er, no. It was a symbol of a nomadic lifestyle, which we forced the surviving Plains Indians to exchange for a life of settled indigence on the reservation.

Of course, far be it from me to question a philosopher of Jeremy Egerer's caliber. Point at, and snicker derisively, yes.

Happy belated birthday ma'am. Nice cheesecake. Can I have a little bit?
You know you can de-lurk every now and then. We don't bite (well, at least not most of us).

I'm still trying to parse that. Maybe some Italian food will help...

Before I read this treatise I thought understanding Wittgenstein's "Tractatus Logico-Philosophicus" meant I had mastered logical positivism. Now I realize there are aspects of that field no one can grasp without psychodelic drugs and a gibberish-to-English dictionary.

Can I nominate Jacquie to have more than one birfday?