[Our cup of wassail runneth over, as longtime Wo'C correspondent Bill S. gifts us with a whole Marshall Fields window full of Christmas crap! -- Scott]

The Christmas season is upon us. A time for buying presents, then worrying that they aren't nice enough, then wrapping them and worrying that you did a sloppy job. A time for making homemade fudge for the Christmas party, then making a second batch because after "sampling" a few pieces from the first one, you ate the whole thing (or maybe that's just me). A time for festive songs about Chipmunks roasting on an open fire. (Well, that sounds festive to me anyway.)

And it's also a time for Christmas movies and TV specials. Along with annual favorites there are also some...not so favorites. So as my gift to all of you, here are a few "also rans" you may have missed. If you were lucky.

Grandma Got Run Over By a Reindeer (2000) Remember those animated TV specials inspired by popular Christmas songs like "Rudolph the Red-Nosed Reindeer", "Frosty the Snowman", "Santa Claus is Coming to Town" and "The Little Drummer Boy"? Sure you do! Even if the stories didn't always hold up with repeat viewings (In Rudolph, Santa comes across as kind of a dickbag), they boasted great animation, catchy songs, and big stars supplying voices (Fred Astaire, Mickey Rooney, Greer Garson and Jimmy Durante). Well, here's another to add to that collection -- on the bottom of the pile to protect the others. Based on the 1979 novelty record that achieved popularity in the '80's thanks to a sort-of-funny music video, this hour long special tries to tell us what really happened on that fateful night. The story is told through the eyes of Grandma's 10 year-old grandson Jake Spankenheimer. It's narrated by the adult Jake, as if the story is taking place decades ago, although the characters are using technology that didn't exist in the '70's. So we must be hearing Jake 35 years in the future I guess. In any case, Grandma disappears on Christmas Eve, and all evidence points to her being trampled to death by Santa's reindeer, except for the fact that there's no body. She's presumed dead, which doesn't seem to faze Grandpa too much as he appears to be senile. The story's baddie is Cousin Mel, whose voice is supplied by Michele Lee (if there's a wrong way to pick a holiday special, nobody does it like she), who with the help of attorney I.M. Slime, attempts to sell Grandma's shop to a wealthy businessman. Of course it turns out Grandma isn't dead, and shows up before the sale can go through and oh, Sweet Lordy Gordy, who the hell is this cartoon for anyway? The animation is crappy, the songs are worse (the title song is actually the best one) and Mel and the lawyer wear cleavage bearing outfits while singing a duet that ends with them wiggling their butts at the audience.

How the Grinch Stole Christmas (2000). There's a reason the 1966 animated special is universally beloved: it's very nearly perfect. It's produced and directed by the great Chuck Jones (who brought in voiceover vet June Foray for one memorable line), features clever songs, and narration by the wonderful Boris Karloff. It's funny, it's got a great story, and conveys a nice little message ("Christmas day is in our grasp, so long as we have hands to clasp.) Everything in it works. And in the abysmal live action version,  nothing works. Well, almost nothing -- Anthony Hopkins, who narrates, is a worthy successor to Karloff. The movie actually won an Oscar for its makeup, and to be sure, the transformation of Jim Carrey into the Grinch is impressive -- he's so buried under the makeup it hardly even matters who's playing the character at all. The actors playing the Whoville residents aren't quite as lucky -- Christine Baranski and Molly Shannon are made up so grotesquely they'd make Diane Arbus cringe. But that's not the worst thing about this movie. No, the worst thing is the way they managed to miss the entire point of the original story.  In this version, the Whos are assholes and the Grinch is lonely and misunderstood. Did we really need to mine the depths of his soul? And here's how completely off this thing is: remember in the cartoon, that the Grinch's heart was "two sizes two small", until he's moved by the sweetness of the Whoville residents and his heart grows three sizes? Well, in the live action version, it seems to be literally happening, and the Grinch writhes around like he's having a heart attack, in genuine agony. Which we, in the audience, can relate to. When I watched this movie with my brother and my then three-year old nephew, my brother had to convince the boy to sit still, telling him, "C'mon, it's funny". And hour into it, my nephew rose, looked at my brother and, in a tone of righteous indignation cried, "This is not funny!" My brother had to admit his son was right.

Comfort and Joy (2003) Not to be confused with the charming 1984 comedy of the same name, this Lifetime Original tells the tale of Jane (Nancy McKeon) a single woman with a successful career who, after being struck unconscious in an auto accident, awakens to find herself in some weird parallel universe where she's a wife and mother. Everyone seems to know her as this woman she isn't, including her children (upon seeing them for the first time, she screams in horror) and her husband, who's played by Steven Eckholdt. (You may remember him from his role on the sitcom Ellen. He appeared in the famous "Puppy" Episode, playing the last boyfriend Ellen Morgan has before realizing she's a lesbian.) Since Jane has no idea how to navigate this role of Happy Homemaker that has suddenly been thrust upon her, she makes alarming goofs. For instance, when preparing the stuffing for Christmas dinner, she dumps in a bottle of ketchup. Which means she's not only never cooked for herself, she's also never eaten. Eventually she comes to enjoy the role, before waking up again to her old life. I guess the lesson to be learned here is that for a successful single woman to find PTA meetings and household drudge work rewarding, all it takes is a massive head trauma. Which is probably true. 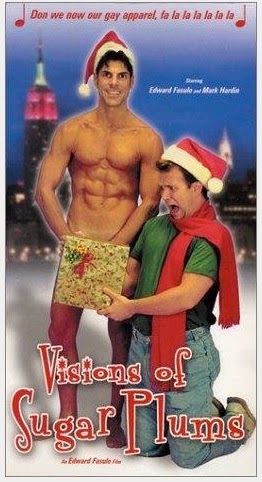 Visions of Sugar Plums (2001) On Christmas even a young gay man anticipates a visit from his strict conservative parents, who he hasn't come out to yet. It's a little like The Birdcage (minus the genius of Robin Williams, Mike Nichols and well, everybody else) and a little like Make the Yultide Gay (minus the warmth, sweetness, and Canadian cutiepants Adamo Ruggiero). This low, low, low budget movie sounds like it might be a broad comedy but instead is stiff, humorless and depressing. It was produced and directed by one Edward J. Fasulo. See if you can guess from the artwork on the video box, which one is him, and which one is the guy he cast as his love interest. If you guessed he was the short, schlubby guy on the right...well, good guess, but wrong. Nope, it's the beefcake model, and that's the only surprise in this thing. Actually, he does know how to frame scenes and edit. Unfortunately the sound mixing is so bad that you can barely hear anything during long stretches of the film. Even more unfortunately, the sound comes in just fine during the token drag queen's terrible standup act. On the bright side, this whole movie clocks in at about an hour and five minutes. So our suffering isn't prolonged.

Jingle All the Way 2 (2014) A sequel to the 1996 comedy. Did we need this? The first one only left one question unanswered: is there any actor more painfully unfunny than Arnold Schwarzenegger? Well, in this one he's replaced by Larry the Cable Guy, so I guess there's your answer.

Saving Christmas (2014) The newest film on our list -- a future holiday favorite, perhaps? By now you've probably heard of Kirk Cameron's weapon in the imaginary war on Christmas.
Well, that looks like...something. In an effort to bolster the movie's popularity, Kirk encouraged his fans (he still has them?) to give the picture glowing endorsements on RottenTomatoes.com, before the picture even opened. Unfortunately he neglected to do the same for the Internet Movie Database. As a result, this movie now has the lowest rating on that site. It's still ranked at #1 on the Bottom 100. That means it's got a lower rating than Plan Nine From Outer Space. A lower rating than Birdemic. Lower than From Justin To Kelly. Worse than Manos: The Hands of Fate, Exorcist II: The Heretic, Baby Geniuses 2: Why the Fuck Does This Exist? and The Room. It ranks below even Ben & Arthur, which I might have mentioned was the worst movie I've ever seen, and lower than Like Father Like Son, Listen To Me, Left Behind, Fireproof...sheesh, has Kirk ever made a movie that wasn't absolute garbage? All of which leaves me oddly curious to see it, if only to find out whether it lives up to (down to?) its reputation. Alas, it's not out on video yet, and no way am I spending 10 bucks on a movie ticket, so I guess you'll have to wait until next year for a full-length column on it. So until then, here's hoping all of you have a Cool Yule.

So "Comfort and Joy" is a reversed sex roles remake of "The Family Man" (2000), where Nicolas Cage discovers he's married with children to Tea Leoni (before she became Secretary of State) and somehow learns to enjoy it (could it be that hard? I mean, it's Tea Leoni!).

This is on my watchlist for tomorrow.

Come on, those are all awesome movies.
~

And a full 7/10 of a star worse than A Nymphoid Barbarian in Dinosaur Hell. (I've seen that one, and I still couldn't tell you what the hell is a Nymphoid, much less how you can distinguish the civilized ones from the barbarians.) Saving Christmas must have some bad-ass bad movie mojo.

Good choice, acrannymint. At least, I liked RE a lot, when I watched it on Netflix last year. Now there's a movie I could make a Christmas tradition.

There is also this classic

Has WoC ever covered the 1965 TV special "The Dangerous Christmas of Red Riding Hood"? It stars Liza Minelli, Cyril Ritchard (sp?), and The Animals. And it is terrible. Look for it in dollar bins everywhere.

Jim, based on your description of it, I YEARN to see "The Dangerous Christmas of Red Riding Hood"!