As a professional deadline-blower I'm currently blowing deadlines like a badly procrastinating Category 5 hurricane, and as a result of all this roiling toil, I nearly let a very important occasion pass unremarked: Today is the natal anniversary of longtime Crapper and accomplished cat-owner, acrannymint!

Unfortunately, I'm so far behind on work that I didn't have time to scour the Internet for some commercial image of disgusting food, then do a long, unwanted exegesis of the ad copy that leaves everyone feeling vaguely queasy and resentful.  Fortunately, I confessed my plight to Sheri (who, as old-timers will recall, gave the recipes in The Gallery of Regrettable Food the test kitchen treatment in the early days of Wo'C, thereby unimpeachably establishing her bad food bona fides) and she found the perfect meal for today's political climate: "Sexist Soup!" 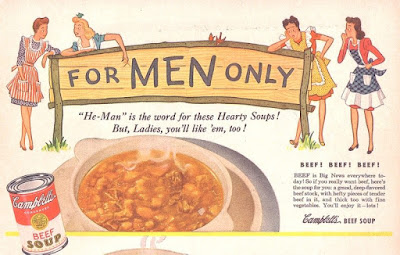 It's the He-Man Women Haters Bisque. Just season with Pick-Up Artist to taste, garnish with a Mens Rights Activist, and you're ready to cater your next Gamer Gater affair!

Speaking of men who like to drink other men's milkshake but don't like women drinking their soup, you may have read that a number of GOP politicians and mouthpieces are playing hooky from the Pope's address to Congress, because he might mention stuff Jesus talked about (e.g., piling up riches won't get you into heaven, be kind to the poor, etc.) and not the stuff Jesus implied with a wink and a St. Nicholas-like finger laid along his nose (e.g., don't vaccinate your kids, because without leprosy to cure, what would Jesus do all day? And also remember to support God's holy warriors, your local County Clerk -- I'm sure some artistically inclined wingnut is hard at work photoshopping an Andrew Breitbart-like tribute, showing the Archangel Michael bestowing a flaming sword upon Kim Davis and Howard Sprague).

Anyway, you know how people who you don't really know all that well can wind up as a Facebook "friend" because they share one of your particular interests? And how sometimes they turn out to be, in Sheri's words, "the wingiest of nuts"?  Well, the image below showed up in Sheri's FB feed, much to her amusement, and she decided to share it with me, and I thought I'd share our conversation about it with you guys, because I really don't have anything else ready, even though I was told to have a two minute song prepared and come dressed to move:

SHERI:  I just thought you might enjoy Brian Kilmeade exhorting the Pope to "take on Islam." Because the Crusades worked out so well. 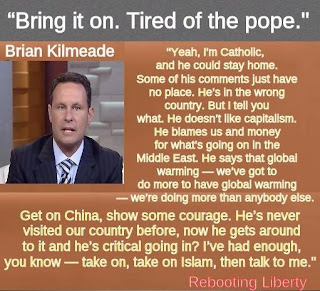 Bring On Your Pope Fatigue!  Brought to you by Rebooting Liberty, who suggest that before calling Freedom's Help Desk, first try turning the Constitution off and then on again.

SCOTT:  Wow. I mean...Yeah. The Pope should be able to cajole a billion Muslims out of their heartfelt faith, but he should stop trying to talk the Koch Brothers out of their profits, because that's Holy Hubris! Actually, I bet Fox news would be okay with another Crusade -- thrilled, even. Of course, you know what Christendom did to the Jews the last time they conquered Jerusalem, but I guess that might come as a relief, since Fox could finally stop pretending to care about Israelis as people rather than Apocalypse fodder.  (Does Fox even have any Jewish hosts? It seems like they're all other either dim-bulb Irish guys like Kilmeade, red-faced shouty Irish guys like O'Reilly and Hannity, or leggy blondes who all have "Tri-County Summer Squash Queen" somewhere on their resume.

SHERI:  I think that's how Fox gets their News Bimbos: they hold regional harvest festivals, and the blondest, dimmest girls get to be news hosts, and the rest are thrown into volcanos, to appease Rupert Murdoch. Anyway, I love how people are claiming to be God-fearing Catholics, but won't support the Pope when he urges people to follow the teachings of Jesus instead of the teachings of The Holy Tea Party.

SCOTT:  You've uncovered their secret recruiting process! I just assumed Murdoch sent someone (probably Jesse Watters) to Midwich to hire away all the grown Children of the Damned, which I'm sure came as a relief to the locals, because who wants creepy, dead-eyed blondes pumping your gas or selling you Dilly Bars? I also have a scene in my zombie movie set at FNC, where they all realize that despite being Second Amendment badasses, none of them has a gun, because they're in New York City, which is a Constitutional No-Go Zone! So tough guys like Hannity and O'Reilly have to hide under their desks as the ravening hordes pound and claw at the studio doors.  Fortunately, all the lady hosts have "Baton Twirling" under "special skills" on their resume, and suddenly it looks like The Walking Dead meets the Super Bowl Halftime Show!

And you're right about these foul-weather Catholics (who were only too happy to tell us we had to do everything the Pope said when he was Benedict). Turns out they have so many deep-seated issues with Mother Church they should skip confession and go to Freudian analysis instead.

SHERI:  I want to see your zombie movie now! I want to invest in it and get screen credit as an executive producer!

SCOTT:  It's a deal! Full disclosure, the last producer did have a slight problem with story logic: "Zombies eat brains, right? So why are they bothering to attack Fox News?"

SHERI:  Well, it's like how humans eat food, but they still buy Pop Tarts and Doritos.

So I think we've settled that. In the zombie apocalypse, loud, ham-faced guys will die first, majorettes last, and zombie moms will make zombie kids eat all their Shep Smith, and save their tooth-rotting Brian Kilmeade brain for dessert.

But no birthday would be complete around here without a Sexy Birthday Lizard! I believe Cranny is an Atlantic Seaboarder, so I looked up a reptiles from her neighborhood, and decided to go with this Eastern Fence Lizard, because he's giving such a suave, knowing look to the camera: 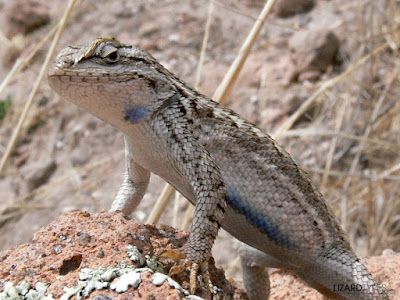 Well hello, there. I hear it's your birthday...

Please join Sheri and me in wishing acrannymint the very happiest of birthdays!
Posted by Scott at 2:08 PM

So one of his complaints is that he has no right to critique America because until yesterday he's never been here, but encourages him to 'get on' China because...As an ex-Catholic who has LONG been on the other side of "Shut Up Pope" opportunities, I'd like to take a minute to give Brian the kind of response to which I've been accustomed receiving from Catholics who have disagreed with my heresies: FUCK YOU.

Man, you can just hear that lizard growling low and lustily...

And happy birthday from me too!

acrannymint, there is something very special, nay, precious about having your birthday be the occasion of a real, honest-to-Equinox transcript of a dialogue between the Awesome Founders posted for all of us groundlings to enjoy! And that he-man soup isn't so awful, either (love the posing 40's-vintage housewifettes at the top).

Some birthday! Many happy returns, and can I go out with that lizard next? He's sexy!

I am a proud resident (almost) of Bawlmer, Merlin. As a thank you for the kind wishes I give you the newest addition to the Mint household. He told me his name is Loki.

What a cutie Loki Mint is! Congratulations on the new baby, and thanks for giving him such a good home. Oh, and happy apres-birthday (which is the day you get to give yourself everything you wanted for your birthday, but didn't get).

Your newest addition is unconscionably cute. Those ears are magnificent. Another parlor panther joins the Crapper family!

Our Ninja wasn't much bigger, when he showed up one night in our back yard. I wouldn't have noticed him at all, if he hadn't insisted on dashing out of the shadows and running up to our Maine Coon, only to instantly scoot back under the car. Although he wouldn't let us anywhere near him, he conceived an instant, overwhelming affection for our old, almost completely blind dog, Blanche. Who was fortunately an amazingly tolerant creature, when this stranger insisted on twining himself around her legs while she was trying to locate the proper spot to relieve herself. Although she did have this "Who the hell are you?!" expression ...

Trust the god of fire and troublemaking to show up as a darling little skinny black furry fella nobody can resist. I know you'll all be very happy under his paw!

As is typical, I drag my sorry behind in several days late and an incalculable number of dollars short, but I hope your birthday was magnificent, acrannymint! Looking at the furry bundle of magic that is Loki, I have every confidence that it was.