This is an unusually busy week for me, involving a lot of non-blog writin' an' thinkin' and wishin' and hopin'. But it's also a week with an unusually high Birthday Index (as longtime Crappers know, the first week of September signals the beginning of Peak Nativity Season around here, because something about wingnuts and bad movies attracts the kind of people whose parents liked to get randy in the bleak midwinter), so I hope you'll forgive me if the celebrations aren't quite so elaborate as they've been in years past. Rest assured, we still have the saucy mammals, the sexy reptiles, and the disgusting food, because apparently that's now a thing (don't ask me how these traditions get started, I just work here, and my manager's already making me stay late and help with inventory, so I can't even...).

Today's celebrant is both a classic movie maven par excellence and a historian of Golden Age television nonpareil, an eminence grise of noir et blanc, an authority on Old Time Radio (and the kind benefactor who made it possible for me to know more than I ever hoped, expected, or believed possible about Mr. Keen, Tracer of Lost Persons), the sort of vacuum-tubed human ENIAC who will respond to a Facebook friend's querulous queries about what the hell's the deal with "Rio Grande 'Cracked' Gasoline" by calmly explaining that Rio Grande was the sponsor for Calling All Cars, a 1933-39 police drama that aired on the West Coast over the Columbia Broadcasting System. It doesn't help, but you feel smarter for knowing it.

And by now you've probably guessed (from the title, if not the above description) that today is the natal anniversary of Ivan G. Shreve, Jr., proprietor of Thrilling Days of Yesteryear. So let's get this party started! 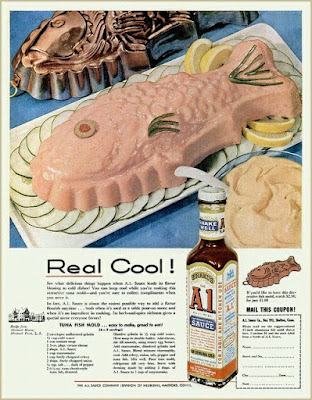 See what delicious things happen when A.1. Sauce lends its flavor blessing to cold dishes!

Bless me A.1. for I have sinned...against flavor!


You can keep cool while you're making this attractive tuna mold--and you're sure to collect compliments when you serve it.

When they taste it, however, you're sure to collect knife and shrimp fork wounds, so serve it quick, and maybe leave the motor running...


In fact, A.1. Sauce is about the easiest possible way to add a flavor flourish anytime . . . both when it's used as a table pour-on sauce and when it's an ingredient in cooking.

I agree, pouring A.1. sauce on the table would probably be tastier. Nevertheless, we're in no position to be choosy about our sponsors, so let's just swallow our gorge and gather around the Philco, because the show's about to begin!

The A-1 Tuna Mold Hour brings you the exciting adventures of Ivan Shreve, Master Blogger!

(Cue Dramatic Theme Music: The Yodeling Chinaman, played in a minor key on the Hammond organ)

Oops! Sorry guys, we won't have time for this week's episode. Sadly, while Ivan stars in a taut, weekly suspense drama, I'm in one of those daily 15-minute sitcoms like The Goldbergs, and as usually happens, my wacky neighbor Seymour Fingerhood just walked in. And seeing as he's played by Arnold Stang, I really need to concentrate on getting him back out as quickly as possible.

Also, and I hate to say this, but I liked the early episodes of the show better, when it was Ivan and his Doc Savage-like companions, "the 'rents", solving crimes in the gritty big city of Athens, GA. Once they moved the action to Winterville ("the City of Marigolds"), the pace suffered, and it began to feel like The Doris Day Show, but in reverse.

So let's just get straight to the cheesecake, shall we? Here's a rare photo of TDOY goddess Jane Greer actually smiling, because it's a beautiful sunny day and she's just finished burying the sap she double-crossed, and smothering his body in quicklime. 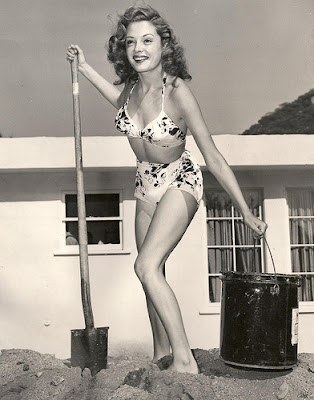 And of course, no birthday would be complete without a... 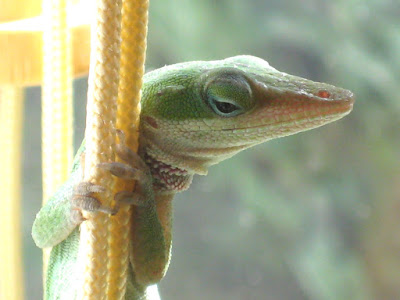 (I believe this is a Green Carolina Anole, which can supposedly be found in Georgia, but I make no guarantees because this is the Internet, and the Internet means never having to say "I fact checked.")

So please join me in wishing Ivan the very happiest of birthdays! Now if you'll excuse me, I've gotta go see if I can foist Arnold off on the cast of That Brewster Boy, or The Horn and Hardart Children's Hour.
Posted by Scott at 1:17 PM

You know, I had never heard of "Mr. Keen, Tracer of Lost Persons" until my neighbor explained the origin of Bob and Ray's "Mr. Trace, Keener Than Most Persons."

I miss those guys.

At this age a yr. passes like nothing, dunnit; it's still no small achievement to get through it, & then to keep going. (Hope all is well/better at a new(er) Rancho Yesteryear.)

Today's Dating The Dead Pin-Up Selection looks 12 going on 22 until you catch the bags under her eyes.

Have a Super Duper Fantastic Birthday.
Or if that's too much, just a Duper Birthday.

Who the hell does tuna molds...

Does anyone but me see subtly mordant humor in that tuna mold? I mean, how hard is it to imagine the photographer's assistant putting an "x" of crossed pimento strips on the green-olive eyeball... then the photog saying, " Yeah, Jonesie... but we'd never get it by Editorial."
I want an anole for MY birthday. Not only sexy, but adorable.
Many, many erudite returns, Ivan!

Harrumph. I'm sure that tuna mold was both delicious and moldy.

Happy birthday Ivan. For the love of all that is holy, don't eat the cake. The tuna mold is Soylent Green!

And yes, anoles are lovely, and Scott has thoughtfully offered an adorable green male, they change color, green means happy. Technically, a sexy anole is green with a red dewlap, so this is indeed a very sexy birthday lizard. Given that his dewlap is apparent but not extended and he's not angrily challenging sexual rivals, this is basically the platonic ideal of a SBL. Well played, Scott.

They actually don't change color that much, but they are rudimentary mood lizards, in that if they become unhappy they turn brown or occasionally, if they are only going to be unhappy briefly on their way to lizard heaven, black. So happy green sexy birthday lizard!

Late to the party (again) but late yet sincere happy birthday wishes to Ivan.

Li'l Innocent, if only I had a decent camera on my phone I could supply Scott with a picture of a Knight Anole, which looks much like the Green Carolina Anole, except about oh, a foot bigger. Bordering on Kaiju, really.

Happy Birthday, Ivan! That "tuna mold" does look truly awful. I wouldn't be at all surprised to find that a lizard or two wound up in that thing....

Green Anoles are gorgeous critters. I saw one for the first time last year, in southeastern TN, so it's a pretty safe bet they're found in Ivan's neck of the woods, too. Unless they're allergic to marigolds.

And there's only one thing I can say, after being confronted with that tuna mold:

Of course, I could never deliver that line with quite the sibilant, lip-smacking glee as Preston Foster portraying a completely mad scientist, but I'm sure the b-day boy will appreciate it anyway.

I hope you and the 'rents are comfortably ensconced now, after that epic migration from the old homestead.