It's a big day here at Wo'c, because we're celebrating the natal anniversary of our founder, s.z., without whom none of us would be here today, looking at the nauseating food I'm about to show you. 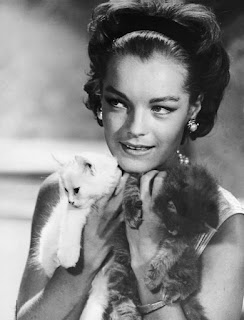 Sheri is, as I've said before, that most rara of avis, a saint with a sense of humor. She spends her time and energies looking after the widows and orphans in their distress, yet still manages to keep herself from being polluted by the world. Which is obvious when you read her stuff, because no matter how vile and deserving her targets may be, she never stoops to their level, instead rinsing their dirty laundry and mixed metaphors in gentle but thorough snark, so they come out -- not fresh and clean, exactly, but so entertainingly tie-died that Jonah Goldberg has to go into work on Monday and explain why his Grateful Deadish Dockers make him look like an Arby's manager trying to sneak into Woodstock.

And as a rara avis, her writing is sui generis -- devastatingly witty but never mean-spirited, deeply moral but never moralizing. And always, always funny. In fact, Thers of Whiskey Fire once said, "SZ in particular doesn't get anywhere near the credit she deserves. SZ invented left internet snark in a lot of ways."

For that alone she deserves some sort of monument (I understand the Church of Satan is practically giving those Baphomet statues away, and it should be a simple thing to swap out the heads like Barbie dolls), but the reason we don't see her around here as much as we'd like is because she helps run an animal rescue operation (but not, I hasten to add, Operation Rescue) in a town which not only lacks a shelter, but also apparently believes in preserving the lives of animals only long enough for them to become delicious. So Sheri spends most of her time and nearly all of her money fostering strays, nursing sick and injured animals, and adopting them out to their "furever homes", if you'll pardon my jargon.

And now, without further ado, let's start the festivities!

Sheri said she wanted a prune party for her birthday, just like preznit got back in July, but apparently that was a short-lived fad (you know how the kids are these days, with their phat pants, their hula hoops, their desiccated plums). But meat loaf, well...meat loaf is eternal. And glorious, once you add the magic ingredient -- no, I don't mean "love," or some such crap, I mean rubbery snap beans that savor faintly of the Bolivian tin can in which they were entombed by Del Monte.

So belly up to the buffet, birthday revelers, and tease your taste buds with Meat Loaf Glorified by Green Beans. 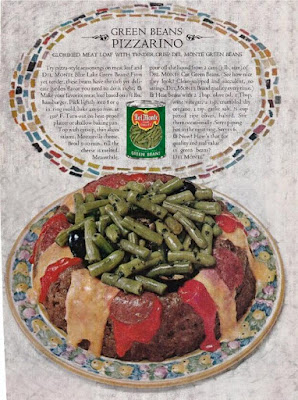 I dispute your right to an exclamation point.


Firm yet tender, these beans have the rich yet delicate garden flavor you need to do it right.

Do what right?  If you find yourself making a meat bundt cake and interring it beneath a neolithic burial mound of green beans, you need to question whether you've ever been right about anything in your life, and if the answer is no, you need to do a further personal inventory to figure out if you're actually Bill Kristol.

I won't bore you with the entire recipe, since there's really only one crucial direction, which comes at the end, and I predict that this single sentence, once seen, will haunt you for the rest of your natural lifespan:


Serve piping-hot in the meat ring.

Words to live by. Especially if you live in West Hollywood.

You know, over the course of twelve years and three separate domains, World O' Crap has served over three million unique visitors, and that's entirely due to Sheri's all-too-rare belief that goodness should be a thing one lives every day, and evil should be a thing one pokes gentle fun at.

Speaking of goodness, I've been trying to think of something nice to do for Sheri's birthday, some token of appreciation for the years and years of gratis snark (plus all the free refills), and it occurs to me that maybe today (adoption day, as it happens, which she spends trying to find families for homeless dogs and cats) we could make her life and the lives of those she saves a little bit easier by contributing to Four Paws, her animal rescue organization. And as it just so happens, they're having a fund raiser right now, the 15th Annual Moondog Ball... 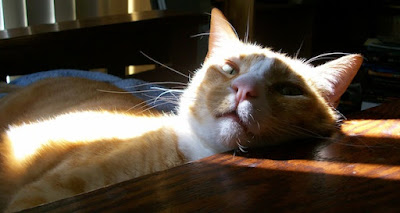 Anyway, if you click on that link, you'll see a Pay Yer Pal button on the right side of the page. Or you can send a cash, check, cheque or czech to:

As Sheri has noted previously, "[W]e are an all-volunteer, no-kill rescue group, [so] 100% of your donations are used to feed, house, or provide vet care for the cats and dogs we are caring for and hoping to find homes for."

And now, let us close in the traditional manner, with a: 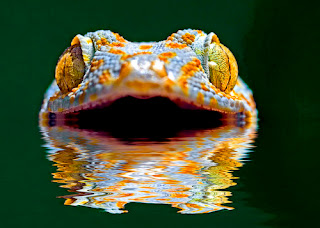 Happy Happy Happiest of Birthdays, Sheri! Now, I've got to get to the store and buy some Del Monte Greenbeans, ground meat, pizza seasonings and bread crumbs. That piping hot meat ring won't be making itself!

SZ, I hope your birthday is as joyous as the day I first discovered World O' Crap.

The SBL reminds me of the end of "Apocalypse Now", for some reason, and that food atrocity at the top looks like the Horta from "Star Trek" carrying a load of cucumbers on its back.

Something from "Star Trek" was my first impression, too, Doc. But it put me in mind of some of the Klingon delicacies from the later series. I can just imagine those green beans slowly seething and palpitating.

Happy birthday, S.Z., ministering angel to the fur people and founder of this most excellent blog. Who pressed the first blockquotes with her own hands.

Yes, birthday best wishes on behalf of all the non-humanoids Sheri's helped!

Have a Super Duper Birthday!Or, if that's to much excitement, just a Duper Birthday.
I thought "Baphomat" was something you set on the floor next to the tub so your feet don't slip when you get out of the shower.

And hello Moondog the awesome cat! :)

I'm not sure I'm glad I'm around today!

And you're saying I have someone I can blame?

And many happy more to to Ms. z.

Happy Birthday. Now keep that... that THING away from me. I refuse to believe anybody ever made and ate that.

Ooh, so egregiously late and unable to type properly due to the mink-brown furry grand duchess sprawling on my chest. Appropriate, though, right? You're the Top, Sheri. Happy, happy birthday plus 1, I owe you quite a few chunks of daily sanity!

By the way, if you print out that photo of the meatloaf ring in blac and white (the only colors my printer has), it looks just like an ashtray overflowing with cigarette butts and loogies.

Not much more disturbing than the original, actually.

Wow, that lizard is hot! It looks beaded!