The Exorcist 6: The Update 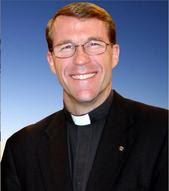 Because it's not everyday that you hear of an exorcist sex scandal, I did a little googling to see if there is anything more on the Father Euteneuer story. While Tom O'Toole does seem to have an exclusive on it, I did find a Palm Beach Post story from a few days ago which has some interesting details. So, here are the highlights.

It was a classic cable-TV shouting match.

After criticizing Fox Television commentator Sean Hannity for being soft on the abortion issue, Rev. Thomas Euteneuer said he would deny Hannity communion because of his views.

Maybe I was wrong about the Father -- anybody who can shut up Hannity even temporarily can't be totally evil.

That was three years ago. Euteneuer was the president and the very public face of Human Life International, a worldwide anti-abortion organization. [...] He was also an exorcist. HLI, his publisher as well as his employer, was promoting his new book on its website.

But this summer, without warning, Euteneuer, 48, left his HLI post, saying he had been called back to the Palm Beach Diocese by Bishop Gerald Barbarito. His book on exorcism disappeared.

If we didn't already know what happened, I'd say it was probably the work of demons.

In another interview, Euteneuer said one demon offered to help him with his Latin if he would let him stay put. Asked by the interviewer if that might be an example of demonic humor, Euteneuer retorted that demons have no sense of humor.

And, as we know, Hannity has no sense of humor. Therefore, Hannity is a demon. QED.

He condemned the Harry Potter books and movies, the Twilight vampire books and movies and the television sitcom Sabrina the Teenaged Witch as vehicles for the devil to enter weaker natures.

As the old saying goes, the path to hell is paved with Sabrina the Teenaged Witch.

He also advocated that exorcisms be performed outside abortion clinics, which he described as "temples of a demonic religion."

"Senator Kennedy will not be missed by the unborn who he betrayed time and time again, nor by the rest of us who are laboring to undo the scandalous example of Catholicism that he gave to three generations of Americans," wrote Euteneuer in an official HLI statement in 2009.

Um, yeah, that's what Fr. Tom was doing with those women: "laboring to undo the scandalous example of Catholicism."

By September, it was nearly impossible to buy a copy of his book, Exorcism and the Church Militant, just published in June. One online bookseller was offering it for $975.

Since the exorcism book became scarce, its value has shot up. Royal Oak, a used-book seller in Virginia, this month sold its only copy of Exorcism and the Church Militant for $500. Royal Oak priced the book at $500 after seeing the $975 price online.

Just think, if you had bought a million copies of the book back in June, you could be a millionaire right now! Plus, you would be the only one in the world who would know how to drive out the demons, and you could extort them for millions too! But maybe they thought of that first, and THEY are the ones who bought up all the copies. If so, you'll probably see them showing up on eBay any day now.

"Rumors that the book was 'pulled' or 'recalled' are not true," said Stephen Phelan, Human Life International spokesman. "We released Father Euteneuer's Exorcism and the Church Militant in June, and sold out of it some time after his departure from HLI, so it was on sale for over three months. It was decided not to reprint it as we no longer had Father Euteneuer on hand to explain the connection between exorcism and our pro-life mission, and we wanted to focus completely on our mission going forward."

Yeah, it would be kind of hard for the lay person to explain the connection between exorcism and the unborn.

But hey, here's somebody who can maybe do it.

Euteneuer became a hero to Christy Larker after she met him several years ago at a Catholic radio conference in Alabama, where she lives. She was then pregnant with her seventh child.

"Within that first trimester, I was experiencing something of a demonic nature," Larker said. "Something was not right. He was the keynote speaker and afterward, I went up to talk to him about the things I was struggling with. He laid his hands on me and started praying. By the end of the week I was set free from whatever it was. People noticed that I had a greater sense of peace. Several months later, I was told that he was an exorcist. God is so good."

So, we are to assume that Christy's baby was a demon, and . . . Tom exorcised it? But what if it wasn't the only devil fetus out there. If so, then maybe he was all wrong about abortions. Hey, Father Tom, it's something to think about.
Posted by s.z. at 11:49 AM

Within that first trimester, I was experiencing something of a demonic nature

Science is conspicuously silent on intense discomfort during the first trimester. Truly, it is mystifying.

Within my first trimester I had a constant 24/7 migraine, hives, acid reflux, a craving for oranges and lemons, and it was summer with a nasty Heat Wave and we did not own an A.C. And yet... I didn't abort!

For some reason he reminds me of Caleb on "Buffy."

And, in a puff of smoke, he was gone, leaving behind a faint whiff of sulfur. Father Tom, I think not. More likely Father Temeluchus, summoned briefly from hell to torment poor Hannity with doubt.

The greatest trick the Devil ever pulled was being on Hannity's show.

The greatest trick the Devil ever pulled was pretending Hannity is not doing his bidding.

The greatest trick the Devil every pulled was pretending he wasn't Hannity.

Just to put a button on the thread, Father Tom confessed to the guacamole hitting the fan, in a letter circulated by his confessors on 2 Feb, to certain acts of sin.

According to the contrite Tom, not "the sex act", but something sort of like it, and in answer to detractors alleging that he conducted exorcisms of young women without supervision, he says that he never ever did it, well, never, hardly ever, except in case of emergency, and he never, hardly ever sought a fee for his services, except for expenses.