The Stoop of Stupidity

Randy Thomasson, in case you've never had the pleasure, is president of SaveCalifornia.com, and an insufferable busybody of Gladys Kravitzian proportions.  But instead of pressing his eye to the crack in the living room drapes, spying on the Stephens all day, Randy spends his life obsessing on the homos.  Sadly, however, he does not appear to have married a weary skeptic like Abner, so there's no one around to issue snide remarks from behind the newspaper and gently discourage Randy from making a fool of himself. 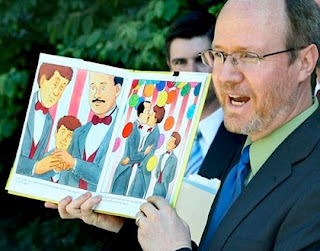 Randy Thomasson protesting Proposition 8, the Marriage Equality initiative by reading aloud from the French children's book, "Gaston Has Two Maitre d's."
So when the GLBT Historical Society opened the first gay museum in the U.S., Randy was moved to commemorate the occasion with an outburst of dumb.

"This is not so much a museum; this is a propaganda porch," he contends. "There [are] going to be some people who want to believe in lies while they're visiting, but anybody interested in real history is going to find so many pages ripped out of that book."

I hate when people rip pages out of my porch.
Interestingly, the original plans called for a "propaganda piazza," but funding was an issue, and the project architects were asked to instead design a "misinformation mezzanine."  When this option also proved cost prohibitive, museum officials considered a "falsehood foyer" and a "bullshit breezeway" before settling on the final concept.

Thomasson further argues that the museum fails to mention the truth about alternate lifestyles, as it omits information about the AIDS epidemic

Going to the museum's website and looking under "Topics," we see the following:

But in all fairness, it was second from the bottom of a long list, and by the time Randy got to:

...he was probably feeling the need to get out of the office and spend a little quality time with his wetsuits.

Anyway, what other truths about alternate lifestyles does the museum fail to mention?

Suspiciously, the National Bottle Museum omits this information as well.

as well as the trampling of fundamental and religious rights in the name of "equality."

Also, have you noticed that the museum at La Brea Tar Pits never mentions that evidence could show that all the mastodons, sabertooth cats, and dire wolves found fossilized in the pool of liquid asphalt were actually stabbed by a homosexual serial killer, like in the 1980 Al Pacino film Cruising.  (It's been a few years since I've seen it, but I'm pretty sure the murderer turned out to be a Harlan's ground sloth.)

Nonetheless, he believes the museum will continue to receive funding.

"I believe they'll have the money to keep this place open because it will become sort of a Mecca to them," the pro-family leader suggests.

I wonder who the pro-family leader means by "them."  Gays?  Tourists?  Mutated ants?

"And it's unfortunate -- celebrating a lie instead of acknowledging the truth."

Museums don't exist to preserve history, transmit facts, or inspire an appreciation for the arts, they exist to validate our preconceptions.  And, if it's not a holiday, our parking.


The GLBT Historical Society currently relies on donations and volunteers to keep the museum open.

While it's nice that there are people willing to contribute their time and money to a private institution celebrating the GLBT experience, it still seems unfair that Randy doesn't get to pick the exhibits.  But perhaps he could establish his own museum, one dedicated to the principles most dear to him: fundamental and religious rights, and molestation.

I hope Randy gets right on that, because I'm certainly looking forward to acknowledging the truth and ripping the pages out of his dogma dormer, prevarication parapet, and asshole annex.
Posted by Scott at 10:59 PM

Email ThisBlogThis!Share to TwitterShare to FacebookShare to Pinterest
Labels: Teh Gayz

Holy shit you're on a roll. This is exactly why I has a sad when I come here and there are no updates. Because when you guys are on, it's enough to expose even this asshole for the hack-in-a-box he is.

There's an argument to be made for not seriously engaging the arguments of a stinkbug like Randy. Good faith discussions are one thing, but people with that extra goto 10 line just need to be flicked out of the way so the rest of us can get on with the actual problem-identifying and -solving.

I'm not sure how to prioritize the many problems facing us as a country and a planet, but I'm pretty sure "two dudes kissing" doesn't make the cut in terms of what's going to cause widespread starvation or forced mass migrations. I think most people can probably agree with that, you never see people go shake the hands of the WBC pricks to thank them for lifting us out of poverty. If spending more thought on guys like that were going to help, it would have already.

So I plump for snarky dismissals which happen here as well as anywhere on the web.

Also: I would totally buy "Gaston Has Two Maitre d's.".

Sure, maybe they sit out on their propaganda porch sometimes, to get the breeze, but gays live the lie of...?

As a straight, I apologize for the terrible metaphor of my fellow white guy.

I gotta tell someone and Sadly No comments is FUBAR.

On WSJ website, they reference one story to WorldNutDaily (sic).S'True.
Suezboo

Good God Almighty, what a nutjob! Here's an idea, if you don't like the gay museum, don't buy a ticket! And then shut up about it.

I heard that the reason all the dinasaurs died out was because of too much of the gay sex together with too many paleo-abortions which resulted in not enough dino-babies for species to survive but you won't see that at the Discovery Institute's Creation Museum, nosiree Bob. Its political correctness run amok I tells ya.

Also, I have been to La Brea, I used to live near La Brea, and I can tell you there in NOT ONE SIGN reminding visitors that all of these animals were gay-stabbed a MAXIMUM of 5,900 years ago.

This is another "trampling of fundamental and religious rights."

(Amazing how much more pleasant it is to contemplate that quoted bit with of and and removed. And mastodons envisioned.)

A tour-de-force. When I read this:"This is not so much a museum; this is a propaganda porch," he contends. "There [are] going to be some people who want to believe in lies while they're visiting, but anybody interested in real history is going to find so many pages ripped out of that book" I thought of this:
http://creationmuseum.org/

@Brian: I thought of the creation museum too.
Randy is one of those professional "ex-gays". So when he talks about molestation, he MUST know what he's talking about. In fact, somebody she ask him how many kids HE molested.

My wife is of Armenian descent. I'm pretty sure some of her relatives are named "Kravitzian."