You may remember Lee DeCovnick, and if you do, that information will probably be included on your rap sheet under "Distinguishing Marks or Scars."  For those who don't, however, Lee is a retired bean counter ("Lee DeCovnick was a Senior Financial Analyst for a Fortune 500 company in the era of Lotus 1-2-3, 5 ¼" floppy disks, and monochrome monitors") who -- when last seen -- was engaged in a contest of epigrammatic one-upmanship with some imaginary Jews, and thrashing them soundly.

Well, he's back, and in keeping with this eerie time of year, with its ghosts, goblins, and discounted candy corn, he's returned to do battle with another mythical creature -- the Hardcore Alinskyite.

The hard progressive left in America has been unleashed into the streets by the community organizer in the White House.

The last time this happened, we accidentally unleashed them into the breezeway, and then the hard progressive left stepped on Bobby's pool noodle, and we had to fight our way through a crowd every time we needed to get to that faucet by the garage to turn on the sprinklers, so you can why we were so relieved to hear that this time they got an organizer to run the unleashing.


The current crop of street pawns, the banal cattle of Occupy Wall Street movement, are fed, herded, and coldly led by the professional agitators from ACORN, SEIU, and the Communist Party of America.

Again, you can probably spot the difficulty.  When two out of the three agitators responsible for feeding your pawns are either moribund or non-existent, you're going to get a back-up in the dining room; and half the time they wind up taking it out on the hostess.

Still, you've got to admit, we've had a nice crop of pawns this year.  And the rooks look about ready to drop.


These hardcore Alinskyites are well-funded and well-organized.


Through a series of set-piece street actions and media events coordinated with the White House, the street cattle's drumbeat attacks on capitalism, property rights, and traditional religious and working class values have successfully dominated the news cycles.

Speaking of action set pieces, Lee just spoiled the plot of the new Fast and the Furious sequel, Fast Six, which climaxes with an illegal, high octane race between rival gangs of street pawns and street cattle.


From the Cold War thriller The Hunt for Red October, Fred Thompson's character informs us, "Son, a Russian doesn't take a dump without a plan."  So too with these Alinsky inspired disciples who obviously have their own version of an American "Red October."

When not waving signs proclaiming themselves to be a percentage of the American people roughly equivalent to the amount of purity in a bar of Ivory soap, the protestors in Zuccotti Park are busy building a submarine with a magnetohydrodynamic drive out of love beads and bongos.  No wonder there's no room for port-a-potties.


Normally the last year of a lame-duck presidency is replete with overseas photo-ops and serious speeches on "what it all means." However, America is now burdened with B.H. Obama, a hard-left socialist president who will maintain and expand his control over the executive branch of the United States government, by any means necessary.

President Obama is ignoring our constitutional system of checks and balances and attempting to usurp the powers of the executive branch?  Isn't that grounds for impeachment?  Or at the very least, shouldn't we insist that he punch out by 5:30 so we're not getting charged time-and-a-half?


So what are the two primary short-term goals of the Alinskyites?

Long-term goals of the Alinskyites include:

1.  Get back to the gym.
2.  Call that guy about cleaning the gutters.
3.  Check recipe cards for vegan dessert options for Shelly's baby shower.
4.  Finish watching Season 4 of Who's The Boss? and return the discs to Netflix.
5.  Figure out how to move completed, 9,138 ton nuclear submarine from Zuccotti Park to the Hudson River without scratching the paint.


Desensitization.  OWS is funded through Soros and dozens of his interlocking 501(c)(3)s, the Tides Foundation, the CPUSA, AFL-CIO, SEIU, UAW, Islamic radicals, and, of course, Obama's BFF, ACORN.

You forgot SPECTRE, THRUSH, and C.H.U.M.P.

For fans of collective nouns (a "murmuration of starlings," a "rhumba of rattlesnakes"), an "abomination of Aliskyites[sic]" was officially added to the language with the release of the most recent edition of the Oxford English Dictionary, along with a "queef of wingnuts" and a "Sansabelt of retirees").


...is determined that America should become acclimated daily to the classic Marxist street rhetoric of financial inequality, anti-capitalism, and "lets all hate rich Jews, oh I meant Wall Street bankers."

After beating the Jews to a verbal pulp in his last outing, Lee and the Israelites have now become best friends.  It's just like The Quiet Man, except rather than killing a man in the boxing ring, Lee just talked one into a coma.


Big lies and the drum beat repetition of the big lies into a national consensus: where in 20th-century history have we seen this happen?  Oh yes, but back then it was referred as "Lebensraum."  And we all know how well that that turned out.

In July, 1942, SS troops exterminated the Jewish inhabitants of the Warsaw Ghetto.   In October, 2011,  unemployed people camping in a park held up some cardboard signs that hurt bond traders' feelings.  The parallels are almost too eerie.


Misdirection.  The Obama administration reeks of donor payoffs and political scandals.  Solyndra, Fast and Furious, LightSquared, SunPower, the list goes on and on.

And I'm sure if you go down the list far enough, you'll actually get to a scandal.


So what do you do, as a trained and indoctrinated Aliskyite, to deflect attention from these slip-ups?  You move the media spotlight onto those nasty Wall Street capitalists.

But the joke's on the media, because the Wall Street capitalists don't register on film or cast a reflection.


Use up the daily press cycles interviewing time-warped hippies.

Actually, I have some questions for the time-warped hippies myself:
1.  How did the S.D.S. wrest control of the Time Tunnel from General Heywood Kirk?
2.  What was the deal with the brown acid?
3.  Can you get me Lee Meriwether's autograph? 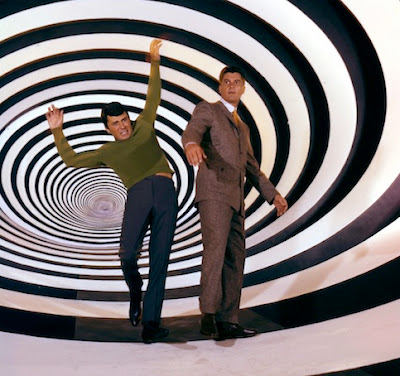 "Tony -- Look! America...it's just a bleak, desolate wasteland! You did it! You finally did it! You maniacs! You elected George W. Bush president!  Damn you all to hell...!"


The country is not looking at the causes or solutions; it is, in fact, hidden from our sight, by a few cattle herded from behind by the cold Marxist street agitators.  No doubt, Leon Trotsky must be smiling in hell's burning fire, admiring the handiwork of his 21st-century offspring.

As the Marxist street agitators are cold, and Leon Trotsky is hot, I'm going to eat the cattle's porridge, since it's probably just right.


America can now look forward to months more of these set pieces of Marxist agitprop, with the lapdog mainstream media dutifully and daily regurgitating OWS vomitus into our homes and onto our

But at least the lapdog media eat their own vomitus, although just to be safe I always pull out the Swiffer whenever I see Wolf Blitzer outside the CNN building, eating grass.


The Alinskyites will prevent Obama losing his control over the executive branch of the United States government, by any means necessary.  This is the key unwritten mission statement behind all the anti- capitalist, class warfare nonsense OWSers are spewing in the streets.  The OWS cattle are out there as disposable pawns in a new un-American and anti-constitutional national political process of brinksmanship, raw power politics, ideology, and class and racial warfare.

I wish the cattle would use cloth pawns.  I realize disposable pawns are cheaper and more convenient, but they're really piling up in our landfills.


Historically, communists have used violent "false flag operations" against their own useful idiots, to both gain sympathy and to allow tyrants to unilaterally invoke gun control in the name of national security.  Nazis did the same thing.  Marxist dogma also calls for coordinated multi-city street violence and rioting, as occurred in the communist revolution in Venezuela.

Remember, this isn't about an unregulated financial sector crashing the economy.  It's about Communist cows and Nazi chess pieces fighting over gang turf, then pausing to perform some snazzy Jerome Robbins dance moves.


The GOP had damn well better wake up fast to this new (to America) process, or they will have lost the initiative before the first roll of the die.

Oh, we're playing D&D now?  I can't keep pace with these metaphors.  Quick, somebody stall Lee while I look for my 12-sided die.  I'll show Mr. Floppy Disk how to roll some damn Initiative.
Posted by Scott at 12:02 AM

Email ThisBlogThis!Share to TwitterShare to FacebookShare to Pinterest
Labels: Get the Butterfly Net, No Country For Old Men