An Officer and a Pusscake 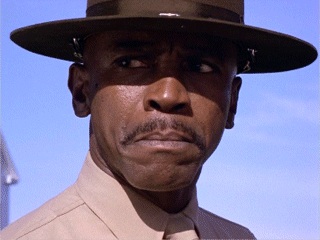 Earlier today I was standing in line at the pharmacy, scrolling through Twitter, when I happened to notice this tweet to Josh Marshall from a dissatisfied customer: 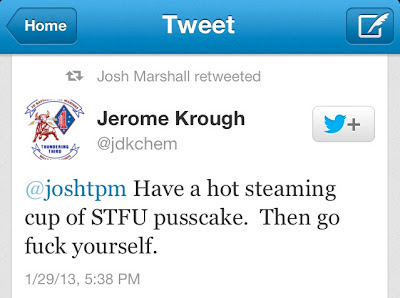 Personally, fucking yourself sounds like a lot of work, especially if, like me, you're self-loathing, because then you have to imagine that you're someone else just to get off (and if you're looking into a mirror while doing it, you've got to take care that you don't call yourself by another name, because you'll ruin the moment, and might accidentally wind up summoning Candyman.)  So I'd reverse the order of that To Do list: fuck yourself first -- get the hard part out of the way -- and then reward yourself by settling back with a nice steaming cup of pusscake.  That's how Carol Lawrence did it in those old General Foods International Coffee commercials.

But then one of Marshall's other readers wondered what a "pusscake" is, which reminded me of the time, over at TBogg's place, when George Tierney of Greenville, South Carolina enlivened the American lexicon with his gift of the word "fuckchop."

So it seems like traditional insults are no longer sufficient for our conservative friends, who must resort to assembling complex new compound words in order to paint the room with rage.  Now, I'm no expert on German grammar, so I'm not exactly sure how they go about daisy-chaining these neologisms, but based on the work of Mr. Krough and Mr. Tierney, the perfect rightwing pejorative appears to combine a reference to sex or sexual organs, with some kind of food (I assume "fuckchop" is a noun not verb, like "porkchop."  In fact, those two words are probably synonymous).

The line wasn't moving so I continued to scroll, and saw that Mr. Krough claims to be a Marine, which reminded me how Lou Gossett, Jr.'s drill instructor in An Officer and a Gentleman addressed Richard Gere's Zack Mayo as "Mayo-nnaise," a gibe which seems premised on the same theme (granted, it's not sex+food, but it is condiment+jism).

Then I saw this follow-up tweet, and it all became clear to me...

While it's a regrettable practice that is increasingly proscribed, the fact remains that lower primates are still considered edible in some cultures, which leads me to conclude that what Mr. Krough and his confreres are offering us is not a tasting menu of random insults , but an entire table d'hôte banquet of abuse.  Now again, I'm no caterer, but the way I see it, the fuck monkeys would be served first, as an appetizer (sort of like hush puppies); fuckchops would be the entree; followed by delicious pusscake for dessert.

By the way, many thanks to Thers of Whiskey Fire fame for this (extremely kind) post at Eschaton (and Hi to all the nice new people who dropped by.  If you haven't had a chance, please consider picking up a copy of our book, Better Living Through Bad Movies.  It contains more concentrated snark than you can find at Michelle Malkin's Twitchy, or Glenn Beck's The Blaze, or really any wingnut site that sounds like a slang term for a neurological disorder or an STD).

Also thanks to Thers for pointing out something which bears repeating:  "SZ in particular doesn't get anywhere near the credit she deserves. SZ invented left internet snark in a lot of ways."  I couldn't agree more, and have decided to start a new weekend feature, reposting some of her greatest hits from the early days of Wo'C.  Let me know if you have any requests.
Posted by Scott at 12:12 AM

Email ThisBlogThis!Share to TwitterShare to FacebookShare to Pinterest
Labels: Elevating the Discourse, Smell the Man Musk

I'll have the fuckchop with the au gratin and for dessert, can I get the pusscake to go, please? I'm only in for a quickie.

As you know, I watch a ton of nature programming and as far as I can tell, *all* monkeys are basically fuck monkeys. Ignorant? Not so much. Most of them seem to possess better reasoning skills, self-awareness, and tool-creating and using behavior than most right-wingers.

Welcome new people, please do hang around. The lols are thick on the ground here.

I'm going to suggest this to the caterer to see if they can make some of these dishes for my wedding reception.

All the rightwingers think we keep a list of liberal perversions on the back of our membership cards, but that's just an urban legend. Truth be told, I'm still confused about Lou Gossett's "mayo-nnaise" entendre because I don't know what "nnaise" is supposed to sound like. Nase? Is it a pun on nostril fucking?

Oh, the possibilities of combining food+sexual vulgarities are... marvelous.

Hmmm. Pussy-nuggets, pussy-soup, um- I'm getting a little nauseous (and I had to look up the spelling of nauseous, like always. Yet its spelled the way it sounds).

Personal favorite of mine is Geico's Sarge commercial, in which the term "jackwagon" is thrown at a therapy patient-- by his Drill-Sergeant Therapist. Never fails to make me laugh, that word, and became a catchphrase down at work, used with a laugh whenever anyone complained about anything.

You may have replayed this before, but the one that got me hooked, the Ann Coulter interview.

Oui, I mean, yes, bienvenue to all noubeez.

My request is any of the great SZ posts whose titles I can't recall back when I first came here, or indeed any other of her posts you care to choose. Nobody else's tone is quite like yours, Sheri Babee! Come back to us when you've got the time and the kittehs let you.

I discovered WOC when you unmasked -er- dang it. The gay hooker-reporter at the White House. Them was the days.

Oh, right -- the Jeff Gannon Affair! That was back in February, 2005, when SZ used the investigatory muscles she developed over 15 years in the CIA Office of Counter-intelligence to find out who the hell this man-whore in the White House was, forcing Dana Millbank to go on COUNTERDOWN WITH KEITH OLBERMANN and reluctantly name-check this blog:

MILBANK: Well, that would seem to be the most amazing thing. And in fact, as of Monday, I saw whatever his name is waiting outside there at the White House. In Fact, he would probably be allowed to continue doing this as of now, if there weren‘t some Web site called of all things World O‘Crap that got into all these person allegations. It was Jeff decision or whatever his name‘s decision to step down. He wasn‘t kicked out of the White House at all. So that‘s really where the scandal lies in this whole thing."

Yeah, like Dana fucking Milbank is the last word in propriety.

That was solid win, though.

Not to take away from SZ, whose wit I miss every several times a day I check in here, but is it okay to demand reruns of posts the rest of you brilliant people have done, too? Because, a lot of this stuff is just timeless, and over the years the archives have become rather too large to sift through. So, you know, *you* do it. ;-)