You remember Dean Chambers?  No?  He was the guy who decided all the polls showing Obama leading in the 2012 presidential election were "skewed" by professional skewers who were not able to find regular work transfixing chunks of lamb, chicken, and onion, and had to eke out a living pretending that Mitt Romney wasn't going to win the White House.  Dean's contrarian view of the polling data was welcomed by right wing media as a desperately needed antidote to Nat Silver's math, and they latched onto his conclusions like a horny dachshund with a human shin.  As a result, Chambers enjoyed a life of fame and fortune that had, in my friend Tony's words, "the half-life of a spark." 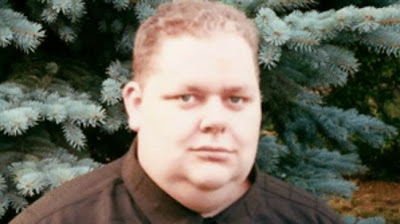 So okay, fine, Dean was completely, publicly, humiliatingly wrong about the polls, but while his math is even worse than mine, his gaydar is so deeply penetrating and infallible that it's like a superpower, and makes me suspect he was was bitten by a radioactive homosexual (this used to happen to me all the time when I lived in Chelsea), or acquired telepathy like the hero of  E.E. "Doc" Smith's Gay Lensman.

Few have forgotten the Newsweek magazine cover from May of 2012 which pronounced Barack Obama“The first gay president.”

I guess I'm one of the few, if not the proud, because I don't actually remember that at all.  In fact, I forgot that Newsweek still exists (does it?), but then Dean himself seems to have forgotten that he previously proved, with geometric logic, that Obama lost the election and therefore isn't President, gay or otherwise.

The feature article in that edition of Newsweek, written by Andrew Sullivan, basically argued that Barack Obama is the first gay president, because his views on gay marriage had evolved from support civil unions but opposing gay marriage (a position that Sullivan compared separate but equal racial discrimination) to his 2012 announcement that he was fully in support of gay marriage. For evolving to that point of view, Sullivan declared Obama the first gay president.

It's rare you find a paragraph, intended for publication and not the kind of thing just scribbled on a Pee-Chee during study hall, that's not only repetitious, but also missing key words.  To be fair, however, we should remember that Dean is a poll de-shish kebabber, and not a journalist.  Wait, let me check his bio...

Dean apparently doesn't want to become Andrew Breitbart himself, he just wants to sit at the switchboard like Carol Your Time-Life Operator and answer the phone, but he does offer a simple 3-Step Program for those many more who hunger to become Andrew Breitbarts:
Number 1 is something I can do in my sleep -- especially when I take Ambien and then decide to stay up and write a post for some reason. Number 2 is something I can easily pull off, as long as there's a spider involved.  Number 3 isn't something I have a lot of experience with, but it's looking more attractive the deeper I get into this article.

I think Sullivan is right, but not for the right reason. I do believe that Barack Obama is in fact our first gay president. But I believe this for entirely different reasons. I believe the man actually is gay. Don't tell me his marriage to Michelle and having two children disproves that he's gay. Remember Jim McGreevey, the former governor of New Jersey, who got himself into some trouble, and then came out of the closet to declare himself a “gay American?” He was married and had children too, but that didn't stop him from being gay either.

Once again, the geometric logic.  There was a documented case of a guy who was married and had kids, and was gay!  Therefore, all men who are married and have kids are gay.  I'm married, but don't have kids, so I'm probably just bi.

There are two sources to the claim of Obama being gay that I believe are credible.

Is one of them your penis?  Or your anus?  I only ask because, as a former history major, I have a preference for primary sources.

Why is there a question mark in that title?  Is Larry asking us if he did all that stuff with Obama?  How are we supposed to know?  I've only been to Chicago twice, and on neither occasion did anyone offer me cocaine, sex, or murder (although I'm pretty sure a guy lied to me about what was in the pupusas they were selling out of that stand in Montrose Field).

Sinclair says it was well known in the Chicago gay community that Barack Obama is gay.

"Public records and court filings reveal that [Sinclair] has a 27-year criminal record, with a specialty in crimes involving deceit. The record includes forgery charges in two states, one of which drew Sinclair a 16-year jail sentence. The Pueblo County, Colo., Sheriff's Office also has an outstanding warrant for Sinclair's arrest for forging an acquaintance's signature and stealing her tax refunds."

"It is what it is," said Sinclair's spokesman, Montgomery Blair Sibley, of his client's criminal record. "He's not hiding from it, he's not denying it."

And not denying that you're a criminal is the same thing as being honest.  But Mr. Sibley might be guilty of shading the truth himself, at least when he appeared with Larry at his press conference in 2008:


[A] kilted lawyer (with a suspended license) named Montgomery Blair Sibley...informed those assembled that his preferences in dress were arrived at as a way to secure comfort for his unusually large sexual organs. "I don't know why men wear pants," he said with a poker face. "It's a function of male genitalia. If you're size normal or smaller, you're probably comfortable with [pants]. ... Those at the other end of the spectrum find them quite confining."

"I asked him to wear a suit and tie," Mr. Sinclair said ruefully. Then, he admitted to suffering from a brain tumor.

Frequent World Net Daily columnist, Dr. Jerome Corsi, has also researched and written on this issue. I believe he is a credible source as well. In this article, titled “Claim: Obama hid 'gay life' to become president,” Corsi documents extensively the claim that Obama is in fact gay.

I dunno, Dean, there seems to be a little too much slack in your tautology.  Nevertheless, Dr. Jerome Corsi is clearly a credible source on Who's Got The Gay?, because he also made this well-documented claim:


In a speech recently posted online, prolific conspiracy theorist Jerome Corsi claims that the gay rights movement will ultimately lead to the legalization of pedophilia, bestiality and “snuff films” in which you “kill a few people because it’s sexually exciting.”

“If sex becomes disassociated from a biblical purpose, than all the abuses we saw in paganism are about to return,” Corsi warns, adding that if the country “proceeds down this path…there will no longer be any basis for freedom in the United States.”

As much as it pains me to admit, Corsi is right. Ever since marriage equality became legal in California, Netflix has been suggesting so many snuff films that they've completely pushed my C. Thomas Howell and Deanna Durbin wishlists to the second page!

Perhaps this answers the question about whether Obama really is a Christian or whether he is a Muslim, as some have claimed and polls show that a minority of American still believe the President Obama is a Muslim. This might well be why Obama actually is a Christian, and at some point chose to become one. Christians don't hate gays; Christians who believe that homosexuality is wrong take the humane approach of loving the sinner and opposing the sin. Muslims, on the other hand, have been known to stone someone for being gay.

Would you be a Muslim if it put you as risk for being killed because of your lifestyle choices?

Hey, you're the guy recruiting people to become Breitbarts, and that's a job with a slightly higher mortality rate than that nitroglycerin-hauling gig in The Wages of Fear.
Posted by Scott at 3:13 AM

Email ThisBlogThis!Share to TwitterShare to FacebookShare to Pinterest
Labels: Elevating the Discourse, Teh Gayz

Dean appears in comments to his post defending his unskewed polls now, and calling people moonbats. It's fun. Wait until he finds out that Obama is also black and running drugs out of Mena, Arkansas.

"I, Mentor of Arisia, am calling upon you because of a crisis in which no lesser force can be of use. You have been informed upon the
matter of Ploor. It is true that Ploor has been destroyed; that the
Ploorans, physically, are no more. And you did a fabulous job taking those bitches out.

You of the Lens, however, already
know dimly that the physical is not the all unless it's Fashion Week on Tellus. Know now that there is a
residuum of non-material malignancy against which all the physical
weapons of all the universes would be completely impotent. You are the Viagra in this equation. That evil
effluvium, intrinsically vicious, is implacably opposed to every basic
concept and idea of your Patrol. It needs more than a bitch-slap. It has been on the move ever since
the destruction of the planet Ploor. Unaided, we of Arisia are not
strong enough to handle it, but the massed and directed force of your
collective mind will be able to destroy it completely. Then we'll party afterwards. If you wish me to do so, I will supervise the work of so directing your mental force as to
encompass the complete destruction of this menace, which I tell you
most solemnly is the last weapon of power with which Boskonia will
be able to threaten Civilization.

Say, ol Dean looks a little light in the loafers himself

Wow. Okay, happy extremely belated birthday to various people, including M. Bouffant, who I know I missed. Apologies. And delight in the reappearance of Tbogg, thank you for the news.

And, I hope Riley gets better. Our older cat Iala has thyroid problems now that require pills and diet and blood tests, but they did decide her liver probably was okay for now. So, yeah, my sympathies, and I still have your address. So either I'll send some cash or I'll stalk you, whichever.

Now, to see if I have to register to say hi to Tbogg.

It is true that Ploor has been destroyed; that the
Ploorans, physically, are no more. And you did a fabulous job taking those bitches out.

I love you guys.

Perhaps this answers the question about whether Obama really is a Christian or whether he is a Muslim, as some have claimed and polls show that a minority of American still believe the President Obama is a Muslim. This might well be why Obama actually is a Christian, and at some point chose to become one.

Whoa--try diagramming THOSE sentences. Mr. Courageous Citizen Journalist might could consider taking a section of freshman composition or something? Maybe?

Thanks, Scott. I'm an old-timer from when s.z. was doing the Spry ads, back in the radioland days. I'm now thinking of doing a Lensman parody, "Old-money Lensman". If I do, it's thanks to this post for the inspiration.