Happy Birthday, Chris V! I Got You a Murder Hat!

Yes, ChrisVmas, that most festive time of year, when we gather 'round the roaring hearth with kith and kin, and get roaring drunk, which never turns out well, and is probably the origin of that old saw, "Don't give gin to your kin, or a fifth to your kith."

As most Crappers know, Chris Vosburg is a veteran and valued member of the community, a source of wisdom and trivia in comments, and an occasional correspondent here on the front page, so naturally we wanted to get him something nice this year, and I think I've found the perfect thing: GOP Homicide Swag!

As you know, Reince Priebus has been stalking me ever since a deliriously romantic one night stand turned bitter when I began to decline his calls and ignore his fundraising appeals. (But I did it for you, Reince, because after what we shared, I thought giving you money would make you feel like a whore.) However, I failed to realize that "whore" is the Chairman's factory standard setting, and rather than sparing him an insult, I was interfering with his business model. So not only is he crouching in my shrubs, he's gotten all his girlfriends to send me shaming emails.


Scott, the Chairman was asking about you

I'm about to step in a meeting with the Chairman to go over our plan for the final three days before the election. And I know he's going to ask me if you have contributed yet.

Well, I contributed to his sperm bank, if you know what I mean.


Scott, can I give him your name as a donor to the Final Election Day Voter Fund?

Look, he's already got my name as a Potential Booty Call if Lindsey Graham is Washing His Hair, and I don't want to clutter up his Rolodex.

Seeing that his Mean Girls weren't getting it done, however, Reince tried to bribe me with baubles:

Just like in sports, when the season is on the line, you put on the gear that shows what team you are on.

Yes, but what if you don't suffer the delusion that you're a member of your favorite professional sports team, and realize that suiting up before the big game will just get you tossed out of the locker room and cited for trespassing?


That's why we are rolling out the GOP's newest product: an American-made, full-zip hoodie. 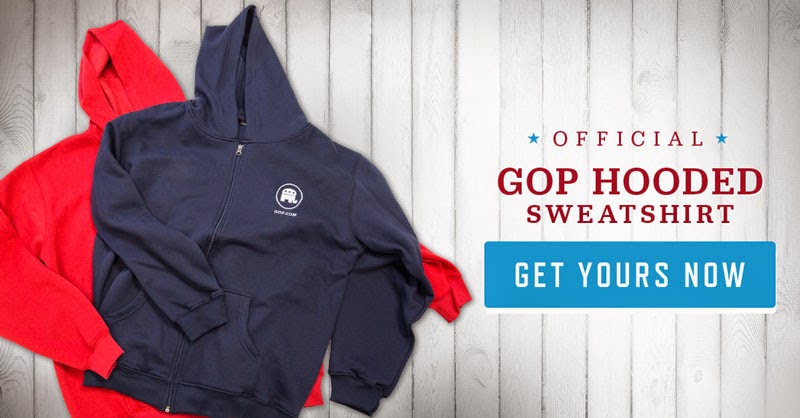 Waiiiiiiit a minute!  Why would Reince entice me to add Thugwear to my trousseau, unless he secretly wants me to get shot by a cop!  Has he really given up on our love, and moved on to the "If I can't have you, nobody can!" stage?

Apparently so, because next he dangled this GOP dunce cap before my dazzled eyes: 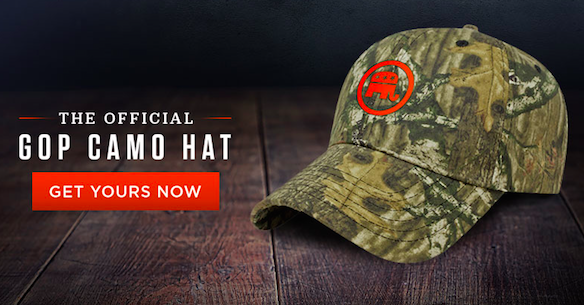 While his email insists this is a "cool Camo hat," I see one problem with it: how am I supposed to seamlessly blend in with my surroundings when I've got a big neon TARGET in the middle of my forehead!? Design flaw, or the Hell-like fury of a Chairman scorned?

So anyway, I'm going into the witness production program until the election is over, because if there's one thing I fear more than death, it's dying as the result of a half-assed, passive-aggressive plot that requires me to pay shipping and handling. But before I go, let's close with a shot of Vosburg approved B-Movie babe Allison Hayes sitting too close to the TV... 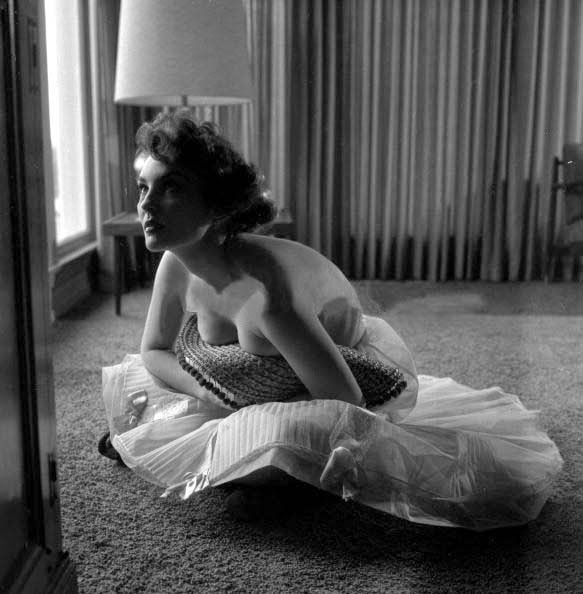 And finally, for our Sexy Birthday Lizard, we have a SBL that's actually a SBL: the Side-Blotched Lizard of Catalina Island, where Chris misspent much of his youth: 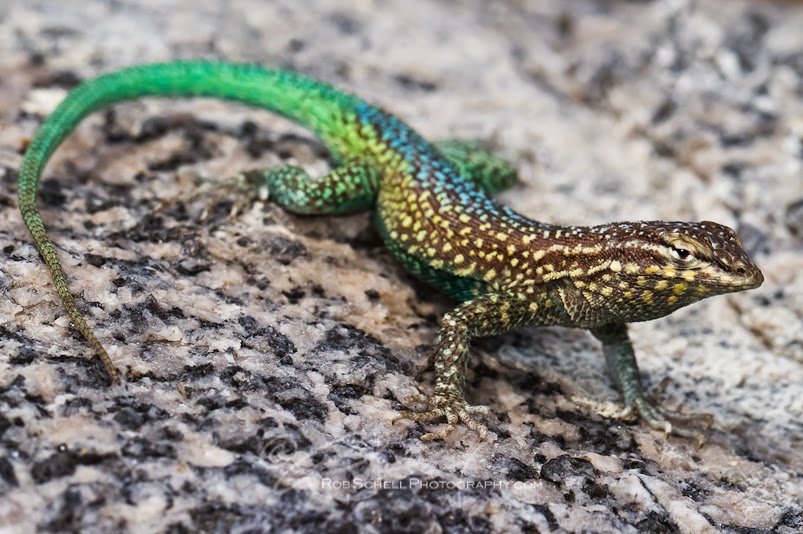 Email ThisBlogThis!Share to TwitterShare to FacebookShare to Pinterest
Labels: Birthdays, We Get Letters

One would think the RNC would have people who could do better Photoshops than that.

One would think wrong.

Yesterday morning I discovered that I share my birthday with the only known member of the species Felis LittleGirlius.

That'd be Hello Kitty, who celebrated her fortieth with friends at the first ever HelloKittyCon, here in Los Angeles.

Needless to say, I'm honored to be in such distinguished company.

Thanks for the Birthday greets, Scott, and for wising me up to the existence of Catalina's very own Side-Blotched Lizards, who knew?

Oh, and the Chairman wants to know if he should maybe send over a coupla guys to help yiz find your checkbook.

and Scott- wouldn't the red throw off the laser sighting? ;}

also I think that pic of Allison is from an early vintage mammogram ;}

Happy birthday, Chris V.! Too whacked out from a 3-day drive up to Yankeeland to even begin to think of anything else to say, but all the best in this coming year.

Chris V, first I flub the Chairman's bday, now yours. Well, to err is hooman, to forgive feline, so I hope you'll call upon your inner Kitty -- I know you've got an inner Kitty, there's no point in being modest -- and overlook my lapse. Happy Birthday, and I do think it's pretty nifty of you to have been born on Dia de los Muertos (or on New Year's Day Very Old European Style, whichever way you wanna look at it).

Scott, if I were you I'd take out a restraining order on those slavering Republicans ASAP. First Reince wanted your loyalty, now he wants to clothe you. You know what they call a fellow who permits a political party tempt him with wardrobe items? I don't want to go into it. Suffice it to say that it can't end well!

I, for one, would never call you a pussy, correlation to Hello Kitty notwithstanding. And in honor of your birthday,I will her too close to the teevee, also too. No other reason.

HeyDave, haven't you seen the recent "news" (tells you the state of "journalism" these days, eh?) that Hello Kitty isn't actually supposed to be a CAT, but a "LITTLE GIRL WHO LOOKS/DRESSES LIKE A CAT"?!??!?

So pairing Vosburg with Hello Kitty doesn't so much make him a big pink-and-white pussy as it connects him to some severely-schizophrenic girl who THINKS THAT SHE'S A CAT.

Yeah, I think that we know where the still-extant radiation poisoning from those WWII bombs are polluting Japanese aquifers, eh?

At any rate, better late than never --- Happy Birfday, Vosburg! Hope that you're feeling old as hell, 'cause Halloween surely kicked MY ass this year! Might as well share the misery, eh?

And, of course, the obligatory & always-sincerely-meant:

Hope that you're not TOO hungover and that you severely-enjoyed your magical natal anniversary!

Li'l, I like to think of it as November Fools Day.

My Mom always, when noting that I was born a few minutes after midnight, says, "I was making popcorn balls the night you were born!" and then she laughs and laughs, which always makes me knit my brow and demand WUT WUT WUT? WUT IS SO FUNNY? COME ON, MA, WHAT'S THE GAG, LET ME IN ON IT, HUH? WUHHHHHHHHHT? which just makes her laugh all the harder.

Thanks to all, for being all y'all.

That *is* a head-knocker... Let's all just hope that "popcorn" wasn't a sexual code-word for your parents, Vosburg, 'cause the alternatives could be permanently-scarring on ALL of us, kiddo...

Teh Fallen Uterus (formerly known as Teh Beastmaster, a title & cred that she lost when she became TOTALLY Dick-Whipped to a froth upon his retirement --- yup, too much fucking exposition, I know, sue me --- beats playing "couples counselor" for James & his new gay paramour Yoda!) --- HERSELF has ALWAYS bitched that *I* was a "ten-month baby," which wouldn't surprise me in the least.

After all, if YOU could hear THE UTTERLY-ILLITERATE, BATSHIT-CRAZY RAVINGS OF DRUNKARD & PSYCHO-CUNT from the relative safety of that union-hall-sized WOMB --- wouldn't YOU brace your feet on either side of that pelvis and REFUSE to come out?!?!?!

Best to you & all of Kitty's products.

I got you a moth-eaten mink, by the way.