I always hated this game, although in the past my objections were purely aesthetic. This time...it's personal. 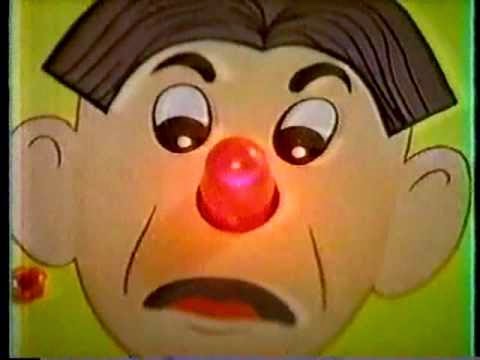 My sister and I actually had and played Operation (because there were only seven TV stations -- eight if you count UHF channel 52 which showed Speed Racer and Gigantor, but successfully tuning it in required a lot of minute and frequent adjustments to the rabbit ears -- and we had to do something until As The World Turns was over) but I never really enjoyed it. I'm naturally anxious, so I lack a steady hand, and that buzzer (which alway sounded in my head like a scream) just sawed through my nerves like a blunt electric knife. On the other hand, with the success of Ouija at the box office, this might be an opportune time to pitch my take on Operation as a new torture porn horror franchise ("Helpless man is dismembered alive by snotty children").  I imagine the trailer climaxing with a great, chilling image: an eight-year old girl shows the victim his own femur while mirthlessly intoning, "Ha. Ha. Ha."

Anyway, remember yesterday, when I said it hasn't been a good week and is about to get worse? Here's where I make good on that promise...

Mary has been suffering from a variety pack of health problems, which seem lately to be increasing in severity and decreasing in manageability (although her degree of Fahrvergnügen appears to have stabilized) and tomorrow she's going in for major surgery. How major will depend on what they find (apparently it's part surgical procedure, part scavenger hunt) and naturally she's nervous about it, as am I. Hell, even Moondoggie has lost his usual sang froid and is clinging to her lap like an insecure lamprey.

So any good thoughts and well wishes you can send her way would be much appreciated.  I'll try to update this post tomorrow, once I know anything.
Posted by Scott at 1:10 PM

Mary, I hope all goes well tomorrow, and you feel better soon. I also hope the procedure isn't too stressful and uncomfortable, and the time passes quickly until it's all done and they give you the good news that they know how to fix everything that ails you. I'd send you a kitten photo to cheer you up, but I can't here, so I'll send one via twitter.

Mary! Here's hoping you look back on all this soon as just an annoyance in otherwise fun filled days!

Oh fuckity-fuck! Exploratory surgery yet. All I can say is enjoy lying down & having people wait on you for a while as much as possible.

Buckets of good wishes. Also, if you need anything this weekend (errands run, etc) do not hesitate to ask.

Dear Mary and Scott, I'll be thinking about you all day. I know from experience that the whole business is not exactly a trip to the south of France, so this is what I wish for you:
- what Sheri said, couldn't be said better
- that everything goes nicely on schedule and Mary won't have to hang in the boredom of pre-op, but I suggest bringing a good book just in case
- that the doctors and nurses are totally cool cats and chicks with bedside grooviness and smarts like Geo. Clooney in ER
- that they let Mary get up as soon as she wants to, and go home expeditiously too
- that Mary's roomies, if any, are nice, and her bathroom is salubrious
- that there's some kind of view out the window
- that the place smells as pleasant as a hospital can be expected to smell
- that Mary gets acceptable nights' sleeps and can eat solid food *soon* afterward
- and what heydave said, too

We're all with you in spirit, guys. And Moondoggie, too, who should be getting some extra petting from dad. We would all catapult our ear-scratchings thru the internet to soothe him if we could, and that goes double for you humans.

Mary and Scott, you know that all our best thoughts and wishes are with you.

If you need anything (from me, by long distance) please don't hesitate to ask.

There's nothing I can add to what all the great people here have already said, other than to add Mizzus Marxist's and my best wishes to the rest. Take care, the both of you.

Hoping for laproscopic for Mary as it is much easier to recover from. Count on me to contribute a few bucks if you need it.

Moondoggie is just doing his bit to calm his "mom". I was in a potentially serious accident (not my fault) on the DC beltway many years ago (less serious because of light traffic due to another serious accident on the beltway upstream). It still involved 5 cars and my car was totaled. My cat who wasn't a real lap cat was in my lap or next to me for days because I was so freaked out. It did help

Thanks for the well wishes, everyone. Right now, I'm not so nervous as I am HUNGRY. 24 hour clear liquid fast. And yes, I had Jello, today.

Cranny, I wish it was laproscopic, unfortunately its a good, old fashioned, hugely invasive procedure.

And I think Moondoggie is trying to comfort me. He's gonna be a basket-case for the next couple of days, though.

Oh no, Scott! Mary! I hope all goes well and turns out well! My thoughts will be with you both. And Moondoggie, of course. I'll make sure ThumbPer knows, altho I suspect they tweet each other.

Ouch! I just read this and hope everything went well. I hope they found an obvious problem that was resolved with trivial ease, and I further hope that Mary's on the mend, with great pain management.

Mary, fingers crossed added to positive vibes sent to you.

Hoping that all goes well, that you recover reasonably quickly and comfortably, and that it ends up helping with your long-term problems.

Later and later and later every damned time, I am so sorry, y'all. You two bipeds and Moondoggie are some of my most-favorite living creatures on what's left of this miserable excuse for a planet, and it skeers the shit outta me to not be there to do anything to help, to not have shit to send, to not be there to comfort poor Moondoggie, who's been through such a shitty year for one big ol' ginger sweetie...

Whatever it is, anything that y'all need, please PLEASE call, text, e-mail, carrier pigeon, smoke signal, whatever works. I'd come over there and take the cuts for Mary if I could. Honestly. Nobody should have to go through so much pain, especially not a woman who is one of my near & dear heroines, whom I admire so much and for so long. If the cutters would let me, I'd take any surgery for either of y'all, any fucking time. I'm a veteran, I know how to get through it and get the fuck out as expeditiously as possible.

Mary, darling heart, please be okay. You are very, very needed, just in case you haven't seen that from all of the other messages already. Not just 'cause we know that Scott would go apeshit without you, and he bitches enough as it is (takes one to know one!), and because Moondoggie needs you both so much, though those are humongously vital reasons for you to continue on your current path on this planet. We ALL need you, and we need you to be healthy and happy and not constantly sideswiped by medical bills & other hells, let along losing your little girl right before THIS shit hit.

If there were any justice in the world, neither you nor Scott would ever hurt again, nor any Crappers or our feline/canine/avian/reptilian/etc. overlords, and anybody/anything that ever tried to harm any of our beloveds would have to answer to ME. I ain't good for much, but I could stomp the fuck out of whatever it is that's sending you through this hell!!!

Sending y'all all of my love, which you already had, but hopefully able to launch an extra helping through teh innernet toobs.