I Sound My Mighty Yelp

I was so delighted and inspired by Sheri's piece on Wo'C favorite Robin of Berkeley that I just had to pluck a fruit from the poisoned tree and take a big crunchy bite of it myself. And then Weird Dave, one of our favorite, and certainly one of our nudest Crappers, wrote in comments, "Before we bid Ms. bin Berkeley adieu check out her complaining about Yelp.  I will bet dollars to doughnuts she got a bad Yelp review (or three)." And if you know me, you know how difficult I find it to ignore the advice of a man who spends most of his time frolicking naked in the desert. So I followed his link, and sure enough, Robin is as upset by this crowdsourced Consumer Reports as she is by the Andrew Breitbart murder, or Rosemary's Baby (but happily she's still proud of her whiteness):

They just jump straight to their safe word.


Everyone is Yelping these days, that is, using the website, Yelp, to play critic. But in my opinion, the name “Yelp,” is a misnomer. Instead, it should be called “Whine.”

That'd be great, Robin; unfortunately, "Whine" has already been reserved as a synonym for "Blogging."


Because that’s what most people do on Yelp, complaining about this restaurant or that physician’s office. As a bumper sticker I saw aptly put it, “Yelp. Ruining small businesses since 2004.”

Well far be it from me to refute the peer-reviewed conclusions of a bumper sticker, but the only time I ever wrote a Yelp review, it was a rave for the Mom 'n' Pop computer cobblers who resurrected my wizened Mac after the harddrive died.  Now I realize my experience is completely anecdotal, and lacks the large data sample and rigorous statistical analysis typically performed by the rear collision guard of your Kia Elantra, but according to this site designed to help local merchants leverage social media, Yelp users most often come to praise Little Caeser's, not to bury it: 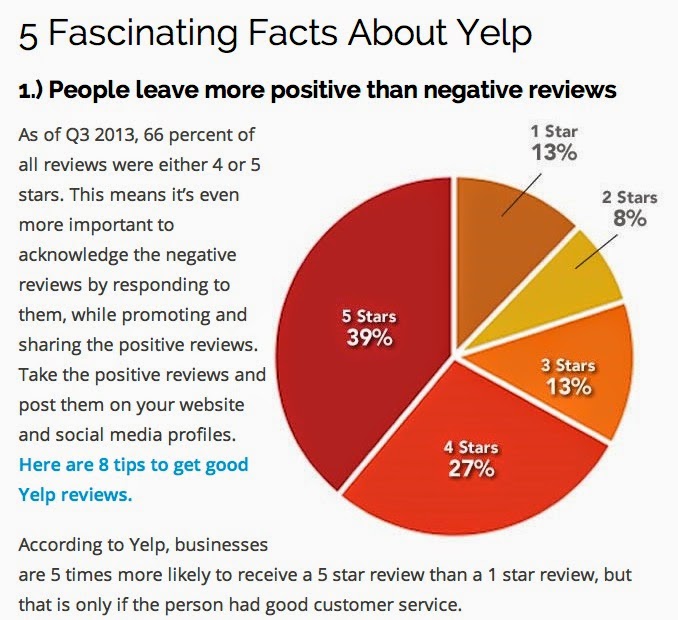 Take “Becky from Oakland.” She ordered her burger from the local bistro medium rare, but it came well done. Did she politely speak to the waiter? Complain to the manager? Try to work things out like, I don’t know. . . a grown up?

No, Becky typed out an incendiary attack against the restaurant and posted it on Yelp. In that moment, as Becky seeks revenge for her disappointing dinner, the restaurant owner isn’t a person like her, someone with dreams and feelings. He is just a vehicle for her to unload frustration and bitterness.

Unfortunately, Robin didn't link to Becky from Oakland's review because we can't handle the truth!, so we don't know if she did try speaking to the waiter or the manager, or just sullenly accepted the cremains of her burger and placed it in a tasteful urn next to Aunt Sadie's ashes on the mantle. And since a search of Yelp for "Becky from Oakland" yields no reviews at all, positive or negative, it's possible Becky is another one of Robin's imaginary enemies. Or one of her patients. But I repeat myself.

Yelp plays to basest instincts for vengeance, imparting a false sense of power and bravado. In that online moment, Becky becomes a mini, online Rambo.

Then there’s Jim. He didn’t like the attitude of the person at the local dry cleaners so decided not to use them. Rather than simply bringing his garments to another shop, he gave the place (which, by the way, he never actually used) a nasty review and one star. In the age of Yelp, business owners can’t be in a bad mood because of a troubled marriage or a sickly child. Every potential customer is now a Secret Shopper, scrutinizing all possible wrong moves.

It doesn't seem to dawn on Robin that people actually read the reviews on Yelp, and if "Jim" says "The dry cleaner was all pouty about his kid's lymphoma, so I refused to let him touch my fine washables. One star!", then users will probably accord his opinion the weight it deserves. On the other hand, I find Robin's stubborn belief that everyone is as stupid as she is -- in spite of all evidence to the contrary -- a touching act of faith.

I suppose Yelp isn’t all that different from many sites on online, with the trolls and the hostile, sometimes obscene, comments.

Back on the Old Wo'C Site, Sheri quoted Robin on the mystifying, nay, suicidal effrontery of trolls.  "Why," Robin puzzled, "Would they subject themselves to scrutiny by a licensed psychotherapist?", to which Sheri responded, "Robin, you routinely diagnose mental illness in the Left while being a nut yourself. You’re a humorless, tone-deaf scold. And you tell the most far-fetched, improbable, entertaining stories about the trials and tribulations of being you. Of COURSE the trolls are going to be drawn to you. You’re their queen!"

Virtually, people can brandish words like knives to attack anyone who dares to disagree. It’s all anonymous, of course; one can say things that would never be allowed in polite conversation. And the recipient of the abuse isn’t a quite a person, but an objectified, disembodied thing, someone different than oneself.

Robin of Berkeley would like you assholes to stop insulting people from behind your curtain of anonymity.

Maybe I’m touchier about the subject than others. My father owned a very small store post-WWII, when leases were easy to get and red tape nil.

Before the days of intrusive government regulations, our father's were free to run their wildcat organ harvesting business out of the neighbor's toolshed!


Because ultimately, it’s not about burgers and fries or dry cleaners; it’s about something deeper and more essential: dignity, and a culture bereft of it. No longer do we treat each other with basic dignity. The business owner isn’t someone’s father or mother, not a person trying to carve out his little piece of the American dream. No, the other is an obstacle in our way, a barrier to our achieving our own perceived rights and privileges.

So what if he poured sawdust into the drive train and then charged you for a new transmission -- he might be somebody's dad for all he knows!


I propose something radically different, something that harks back to a bygone era, that is, the one prior to the creation of the World Wide Web. How about if someone has a problem with someone else, that he speaks to them? If Becky doesn’t like her burger, she should send it back. Speak to the manager, if necessary. Worst comes to worst, she can order something else from the menu.

By preemptively posting a bad review on Yelp, Becky will never know if the manager would have preferred -- given the opportunity -- to address her complaint in a more personal way, by making her a new burger and spitting on it.


How about if everyone stops Yelping and Whining, and returns to talking to each other with basic respect. We’re all in this human soup together.

Okay, although I prefer to think of it as Homo Bisque.


In my opinion, real men (and women) don’t Yelp. And real human beings don’t seek revenge on each other, by trying to destroy reputations and businesses on impulse.

I think Dave is right, and a few well-placed consumer complaints to the California Board of Behavioral Sciences (I'm lookin' at you, Chris Vosburg), may explain why Robin no longer identifies herself as a "licensed psychotherapist."


Real people see that we are all connected in some mystical way that none of us can really understand.

Yes, there's few things more mystical in this veil of tears than the ethereal bonds between "fraud" and "gullibility," or "carnies" and "rubes."
Posted by Scott at 1:40 AM

Sooooooo....basically her entire column is one long Yelp review about....Yelp?

I cannot understand how I'm connected to Robin. Or why.
~

That dry cleaner deserved it.

If you haven't read 'Yelping with Cormac', you've been missing out.

I have x-ray vision for pathology, and can diagnose with the best of them.

I have no trouble at all imagining a fully qualified PhD Psychotherapist uttering these words. At the faculty Christmas party. Either right before or right after donning the lamnpshade. Probably after, come to think of it. Lends the utterance the extra gravitas it needs. There would be a raised finger, and a teensy bit of gin sloshed from the glass in the other hand...

Like the negative reviews at many other sites (or negative ebay feedback) a great many of those 1 & 2 star screedlets can be safely ignored. The dry cleaners one is a good example. Now, if you wanna write a bad review, THIS is how you do it. That thing is gonna be an intertoobular classic forever...

Robin's thin skin re criticism of any kind is well-documented, as seen in her decision to disable comments at her blog. What a pity, because as Robin writes in a post from a few weeks back:

Every day I get a bunch more people registering for my blog. [Dozens! No, Hundreds!-- ed] Even though I’ve gone through long periods without writing, even though my blog is as bare bones as you can get, still I keep getting new registrants. It makes me wonder, “Who are all of you?”

Who, indeed. And then the part I like best:

Of course, I could find out more if I posted comments

And we know that ain't gonna happen. Really, I don't know why she doesn't simply invent commenters for herself and write their comments, like she does with all of her described interactions with other humans.

Something I am actually curious about is since Robin claims to hate Berkeley so much why does she stay there?
Somehow I think there is much more to her story than she has let on to.

Oh, and Mr. tickle a person (www.fakeassurl.com indeed) that was a funny review.

Meanie, my brother was fired (unfairly) from the company that makes Veet so of course I had to send him that link