Movies So Bad Even Shatner Helps

In other words, the whole thing goes horribly, horribly wrong, and it's all our fault.

Why? How? It all started innocently enough...Jeff and I had both seen cinematic acid reflux Independence Day: Resurgence and slow motion bikini wax The Neon Demon and decided to chat about them at the top of the show, because that's everyone's dream double feature. Right? 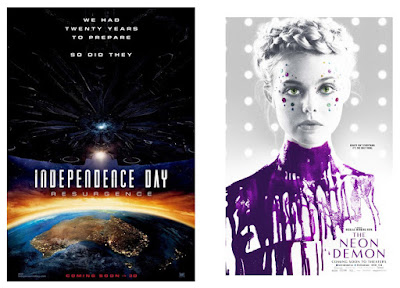 It goes about as well as you'd expect.

Actually...no. It goes worse than you'd expect. Much worse, because we manage to destroy the entire podcast timeline, and can only restore it with an elaborate flashback sequence that I hoped would feature a cameo appearance by The Flash but apparently he was booked. Still, there's a nice harp glissando.

Then it's time for the Unknown Movie Challenge, and this episode we decided to take on two moldy cheese wedges from the Eighties: 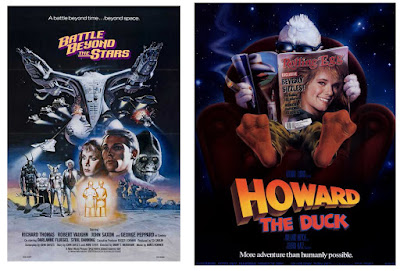 A John Sayles written, Roger Corman ghost-directed rip-off of the Seven Samurai rip-off Magnificent Seven -- that should be fun, right? But wait! What if we paired that with a beloved comic book from the 1970s, the creative vision of post-Star Wars but pre-Prequels George Lucas, and the first big screen appearance of a used duck condom?

Here's where our little rocket sled really goes off the rails, and if you have even an ounce of schadenfreude and sadism in your soul, you'll enjoy watching us spin like a Blooming Ground Flower across the Bonneville Salt Flats. So please give it a listen:

UPDATE: Speaking of audio entertainment...Our friend, film writer Jim Donahue guested on As If, which has one of the most -- shall we say "unique"? -- podcasting formats I've ever heard (let me just steal the description of it from his blog):


I'm appearing in five episodes of the As If podcast--a minute-by-minute look at Clueless, Amy Heckerling's 1995 updated, comedic take on Jane Austen's Emma. (In addition to that link, by the way, the show is also available via iTunes.) I'll be a guest for episodes devoted to minutes 53 through 57, and the first of our episodes went up today--the others go up Tuesday through Friday. If you're wondering if Clueless holds up: Yes, it does, and we had a lot of fun talking about it. Host for the episode is Dan Costa (who has his own podcast, Blockbuster Dropouts) and fellow guest is Wendy Mays (who hosts the Pet Cinematary podcast). (I take it that I'm now the only person on Earth without his own podcast.) So tune in for fun and prizes! (Note: The prize is free entertainment!)

I am loving these podcasts. Always fun to hear people who are both knowledgeable about movies and damned funny.

The suggestions for an appropriate voice for Howard the Duck were good, but my choice would be Eddie Pepitone.

I have a confession to make. When I was a young man, two friends and me did a proto-MSTing of "Battle Beyond The Stars" during its initial theatrical run. This is the sort of behavior that merits ejection from the theater at minimum, a deserved ass kicking at maximum, yet we were allowed to continue. I'm guessing the other theater patrons appreciated SOMEBODY making an effort to be entertaining.

And thanks very much for the kind words.

You realize that from this point on, I will never be able to see Zed's starship without thinking of a certain NSWF simile? Put a protector on that thing ....

"Howard the Duck," that brings back memories. Let me suck on this Zofran tablet to calm my stomach.

There. Back in the mid-eighties, you could watch midnight movies for three bucks at this one little theater. They sometimes hit a homerun with a film that didn't get the recognition it deserved on first outing, like "Blade Runner." But one time it was "Howard the Duck" and for months we mentioned it only in whispers as "Who Writes This Dreck"? You could not pay me enough to watch it again, or even listen to two amusing people talk about it.

Terrible, terrible film. Do not watch it unless you've had your rabies vaccine.