First, I'd like to thank everyone again for the many kind donations to the WO'C Beg-a-Thon -- you guys made it possible for us to survive a very ugly and desperate time, and we're sincerely grateful.

But while most every cent went for debt service, after the hospital and vet bills were paid we did put aside a little money to buy a Christmas present for the cats.  So in the spirit of those "Your Tax Dollars at Work" signs that are always posted alongside a public works project, and are supposed to make you feel better about creeping along at five miles per hour until the flagman waves you past the orange cones, here's where a fraction of your generosity went: 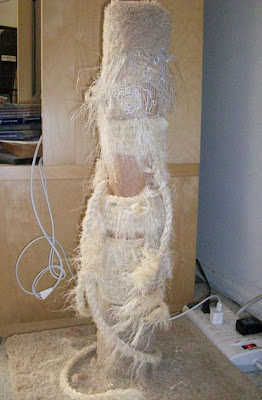 Just in case you've ever wondered why, in every murder in which mutilation plays a part -- from Jack the Ripper to the Black Dahlia -- the first suspect is always a cat. 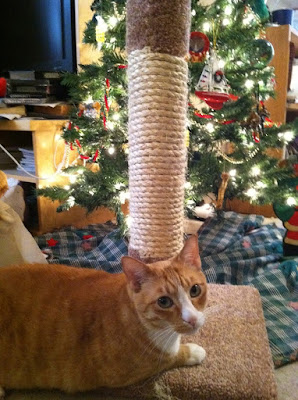 Wo'C Staffer Keith also went all out this year, as seen below, in his brief, Linus-like essay on the true meaning of Christmas.

Santa can tell you, every boy and girl wants a nice, plush, cuddly eight-foot snake under their tree. I copped one. 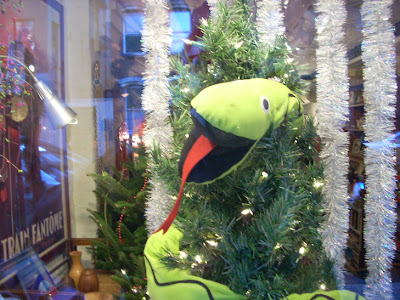 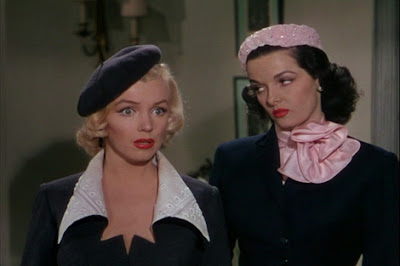 Dorothy: Were you doing anything you wouldn't want Mr. Esmond to see?

Lorelei: He was telling me about South Africa. lt's dangerous. Full of snakes called pythons. lt seems a python can grab a goat ... and kill it by squeezing it to death.

Dorothy: Get to the point.

Dorothy: What's incriminating about that?

Lorelei: Well, Piggie was being the python, and l was a goat. 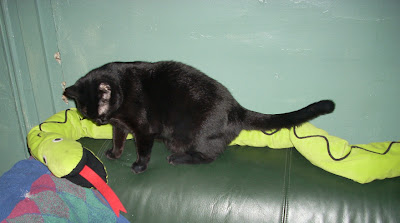 I love Moondoggie's look of incredulity (I realize that is his standard look).
~

I thought with the big snake there'd be a scene from "All About Eve."

I wish I had pictures of some of the damage Maxine and Yuki could inflict on a piece of furniture. They took an upholstered chair down to the bones in about six months. After I had them declawed, they ripped the cover fabric off the bottom of the box spring as if to mock me.

Love your blog, your kitties, and your commenters! Have a Happy New Year! And don't burn out on the surfeit of blog material that's in store for us this year.

I so hope the cash we sent went to the cat toys. I mean, bills, so boring.

To Keith: I adore your cat. I have one like that but without hip bones, so you'd be amazed the trouble she can get into. Hey, she can also, I swear, detach her jaw, which I think makes her a snake herself.

Thank you for the cat pics. I'm starting the new year with a migraine, but also with cats. I hope to establish a bad-luck floor for the year.

FYI, for you FYI'ers... which might make you a Wo'CFYI type to be specific... a trip to the hardware store and some time (and space and tools) gets you some rope to do a re-wrapping of such things. They become so much fun to make that you find you need/want several in the house!

In any case, Happy New Year!

wv: tuder... as in, my next cat post will be tuder style, real elegant!

My cat won't touch his rope scratching post. I set him down next to it, put his paw up on the rope,and he just gazes out the window. Peanut liked to use the sisal (rope) entryway rug as Her scratcher, but Chester... he likes the sofa. And Grandma's chair. And everyday rug. But scratching posts: nope. The wild kitties in my garage, however, adore the scratching posts and cat toys Chester disdains.

I am having the same problem. We just got that damn green naugahide sofa, and even thought it is second-hand, it is so much less nasty that what it replaced. But Midnight doesn't like her burlap post either. She wants to go for the hi-fi speakers or the couch. Or my new mattress. Is there something other than catnip we can apply to the scratch post? Catnip sends this cat into outer space. I'm afraid.

Valerian root or honeysuckle bark. You can get spray honeysuckle scent, which might or might not do it for your cat. Otherwise, hit a health food place, get some powdered valerian root capsules. Pull one apart and sprinkle a very small amount on the post and then rub it in. I find about a fifth of a capsule is plenty. You don't want her lapping it up, just enjoying the scent.

Mine, for the record, mostly get the empty bottles after I've finished the pills, and they will cuddle with them and knock them around for days.

Catnip tends to make some cats possessive and hissy and grabby-sharp. I've never seen that happen with honeysuckle, but only about ten percent of cats seem to actually go for it anyway. Mine will swat at each other, sometimes, with valerian, but only if one of them is actually provoking the other (tail pouncing, getting WAY too close). But mine barely tolerate each other to begin with.

Thanks for the advice. I tried valerian root once as an alternative sleep aid, but all it did was give me weird nightmares. But I will try it with the scratching post. Also honeysuckle, but not both at once. Not good to mix substances. I'll let you know how effective it is. --keith

Most kittehs, in my weird experiences, don't really jive with catnip until they're 3 or so years old, something to do with a little gland in their brains/sinuses/somewhere thereabouts having to mature, I think.

Never tried valerian root for their amusement --- my two are --- sorry, were so lethargic when not capturing chipmunks and/or Florida lizards, that valerian root seemed like the last thing that THOSE big posh "fluffy" (to put it kindly) kittehs needed was MORE incentive to sleep.

I will tell you the BEST catnip we've ever found, though, short of HUMAN "catnip," --- DOLLAR TREE. I shit y'all not. It used to be a turquoise-trimmed clear-plastic envelope, now it's a pink-trimmed clear-plastic zipper envelope/baglet container, same structure, just a different color. Can't rightly call the name, but if you have a Dollar Tree nearby, it's the only kind that they sell. We've used every brand @ Wally World, Dollar General and even the posh stuff @ PetSmart, and lemme tellya, this U.S.A.-grown-and-packaged stuff from Dollar Tree (probably the ONLY thing in those stores that's EVER been made in this country!), that's about 3 or 4 ounces for a buck --- SWEEEEET BUD, MAN!!!

Srsly. None of that yard-clipping crap you usually get, looks like shake and literal dried St. Augustine shreds, only no seeds to make tea --- THIS stuff is PURE BUD, and if it were weed, it would be FORTY BUCKS FOR A DIMEBAG!!!

Damnnnn, I miss weed. Best sleeping aid EVER, also the perfect female viagra, I might add, when I had somebody upon whom to take those urges out upon and my lungs hadn't gotten sarcoidosis yet.

Anyway, I highly recommend the Dollar Tree kitteh weed for all kittehs, and melantonin and/or generic NyQuil capsules for insomnia, where good bud is unavailable or impractical. Ohhh, the seed tea that I used to make... *sigh* Don't mind me, I'll just be reminiscing, all melancholy and chewing on my nappy hair in the corner...