This Is The Least Creepy Thing On Hollywood Boulevard... 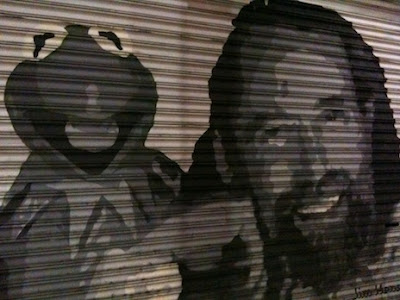 Oh, for long-gone days of pure and subversive Muppets, with their proper voices and NO fucking Disneyfication that utterly destroyed everything that was best about the Muppets --- they weren't "mainstream," they weren't A THEME PARK, and they didn't rely upon DATED, RACIST, SEXIST, RECIDIVIST NAZI-SYMPATHIZER BULLSHIT TO KEEP THE PIECES OF SILVER ROLLING IN...

*sigh* I fucking LOVE this painting, Scott. Have you posted it before? Because I know that I've seen it before SOMEwhere. Jim Henson was such a subversive genius, he caused and encouraged social change decades ahead of the "mainstreaming" of "minorities" by race, sexual orientation, ability/disability, family construct or foster care, etc., and HE WENT STRAIGHT TO THE CHILDREN WITH IT!!! How better to change the world, than by trying to connect children in cities and shit-holes in the sticks, all around the world, to show them that they CAN make a difference, even if it's only on their block, that NO effort is wasted in trying to do good.

Yeah, I know, I've got proof to the contrary of that last statement, but for the Sesame Street/Children's Workshop, The Muppet Shop and Henson's Creature Shop (before fucking LUCAS bought it and then SOLD IT TO SONY, WHO SOLD IT TO DISNEY!!), the effects were REAL. The enlightenment of children the world over was real. And every single furry little critter that he built, in its own way, was real, too.

Why, yes, there HAS been a change in my multi-purpose, multi-colored drug line-up AND I HAVE been awake for far too long tonight/this morning. Is it getting THAT obvious?

I can't remember when I took this, Annti, but I know it was several years ago, so I might have posted it in some previous Random Scenes of Hollywood thread.

And yeah, selling the Muppets to Disney was like General Motors buying the Water Engine.

Ackshually, it was more like "Pretty Baby," y'know? Whoring-out the rare good things from the '70s and our childhoods?

And you could re-run this picture whenever you wanted, as far as I'm concerned, especially if you ever find out who the artist was who made this lovely tribute.

Don't be too hard on Henson's kids, Annti, the deal with Disney was in the works with full approval from Jim before his death in 1990.

Hard to believe, isn't it, that Jim Henson died over twenty years ago, because his legacy and his puppet progeny are still so very present in our lives. Jim died of Pneumonia at the age of 53, and in retrospect it would appear that he literally worked himself to death.

The art of puppetry was all but dead when Henson redefined it back in the fifties while a college student at the University of Maryland, and there is on the campus there a Henson Memorial Garden, featuring bronze statuary of Jim and Kermit chatting on a park bench. Room is left on the bench for anyone wishing to participate in the conversation.

Meanwhile, back in Hollywood, Henson has a star on the boulevard near the storefront security gate mural Scott snapped a pic of (I think it's just west of Highland). Kermit has one as well, which I think makes him the only amphibian to have one.

The Jim Henson Studios are just around the corner on La Brea, and the good work continues in the hands of his offspring.

Rats. I embedded a link to a very nice mention of the Henson and Kermit statuary, but it didn't take, so I'll try again.

Thanks for the link, Chris. That's a very sweet story.

I love those 15 second Wilkins Coffee commercials Henson did back in the 1950s. They're funny and astonishingly brutal, with Proto-Kermit shooting another puppet in the face, for the crime of simply failing to show sufficient enthusiasm for a regional brand of instant coffee.

Oh the puppetry! Here's a link to a few of these Wilkins Coffee commercials the Henson Company uploaded to youtube.

Vosburg, I love ye dearly for the archival wisdom of linkdom, but I still don't believe that Jim was in any way happy about or agreed to any such unholy juncture/absorption.

I'll never forget the day that Henson died, I heard it on the radio on the way home from yet another wasted day @ the U.S.'s biggest party school; same day as Sammy Davis, Jr. died. Helluvan exit, those two. Cried all the fucking way home.

And then not finding out until this morning, en route the world's most excruciating spinal-cord frying-with-radioactive-dyes through 8-bore needles --- that I'd not heard a fucking PEEP, all weekend, from the republicunt TOOLS who call themselves "journalists" in this shattered remnant of a carpetbagger's town that MUHAMMAD ALI HAD DIED. Helluva note. Who's next? Judi Dench? Fuck. Fuck fuck fuckity fuck fuck. Or, in the sports vein, we've already lost Arthur Ashe, maybe fate and the apathetic universe will take Billie Jean King.

Google disputes what I heard on either Tom Joyner or Steve Harvey's slack-ass radio "shows" this morning, all saying that he is home safely from the hospital after a "health scare," but considering that their most-recent quotes are from Saturday morning, I dunno what to think.

Even though I don't often speak of childhood heroes, aside from Henson, Ali has always been one, because he was never once bowed, he was never once a "Tom;" humble, yes, but bashful? He never heard the world. One of the 6 good things to come out of Kentucky, I hope to hell that he, unlike Hunter, is still amongst us.

Much as I'd love to let you have the last word, annti, I can't quite let that go:

Sadly, the aftermath of Jim's death tells the true story: his heirs fought like hell against Disney to prevent the consummation of the deal that Jim was making with them (and was about to sign the week he died), and told Disney to fuck off.

Look, it makes me sad, same as you, but the simple truth of it is that Jim didn't have a problem with Disney, and was glad to sell.

Whether Jim envisioned the full fruition of the Muppet Theme Park-- well, we could dig him up I guess and look for evidence of spinning.

And here as always, is a link: this one to the complicated and many-corporated history of the Henson Company since Jim's death.

If you're like me, your head will spin after reading the story of the hands that create, and the powers that be. In a sense this is the story of Hollywood and moviemaking in general, writ small.