Not So Cold Case

You may remember the shooting that took place in the streets of Hollywood on December 9th.  It occurred fairly close to our home, although the gunfire we heard that day came not from a jilted loon attempting to commit suicide-by-cop, but from the nearby set of Gangster Squad.  Nevertheless, our roving correspondent Chris Vosburg was nearly an eyewitness, and only escaped being in the wrong place at the wrong time because he couldn't resist taking in the 10 AM rerun of Perry Mason before embarking on his errands.

Well, Chris returned to the scene of the crime to do a little forensics work, and filed this follow-up report.  The story you are about to see is true.  The names haven't been changed because I'm too lazy:

I mentioned a couple of weeks ago that my Perry Mason habit spared me from the shoot-’em-up on Vine St, and speculated idly at the time that you might find a few pockmarks in the Bank of America masonry as a result. I finally made it up to the bank last Friday, and, while waiting for a bus south afterward, I had a look around the bus stop at the southwest corner of Sunset and Vine: 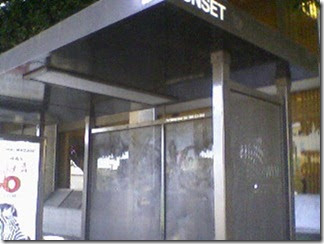 That’s the Bank of America building behind the bus shelter; didn’t see any dings in the BofA itself, but did see this, in the eighth-inch-thick perforated steel backing of the bus shelter itself: 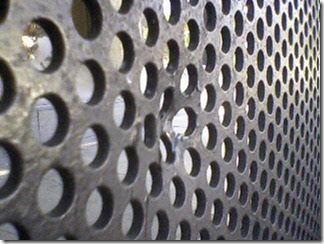 Another shot from the opposite angle: 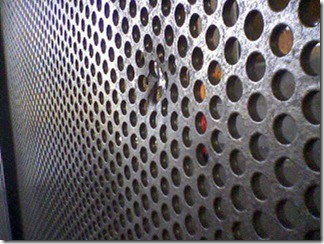 It’s hard to see in the photos (especially when you’re using a cheap cellcam like I’ve got), but that dimple is clearly the result of a small heavy projectile traveling at high speed, and the fact that it hasn’t rusted up yet makes it fairly recent, so I’m inclined to conclude that yep, Tyler Brehme put one of his bullets into the bus shelter.
I don’t mean to make a big drama out of this, but whew: had someone been seated on the center of the bench in the bus shelter, it woulda hit ‘em square in the chest.

Scott adds:  On the other hand, if we didn't make a big drama  out of everything in this town, TNT and Lifetime would be showing 24 hours of test patterns.  So I'm going to imagine Chris wrapping up by saying, "Looks like it's lucky that someone...(PUTS ON SUNGLASSES, STARES INTO THE DISTANCE)...sat this one out."

*thanks to Bogie for the reminder to properly close my David Caruso tags.
Posted by Scott at 12:49 PM

Glad I'm down in KTown where it's safe.

I'd get a new bank, if that would at all keep you safe from random acts of senseless, insane violence.

But then, in "my" neighborhood, if you can go a week without hearing gunfire, it's a good week. The 5th District NOPD don't show up until the bodies have cooled and been bagged.

And no, it's not a competition, because nobody wins, but NOPD are the only pork in the country who make LAPD look TAME by comparison.

You forgot the YYEEEEEEAAAAAAHHHHHH at the end.

M Bouffant writes: Also in the (former, for me) 'hood: Fire.

And then it gets weird: Despite Samuel Arrington, 22, of Sunland, being in custody for the three fires set Thursday, an additional 17 fires were set in the wee hours Friday, and then the firebuggery moved up to the valley this morning (Saturday), with an additional 10 fires.

So we got us a copycat arsonist, or it could be: [puts on sunglasses] they jugged the wrong firebug.