World O' Crap's Special New York Correspondent brings us a Miltonian piece on Mayor Mike's fall from The Man on a White Horse (granted, it was really more of a Shetland pony that had been spray flocked a cottony white using left over Christmas technology, and it made the horse kinda puffy and wooly, so Bloomie really looked more like The Man on a White Sheep -- nevertheless, he took a spill). 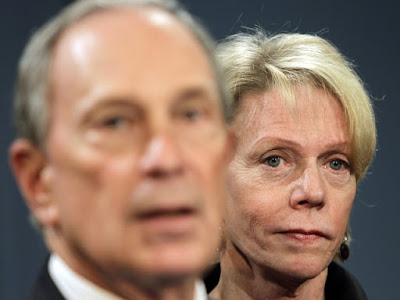 Chief of Staff: “Your Honor, I believe you’ll want to check your Daily Agenda.”

COS: “Well, you have to announce a replacement for the School Board Chancellor. Mr. Klein is leaving at the end of the month.”

COS: “To the Carlyle Group. Or Fox News, I forgot which, sir.”

MB: “Where’s Carly Fiorina? I thought we were doing a phone conference or something.”

COS: “Ms. Fiorina is unavailable. Something to do with negotiations with the Blackberry people.”

COS: “That would be Ms. Cathie Black, sir. I’ll arrange an interview right away.”

MB: “Excellent. Whew! Who would think investing in pork bellies could be so volatile. And now I’ll have a cup of tea, and one of those nice cucumber sandwiches you promised me.”

COS: “Mr. Bloomberg, there were no cucumbers in the market his morning, sir. I went down twice.”

COS: “No sir, Not even for ready money.”

So ends one adventure with commodities, and begins another in the commoditization of public education in the nation’s largest school system.

Readers, may I introduce you to Ms. Cathie Black? She has no degree in education, or higher education, or anything that might involve education. So in this “special” situation, Ms. Black must require a “waiver” from the State of New York to overcome her deficient qualifications. The waiver comes with a rider --- she must be monitored by someone with at least a Masters Degree in Education. Or at least a high school cafeteria worker. Something.

Well, we know she has a fetish for “dog collars” or whatever costume jewelry strikes her fancy. Cathie didn’t last long after the “Sophie’s Choice” line, but the money-shot: “Can we have some birth-control here?” She lasted two weeks, perhaps three.
Posted by Scott at 3:08 AM

Black was about as qualified to be school's chancellor as Bloomberg was to be mayor.

The Rise and Fall of American Democracy.

Disgruntled parent feels like she is meeting back the Moskowitz flying monkeys on Gotham Schools. I can feel the blood pressure rising.

Gasp. It's The Staffer Himself.
I always wondered how this lady got the job but now All Has Been Revealed.Thank you, Staffer.
Suezboo

Why does the Crypt Keeper get to oversee NYC schools?

Because Jigsaw (aka Joel Klein) dies in Saw IV