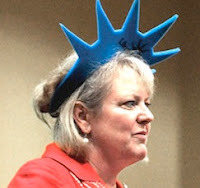 If you've been wondering what passive-aggressive drunk-dialer and pillow talk influence-peddler Ginni Thomas has been doing lately, look no further than today's edition of TheDC Morning, where Jim Treacher obligingly flacks for the obliging flack.

Since she last irritated the public eye by phoning Anita Hill at the crack of dawn and singing "You Ain't Woman Enough to Take My Man" into her answering machine, Mrs. Thomas has not been idle.  It seems that merely being the wife of a Supreme Court justice and a lobbyist for parties with a financial stake in Supreme Court decisions wasn't sufficiently potent to satisfy her conflict of interest jones, so now Ginni's a journalist as well.  The self-described "self-appointed ambassador to the (GOP) freshmen class and an ambassador to the tea party movement,” is now working the Tiger Beat at the Daily Caller, scoring a series of puff piece interviews with the new meat.

But let's let Jim tell it in his own, apparently easily imitated, style:


More bad news for Holder -- Yet another Republican is being mean to him by holding him accountable for his actions.  Matthew Boyle reports:

Freshman Republican Rep. Steve Southerland of Florida told The Daily Caller that Attorney General Eric Holder's "blatant disregard" for the congressional investigation into Operation Fast and Furious and the subpoenas he's been issued is an affront to the American people.  In an interview with TheDC's Ginni Thomas, Southerland said Holder's apparent failure to comply with lawfully issued subpoenas is an exhibition of his "sense of entitlement"--


--by acting like his position is his "stake in life" and that he doesn't "owe anyone for that position..."

Translation:  Holder is an Affirmative Action hire.  Not really sure what the 'stake in life' thing means.  Perhaps it's a local idiom that doesn't translate well to English.


Southerland added that he thinks Holder is acting like he's personally guaranteed the position of Attorney General of the United States...

You know how hard it is to fire an affirmative action baby; at the first whiff of a pink slip they get the NAACP involved.


...and isn't showing any regard for answering questions the American people have about Operation Fast and Furious.  "When we're elected, we must thank those that put us here," Southerland said.

We must also bitch about how a Congressman's salary really isn't all that great:


According to the U.S. Census Bureau the median household income in 2009 was $49,177, almost $98,000 less than what a member of the House of Representatives makes. But that's apparently not enough for Rep. Steve Southerland (R-Fla.).

During a town hall meeting in Florida on Wednesday, when asked about his pay, the congressman told his constituents that his yearly salary of $174,000 was "not so much" -- especially once you account for the number of hours he works, the fact he had to sever ties with his family's funeral home business upon assuming office, and the heightened danger he faces as a public official.

"By the way, did I mention? They're shooting at us. There is law-enforcement security in this room right now, and why is that?" Southerland told his constituents, according to the Tallahassee Democrat. "If you think this job pays too much, with those kinds of risks and cutting me off from my family business, I'll just tell you: This job don't mean that much to me. I had a good life in Panama City."

Yep, not only are we failing to adequately compensate Steve for the 2½ days a week he he actually shows up for work, but we're too stingy to offer him combat pay, even though this heroic man, like our brave troops, has seen more than his share of death -- primarily due to his inheriting a string of funeral parlors.

Anyway, sorry for interrupting.  You were saying, Steve?


"And, when an elected official appoints someone else, they do owe the American people the appreciation of having that position.  So, I find the blatant disregard of answering subpoenas and the stall tactics -- it is really a slap at the American people."

That's the problem with Affirmative Action babies -- they're ingrates.  But then, you can't be expected to value something unless you've earned it.

Southerland was clearly made livid by Holder's testimony -- enough to start blowing his dog-whistle as furiously as the Police Sergeant in The Pirates of Penzance -- but racist code words aside, one must defer to his expert judgment.  As a member of the House Judiciary Committee, Rep. Southerland has been witness to...Oh, he's not?  He wasn't there, grilling Holder like Perry Mason?  Then why the hell are we listening...Well, yeah, I suppose the opinion of the lowest ranking member of the Subcommittee on Nutrition and Horticulture does provide an unusually fresh perspective.


Remember:  Eric Holder wants the Daily Caller to stop asking Congressmen for their opinions on Fast and Furious and then publishing their answers.

Actually, the Daily Caller's disgraced "reporter" phoned the nuttier members of Congress out of the blue and demanded to know if they thought Eric Holder should resign.  A few -- among them some of Congress' dimmest lights -- said yes, reasoning they had a 50/50 chance of getting it right.


AKA the practice of journalism.

Then try to imagine that, while "[e]xplaining his role in the botched firing of federal prosecutors, Gonzales uttered the phrase 'I don't recall' and its variants ('I have no recollection,' 'I have no memory') 64 times," including the immortal formulation, "I don't recall remembering."


The prevailing media reaction would've been a bit different, don't you think?

Yes, I think you'd have been defending him.  And defaming any Congressman or -woman who asked him a direct question.

Let's take a quick peek at Ginni's interview before we go... 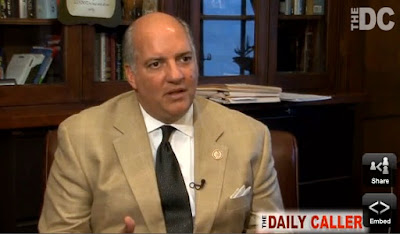 Southerland stands out as a real leader with clear vision and strong faith that is tested regularly in the nation’s capital. [...] The Daily Caller’s Ginni Thomas sat down last week with him to hear what makes him tick.

In this interview, this Freshman says and sees what many others don’t:

He should stop huffing the leftover embalming fluid.


While America is clearly broke, the Obama Administration is “redistributing our wealth” to other nations, according to Southerland, through the Federal Reserve and the IMF.

It's too bad Rep. Southerland is already married.  I'd love to set him up on a play date with Dr. Laurie Roth.

While there are some people who might be cheered by signs of increased economic activity -- especially during a prolonged recession -- Steve sees what many others don't, and to him, Prosperity looks like a dead body.

He would be hard pressed, he said, to find nine in the entire state of Florida.

But not all economic news is bleak in the Sunshine State!  Thanks to rising rates of malnutrition and suicide, Happy Days Are Here Again in the mortuary industry.
Posted by Scott at 12:23 AM

I blame Holder for not bringing the Republicans (and the banksters) to justice.
~

I think there are nine fucking cranes around the new Marlin's stadium in Miami. Man, while this guy is seeing things that no one else is, he sure isn't looking very hard at what is really there.

If you want to characterize the free and easy flow of something, the first thing that comes to mind can only be... honey.

Ginni Thomas writes of Holder's reaction to whatever it was he was reacting to: He does not like it one bit.

Last person I heard use this infantile phrase was LaToya Jackson, in that annoying little-girl-on-quaaludes voice of hers (talking about her own reaction to something). She may have even said "I didn't like it one little bit".

Honestly, who above the age of six talks like this?

If I was the freshman class, I'd recall my ambassador

Keep up the good work. And Merry Christmas! ;)