Harry Potter and the Cauldron of Crazy

There are an abundance of housecleaning services in Hollywood, with names like Merry Maids, White Glove, Sparkle Maids and the like.  I've never employed one, but a friend who's frequently out of town has called them in on occasion, and each time the "Maids" who showed up were lugubrious Russian men in their mid-40s who littered the balcony with cigarette butts, sawed resentfully at the grout with a wire brush like they were trying to extract a confession, and stole the half-full bottles of Pine-Sol and Formula 409 from under the bathroom sink.

So when I read that "Father Gabriele Amorth, who for years was the Vatican’s chief exorcist...claims to have cleansed hundreds of people of evil spirits" I wondered if he works on weekends, what he charges for a house call, and if he slyly pockets your soul and your cinnamon-scented votive candles on his way out the door.

Alas, it seems that Father Amorth is retired, and no longer spends his days mopping up after Mephistopheles.  On the bright side, he now has more time to devote to his hobby of spouting parochial blather and demented cultural analysis.  For instance, he recently said:


[Y]oga is Satanic because it leads to a worship of Hinduism and “all eastern religions are based on a false belief in reincarnation”. 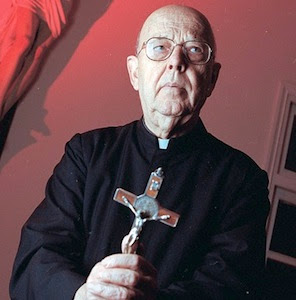 "Pilates are the path to Pazuzu!"

So if you've spent your life treating trauma and mental illness by waving around an action figure of a dead man dangling from a torture device, while mouthing a bunch of Latin mumbo jumbo, I'm sorry, but you made your choice, this is as good as it gets, and you don't get a do-over.

Anyway kids, don't do yoga, because if you become physically flexible, you can't remain morally inflexible, or something like that.  But the Cow Face, or the One-Legged King Pigeon aren't the only threats facing today's youth:


Reading JK Rowling’s Harry Potter books is no less dangerous, said the 86-year-old priest, who is the honorary president for life of the International Association of Exorcists, which he founded in 1990, and whose favourite film is the 1973 horror classic, The Exorcist.


The Harry Potter books, which have sold millions of copies worldwide, “seem innocuous” but in fact encourage children to believe in black magic and wizardry, Father Amorth said.

Suddenly, the old priest whacked a passing Denny's waitress with his crucifix because "her knees were making an unholy crackling sound that probably means they're filled with demons, or arthritis," then Father Amorth rose from his booth and shouted, "The Power of Christ compels you to honor my coffee coupon!"


“Practising yoga is Satanic, it leads to evil just like reading Harry Potter,” he told a film festival in Umbria this week, where he was invited to introduce The Rite, a film about exorcism starring Sir Anthony Hopkins as a Jesuit priest.

Meanwhile, as the audience snickered and reached for their coats, the festival director wrenched a crozier from the hands of a nearby bishop and attempted to hook Father Amorth off the stage like a poorly received Vaudevillian.


“In Harry Potter the Devil acts in a crafty and covert manner, under the guise of extraordinary powers, magic spells and curses,” said the priest, who in 1986 was appointed the chief exorcist for the Diocese of Rome.

Well Father, the curses are mostly used by evil characters in the books and movies, but as for the "extraordinary powers" and "magic spells," don't you claim to have the rather extraordinary power to evict demonic squatters, and perform the alchemical feat of turning bread into human flesh and wine into blood?  I mean, isn't it possible that there's just a wee bit of professional jealousy involved in your criticism, if only because transfiguration spells are so much more crowd pleasing than transubstantiation?


“Satan is always hidden and what he most wants is for us not to believe in his existence."

I don't know who Satan's with, but he's getting seriously crappy PR advice.  He should talk to Platform Media Group, or Qorvis Communications.


"He studies every one of us and our tendencies towards good and evil, and then he offers temptations.”

Father Amorth himself was nearly led astray by the sprightly tempo of "Girl (Why You Wanna Make Me Blue)".


Science was incapable of explaining evil, said Father Amorth, who has written two books on his experiences as an exorcist. “It’s not worth a jot."

Science also lacks any precise scale for measuring Jackassery, so you can see why Father is skeptical.  Also he believes that whole Galileo thing should be treated as a Cold Case and reopened.


"The scientist simply explores what God has already created.” His views may seem extreme, but in fact reflect previous warnings by Pope Benedict XVI, when as Cardinal Joseph Ratzinger he was the head of the Congregation for the Doctrine of the Faith, the Vatican’s enforcer of doctrinal orthodoxy.

So while the Vatican's former chief exorcist says that Science is a lot of crap, it's not really that extreme a view when you remember that it's shared by the guy who used to head up the Inquisition.


In 1999, six years before he succeeded John Paul II as Pope, he issued a document which warned Roman Catholics of the dangers of yoga, Zen, transcendental meditation and other 'eastern’ practises.

So just to review:  According to Cardinal Ratzinger, widespread child molestation in the Church?  Not a problem.  Fitness classes at the Y?  The death of Christendom.


They could “degenerate into a cult of the body” that debases Christian prayer, the document said.

Bodies, like children, should be seen and not heard.  Especially not in the presence of a District Attorney.


Yoga poses could create a feeling of well-being in the body but it was erroneous to confuse that with “the authentic consolations of the Holy Spirit,” the document said.


But that's true with any form of exercise, really.  For instance, Jim Fixx was struck dead because his "runner's high" was helping him to achieve a more personal relationship with Ba'al.


Father Amorth has previously said that people who are possessed by Satan vomit shards of glass and pieces of iron and have such superhuman strength that even children have to be held down by up to four people. He has also claimed that the sex abuse scandals which have engulfed the Catholic Church in the US, Ireland, Germany and other countries was proof that the Anti-Christ is waging a war against the Holy See.

Science, however, has missed, or failed to explain all these phenomena, thus proving just how jotless it is.
Posted by Scott at 10:21 PM

1. Having worked for a Y, I can personally say that there are Ratzingers/Chupacabras abounding within, they're not all like the West Village or W. Hollywood. Neither to be trusted nor treated as such warm & cozy houses of help.

2. Jim Fixx was asking for it. Just ask Bill Hicks.

3. Gee, a crazy old batshit-insane old pedophile, excusing the child-rapists by blaming it, yet again, on the existence of an invisible-sky-fairy-friend whose deeds can only be observed and explained by pseudo-ascetic fetishists who wear more drag than Harvey Fierstein and Bugs Bunny combined and whose handmade Italian footwear could easily feed/provide family planning for an entire village in (pick your "third world" country still with the Holy See's bootheel at its barely-functioning throat.). Fuck 'em if they can't take the truth, and ram a crucifix up their well-exercised rectums until they CONFESS the truth. Unless they're into that, in which case the crucifix can easily be replaced by broken wine bottles.

“In Harry Potter the Devil acts in a crafty and covert manner, under the guise of extraordinary powers, magic spells and curses,” said the priest, who in 1986 was appointed the chief exorcist for the Diocese of Rome.

Like walking on water? Raising the dead? Turning water into wine?

Good to see that you're alive, post-birfday boy... sooooo, how old ARE you, punkin'?

I saw that movie, "Pilates of the Caribbean."

I don't know if it's even worth the effort to type this, but the devil does not appear anywhere in the Harry Potter books. This guy can't even get through a simple rant without lying, or possibly without ever having read the books he's attacking here.

Are "the authentic consolations of the Holy Spirit" sort of like the gift pack you get if you miss the trivia question on Regis and Kelly? I'm asking because I always thought a feeling of well-being in the body was a gift from the Holy Spirit, not a distraction therefrom, otherwise why did Jesus spend so much time healing the sick? Or do illness and well-being both come from Satan and must be cast out? And once they're both cast out, what takes their place? Some sort of shitty consolation prize?

the devil does not appear anywhere in the Harry Potter books
Proof that the devil is hiding there!

Father Amorth probably thinks Giordano Bruno got a light sentence. This anti-Christ canard is tiresome. In the bible the term is used three times I believe, in John 1 and 2, to describe those who deny Jesus' divinity, which means something in the neighborhood of 4 or 5 billion anti-Christs are currently on the planet. The usage made by all the Calvinist types, and loony Catholics like this clown, comes from radical medieval interpretations of Revelation, in which the term itself is never mentioned.

You gotta wonder how well the Potter books - which are so British in their outlook - translate into Italian. Or Latin. Fer shure the Father didn't read them in English.

Anonymous is right, Revelations has no antichrist, it only refers to a Beast (or 2 Beasts) and nobody can buy or sell unless they have the mark of the beast, which it turns out is Herman Cain's 999 plan inverted.

Oh, and yoga and Hinduism are demonic? In Revelations, 7 seals are broken so that there can be this big heavenly marriage uniting all the celestial powers, which is such a direct ripoff from Kundalini yoga that the Church would be sending a fat royalty check to Kashmir every month if ASCAP had anything to say about it.

Dammit, I am two days too late to make the Bill Hicks reference! TWO DAYS! My life has spiraled out of control.

My mother was married to a Roman Catholic in the 50s and 60s (her first marriage, my dad was her second husband). She converted and, when she and her first husband moved to St Louis, they ended up attending the church where the "Robbie Doe" family attended. She told me this then was stubbornly quiet about details the rest of her life, apparently because I noted that my stepbrother born to mom and the Catholic dude was also named Robbie. She didn't like the implications, and frankly, neither do I.

With all that real creepiness going on, it's sad Amorth has to invent yoga conspiracies. He's obviously so spiritually numb that he can't get a God boner from mere Satanic possession anymore.

"Bodies, like children, should be seen and not heard" ... isn't it "sodomized but not heard" ?

Carl, that is NOT the face of a furry. An unrelenting, self-loathing sadist (yeah, I know, redundant) with a fabulous collection of medieval torture devices in his sub-basement, yes, but the only fur that he savors is the peach-fuzz on altar boys.