Exclusive Project Veritas Scoop! Must Credit Someone Who Gives a Crap!

Have you ever wanted to see the future?

I must confess, it's a urge I share with other muckraking journalists, such as Lincoln Steffens ("I have seen the future, and it works") and Criswell ("Future events such as these will affect you in the future.")  Unfortunately, James offers us a glimpse of a particularly grim future, a dystopian, topsy-turvy world, in which the President is black, but our pimps are white!


For the first time ever, I’m inviting Daily Caller subscribers to join me for an exclusive live online premiere of the new investigation from Project Veritas — before we release it to the media or the public.

Attendees will get a sneak peek at the biggest bombshell we’ve dropped on the establishment since ACORN — before it hits.

Click HERE to accept your invitation for the LIVE ONLINE PREMIERE

Our hard-hitting investigations into corruption at ACORN and NPR, as well as voter fraud and Medicaid fraud were BIG news. This could be bigger.

James' record has been a bit spotty, but this last last claim could very well be true, since I don't really remember his hard-hitting investigations into Medicaid (note to James: not a sexy subject.  Needs moar dildos), and that voter fraud stuff kind of fizzled except for a bit of tittering mockery from Gawker and TPM.  So for me, the question is, could this be bigger than his E. Howard Hunt tribute band, when he got busted for trying and failing to tamper with the phones of a Democratic Senator?  Could it be bigger than his attempt to lure a female journalist onto a sex toy-bedecked "love boat" so he could show her his "Captain Stubing"?

Unfortunately, we have limited space for this online event and it’s going fast.

The event is so exclusive that, although it’s coming up very soon, I can only release details to the folks who RSVP.

This is crucial, because James has to know how much Chex Party Mix to buy.


Accept your invitation NOW to find out when and where to tune in.

This brand new investigation is unlike anything we’ve ever released


Project Veritas invested hundreds of hours and tens of thousands of dollars to capture footage so outrageous it will have your jaw on the floor. I think you’ll agree it was worth it.

It certainly sounds powerful, kind of like that video tape in The Ring, except instead of killing you in seven days, it just dislocates your mandible.  On the down side, this will make it more difficult to enjoy the Chex Mix.


The politicians and media talking heads will go CRAZY when they see what we’ve DUG UP.


But let them wait. The Daily Caller has made it possible for YOU to get the dirt first.

The "dirt," eh?  So this is less The Jungle and more Confidential Magazine.


Get ahead of the media firestorm: RSVP HERE to attend the online premiere.

I promise this is an event you won’t want to miss. RSVP right now.

James sounds like an inexperienced host who went all out for his first party, then had a nightmare he would wind up sitting alone in his living room with a chafing dish full of cold Vienna Franks and a dozen 2-litre bottles of warm Mr. Pibb.

P.S. Daily Caller subscribers are invited to attend the exclusive online premiere of the latest investigation from Project Veritas, followed by a live question and answer session with me, James O’Keefe.

Go HERE to accept your invitation and RSVP.

And remember that all of our investigations are made possible by your generous support. Please help us keep making these crucial reports by donating to Project Veritas today.

Even though I felt that James was pushing his sales pitch just a wee too hard, I clicked the link to RSVP NOW!, and found myself immediately reassured that this is not merely a hectoring, carnival midway come-on for a first peep at "dirt," but a serious and professional piece of investigative journalism: 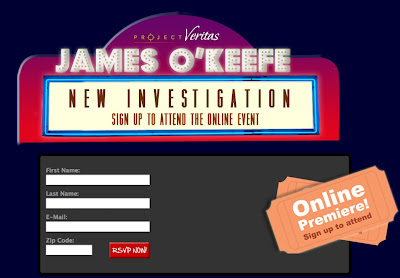 a dystopian, topsy-turvy world, in which the President is black, but our pimps are white!

I think we all need to go! That Chex Mix is not going to eat itself... Or is THAT the event?

Nothing says "news" like breathless flak copy for a PR event.

Hey the dude has to prostitute himself to keep himself in Cheetos some how. It's not like anyone would actually purchase his "services" in the love you long time kinda way

For those who just couldn't wait, or who wouldn't give those shits a Green Stamp, here is the big bull story:

Imma guess that ol' Jimmy got tired of the media pointing and laughing as his "exposes" were, um, exposed, so he wants to try to build a myth before the truth can get its boots on.

Jimmy? Don't bother. You're the myth now. And we're not laughing at you, we're laughing near you.

I'm pretty sure James O'Keefe is incapable of experiencing shame or embarrassment, but he's badly fooling himself if he believes that contributors to Project Veritas share his disability. It ain't funny, sonny. I mean, I'm embarrassed, on behalf of humanity, for this clown.

This is lame, high-school AVClub quality work, and I note that his crack team of videographers lack even the ability to set the time-date stamp on their video equipment (unless they did in fact shoot this more than three years ago and have been keeping it under wraps ever since).

The fact that O'Keefe expects anyone to fall for the silly premise (nobody does, by the way) is a little shocking-- this is simple psychosis. I'd recommend a drug test for starters, because this is such common tweaker behavior, but I wouldn't stop there. This man needs work. A lotta work.

Includes comments from the guys who took the time to talk to him and his idiot friend, such as:

"We figured they were shysters," said Tocci, an assemblyman for 20 years until becoming commissioner of Veteran Affairs from 2005 to 2007. "We tried to be courteous. They were young kids; first thing that comes to mind is that its young idealists, like Occupy Wall Street. We sized it up even half-way through the meeting when they couldn't explain what they did with the dirt."

As Media Matters points out, the only thing they're guilty of is being too polite to these morons.

When does he hit you up for money?

Oooooh, Mary, Mary :
The Bloggess has a rather dishy Nathan Fillion pic up. Well, I think he looks luscious, anyway.Your opinion?
Suezboo

PS Not to dampen your enthusiasm but I think he may be gay, also too.All the best looking hunks are - fact of Sad Life.Doesn't mean that internet lust cannot run rampant ( as it were).

"Unfortunately, we have limited space for this online event and it’s going fast."

Everybody got that? The internet is filling up....

Suze, I did see that picture of Nathan with Anne Wheaton, wife of Wil (who haz mad photobombing skillz), but I'm not entirely sure that Nathan actually has any twine in his pockets. I think he may just be happy to see Anne.

That being said, Nathan--and innate "Nathaness", is not about being Gay or Straight; he's about being so awesome that everyone can fantasize about him to their heart's content.