A little while ago, Mary walked past my computer while I had World O' Crap up on the screen, and said, "That's a great picture of Mara Corday.  Very nice side-boob."  And while I knew she intended the remark as a compliment (when has the term "side-boob" ever been used in a pejorative manner?  Probably not once in the history of the English language, let alone in the history of side-boob, which is even older [19th Dynasty Egyptian frescoes, I'm looking at you]), I still felt a bit slighted, because this was a birthday post, and if there's one thing we don't stint on around here, it's birthdays.

"I beg your pardon," I sniffed.  "But that's not side-boob.  It's full inner front boob."  And then it struck me: had I gone too far?  In my quest for the perfect piece of classic cheesecake art, had I violated the standards and practices that have long made Wo'C the leading family-friendly blog on the Internet?  I wavered back and forth on this question for several agonizing moments, until finally it became apparent that only a professional could resolve such a thorny issue of taste and decorum.  So I appealed to World O' Crap Official Fashion Consultant, Mr. Paul ("I'm Kookoo for Coco Chanel") Kokoski.

The name isn't ringing a bell?  Hey, shuck off those plaid pajama bottoms, pull your head out of that hoodie, and join the Fashion Revolution, people!  Now, I could go on for hours with a Friars Club-style introduction, but I'll never sum up Mr. Kokoski's unique qualifications as well as he himself does in his (unusually brief) author's bio on RenewAmerica:

Mr. Paul Kokoski holds a BA in philosophy from McMaster University in Hamilton, Ontario. His articles have been published in several newspapers and journals including, Homiletic and Pastoral Review, New Oxford Review, and The Toronto Star.

Garbage!  Glorified Pennysavers for the schmatta trade.  Sears catalogs with a smear of lip gloss!  If you want the real dope on haute couture, I suggest you go straight to the source: Homiletic and Pastoral Review.

Long-standing rules on modest dress, previously applicable to St. Peter's Basilica, were recently extended throughout Vatican City. For reasons of respect Swiss Guard officers have started banning members of the public from entering the city who wear "inappropriate"clothing. 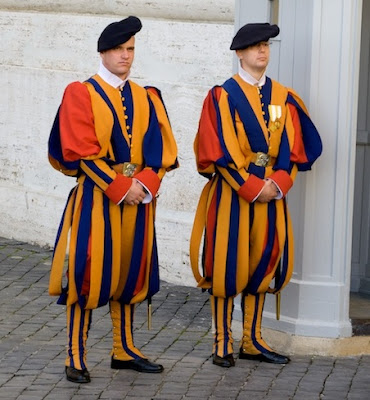 This is no doubt due to a flouting of the dress-code — a result of the sexual revolution which began in earnest back in the 1960's.

The development of the birth control pill had many unforeseen side effects, not least of which was the invention of the crocheted beer can hat.

I wondered where Coco Kokoski was getting his fashion facts, and it appears to be from this article, since he cribs a good chunk of it verbatim, although he doesn't bother to say just what, exactly, the Vatican's elite pantalooned paramilitary are cracking down on.  Turns out it's "Men in shorts and women with exposed knees or uncovered shoulders."  This has led to a bull market for local shawl peddlers, but some visitors don't appreciate getting the Go Fug Yourself treatment from a pair of Renaissance party clowns.  From the article:


Maria, in her late 70s, was one visitor to the Vatican who refused to be cowed by the Swiss Guards. After travelling from the Centocelle neighbourhood on the other side of Rome in 30-degree heat, she was advised that her calf-length flowered dress was "inappropriate" because it showed her shoulders.

The Swiss Guards eventually relented and allowed her through, quietly advising her to dress more appropriately next time. But Maria was unimpressed. "Given all the scandals the Church has been involved in, what possible right can it have to be preaching about the morality of sleeveless dresses?" she declared loudly, marching past indignantly.

So there you have it, a minor human interest story about mildly inconvenienced tourists.  But can't someone take this and turn it into a stinging indictment of a civilization teetering on the brink of oblivion?  Back to you, Coco:


The Blessed Virgin warned Jacinta of Fatima as early as 1920 that "Certain fashions will be introduced which will offend Our Divine Lord very much." She warned that "Those who serve God ought not to follow these fashions."


In regard to proper attire the Holy Bible tells us that women should "be decently dressed, adorning themselves with modesty and dignity, not with braided hair or gold or pearls or costly clothing, but with good works, such as become women professing Godliness" (1 Tim. 2:9-10).

I get the proscription of gold and pearls, but were women really so pressed for time in the 6th Century BC that only the rich could afford to braid their hair?  Were primitive hairstyling techniques so labor intensive that they required yoked oxen, or an elaborate pulley system?


The Old Testament also states: "A woman shall not be clothed with man's apparel, neither shall a man use woman's apparel; for he that does such things is an abomination to the Lord, your God " 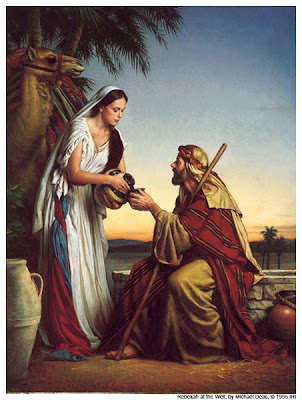 
Though this rule may seem absurd and outdated today our trifling with it may have been one of the many factors that led to gender-role confusion and ultimately to the wide acceptance of homosexuality and same-sex marriage in our Western culture.

Jesus didn't wear pants, but Marlene Dietrich did, and now I don't know where to put my penis.


The Vatican insists that both men and women refrain from wearing any kind of revealing apparel in church — not only because it is offensive to Our Lord but because it invites others to engage in various sins of both the flesh and the heart: "anyone who looks lustfully at a woman has already committed adultery with her in his thoughts" (Matt. 5:28).

And yet, amazingly, they let Jimmy Carter into the place in 1980.  Pope John Paul II was so peeved about this lapse in Vatican security that he demanded future visitors not only be frisked for weapons, but given an echocardiogram at the door to determine if they were attempting to smuggle lust in their heart.  Unfortunately, it took the guards 32 years before they got around to translating the Pontiff's memo from the Latin.


Modesty in dress, while important to the laity, also pertains to our clergy and those in religious life.

So no more going commando under the cassock, Padre.


Since Vatican II, many of our priests and nuns stopped wearing their religious collars and habits. This was due largely to a false sense of reform as well as to a conscious desire on the part of some to obscure the legitimate distinctions between the priest and the laity.

The nuns, on the other hand, were just getting tired of all the penguin jokes, especially after Happy Feet came out.


Partly as a result of these changes priestly vocations have dropped noticeably and vocations to the religious life — especially in Quebec — have become almost extinct. This, in turn, has caused many of our Catholic schools — which were previously run by priests and nuns — to all but lose their catholic identity.

A life of poverty and chastity sure sounds good, but once you discover that you're no longer required to  wear 20 pounds of black wool in summer, you've gotta ask yourself -- what's the appeal?


Vocations to the priesthood and religious life — wherein one devotes one's entire life to the faith — are not like other vocations.

For one thing, unlike most vocational schools you see advertised on cable TV, seminaries don't give you the option of earning a certificate in arc welding, medical billing, or gun repair.


As such they should not be hidden through recourse to the use of secular clothing: "People do not light a lamp and then put it under a bushel basket.

Because that's a fire hazard.


They set it on a stand where it gives light to all in the house"(Matt: 5-15). This passage of course refers to the spreading of faith through our holy actions. Nonetheless, ecclesiastical attire is a also a visible witness of Christian vitality of the highest value and therefore must be safeguarded.

I may not agree with your religious dogma, but I will fight to the death to defend your wimple.

Actress Meryl Streep once said that when she put on her nun's habit to film the movie "Doubt" she felt clothed in God and was convinced that real nuns who wear the habit must also share the same incredible feeling that every moment of their day is being dedicated to God. 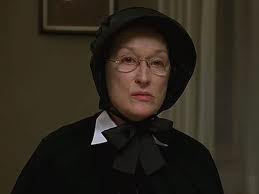 Yes, you can see the joy just oozing from every pore.

It is also said that actor Alec Guinness' conversion to Catholicism began when he first put on a collar to play a priest (Father Brown) in the movie "The Detective."

Later, he became a devout Jedi.


One evening Guinness, still dressed as a priest, was on his way back to his lodgings when a little boy, mistaking him for the real thing, grabbed his hand and trustingly accompanied him.

This is either a heartwarming affirmation of faith, or the opening teaser from To Catch a Predator.
Posted by Scott at 4:04 AM

And yet the Virgin Mary constantly appears to us as a twat.

"Doubt," by the way, is one hell of a movie, with Meryl Streep, Philip Seymour Hoffman and Viola Davis taking turns chewing the scenery to bits.

Shows up on IFC every so often, and I am always just awestruck by these powerhouse performances.

Yes, I can see the very direct link between... wait, what the fuck was this guy's point?

Oh, Selena Gomesz, you are going to HELL for that outfit! Look at it!

C'mon, Marlene wasn't the first/only woman to wear pants in Hollywood. I've got lots of pics of actresses predating Dietrich who did. Some rather surprising, too. Then again, they didn't wear tuxedos.

For you, it was Marlene in Blonde Venus, for me it was Divine in Mondo Trasho. Po-tay-to, po-tah-to; the point is that no one knows where they're supposed to shove their winkles nowadays, and this was totally never a problem in Biblical times, which is why the Bible makes a specific reference to gender-based clothing.

I'd like to ask this nitwit how he can believe in a God who's all-powerful and infinitely wise, yet at the same time so prim and delicate that the sight of a woman's bare shoulders causes him to clutch his pearls and go, "Mercy me, go put on a shawl!"