The Importance of Being Ernest

Academy Award-winning actor Ernest Borgnine has passed away at the age of 95.  I always admired his range (he played both the violent, racist hayseed in Bad Day at Black Rock, and the gentle, Bronx-born Marty in the same year, 1955), and career longevity (the most recent film I saw him in was 2010's RED), and when Mary came in to tell me the news, she scolded, "Now don't you feel bad for trashing him?"

Okay, I plead guilty to that, but with an explanation.  Over the 4th of July weekend I made a return appearance on Mike and Ike's All Star Summer Jamboree (ASSJAM) podcast, in which I spent a solid half hour ranting about the 1979 sci-fi snoozer, The Black Hole -- co-starring Ernest Borgnine.  (If you like the film, fear not, because Ike is there to defend it. Also, what's wrong with you?)  But I didn't really trash him, just everything and everyone around him.  Anywhere, click here for the podcast.  My segment is the first, starting at about the 2:45 mark, and running for 28 minutes of pure, spittle-flecked Disney hate.

However, I will confess that we kind of trashed him -- just a bit! -- in Better Living Through Bad Movies.  Specifically, the essay on 1975's The Devil's Rain (the mid-to-late Seventies were not kind to Ernest), which I reprint here as a warm and heartfelt tribute, because I'm too lazy to go down to the grocery store and get one of those $12 bouquets of carnations from the Produce department.

It is a dark and stormy night. Ida Lupino is worried about her husband—and she has cause, because when he shows up, he’s missing his eyes. Mr. Ida tells son William Shatner to take “The Book” to Ernest Borgnine, then melts into a pile of goop—a thing which apparently happens all the time, since neither Ida nor Shatner are much impressed by it.

Next morning, Shatner rides out into the California desert until he reaches Satan’s Subdivision (which, though it reeks of unholy corruption, is convenient to schools and shopping). He and Borgnine exchange fraught dialogue until it’s apparent they are equally matched in the overacting department, so they agree to a Faith showdown. As they enter the New England-style white clapboard chapel where the duel is to take place, we notice that the whole congregation is wearing black robes ornamented with Hello Kitty insignias—and they don’t have any eyes! Apparently, Borgnine’s entire following consists of a Braille Academy graduating class that he recruited in mid-commencement. 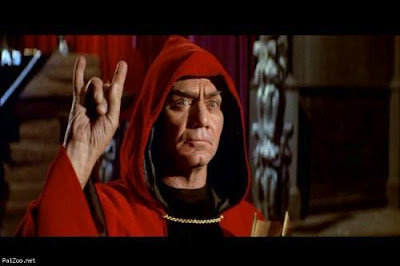 
Borgnine and Shatner each offer prayers to the deities of their choice, and then Shatner shoots a bunch of parishioners. This is not only improper behavior in a house of worship, but the judges rule that it constitutes illegal use of a foreign object, so Ernest gets his soul.

Meanwhile, over in Hooterville, Shatner’s brother Tom Skerritt and Tom’s vacant wife Julie are playing the Kreskin Home Game with Eddie Albert. Just then, Tom receives word that his family is missing and presumed damned. Tom and Julie head over to the Satanic Suburbs, where up-and-coming cult member John Travolta (who is listed in the credits as “Danny, the Littlest Satanist”)
roughs them up. Julie then has a ﬂashback to their previous lives in Colonial Salem. It seems they sold their souls to Satan (through his licensed representative, Ernest Borgnine) in exchange for acting careers. However, the good times ended when Shatner’s wife stole Borgnine’s book of names and ratted everybody out to the HUAC, which burned them at the stake.

The Satanists are impressed by Julie’s uncanny ability to provide exposition, and they kidnap her. A shaken Tom seeks help from Eddie Albert (Arnold Zifﬂe was busy). Eddie deduces that “The Book”, which has been in Tom’s family ever since the ﬂashback, contains the signatures of those who sold their souls back in Salem. Eddie further explains that Satan won’t accept delivery of the souls without proof of purchase, which explains why Ernest wants The Book so badly—it’s the end of the quarter and he needs to get his expenses in.

Tom and Eddie explore the quaint Satanist chapel, discovering a manhole that leads directly to Hell. While browsing around the underworld, they pick up a lovely souvenir at The Ungodly Giftshop: Satan’s Sno-Globe, a vessel containing the souls of Borgnine’s followers. These unfortunates are continually subject to the Devil’s Rain—which must be even ickier than golden showers, to hear the
people in the paperweight moan and groan about it.

But while they were sno-globe shopping, Borgnine grabbed The Book, causing Ernest to hideously transform into the physical embodiment of Satan—which means that he puts on a white fright wig, a sheep’s nose, and ram horns. Or maybe he suddenly became a spokesmodel for Dodge Trucks—the
movie’s a little vague on this point.

Tom puts on a Hello Kitty Satanic cap 'n gown and inﬁltrates the coven, but he blows his cover by objecting mildly to Borgnine’s plan to sacriﬁce Julie (allowing John Travolta to deliver his only line in the movie, “Blasphemer! Blasphemer!”). Score so far: Evil 5, Good 0.

Suddenly, the ﬁlmmakers spring their horrible surprise: William Shatner is still in the movie! And now he has the sno-globe. Fortunately, he succumbs to Eddie’s plea to break the cursed knick-knack, assured that this will free his soul (and everybody else’s) from the devil’s power. Unfortunately, this doesn’t end the movie, it just causes it to rain—and, as it turns out, devil worshippers are highly
water-soluble. So, everybody starts to get gooey and then to melt. For nearly ten minutes. What a world, what a world. While the copy on the video box promises “Absolutely the most incredible ending of any motion picture!” this sequence actually contains all the thrills of watching a carton of Neapolitan ice cream you’ve left out in the sun. But if you’re lactose intolerant, you might feel vindicated by it.

Eventually the landscape is littered with sticky piles of pastel goo that used to be Borgnine and company, and Julie and Tom are free to go on with their lives, released from the curse that has hung over their family for centuries! At last, Good (represented by the star of Green Acres) has triumphed over Evil (embodied by the co-star of Airwolf), just as it was foretold in the Book of Revelations. The End.

So, what did we learn from this movie? Mainly that the disposition of one’s immortal soul depends not upon good works, or mortal sin, but on whether Satan’s middle managers turn in their paperwork on time.

We also learned the importance of keeping good records. IRS Publication 552, “Record Keeping for Individuals” makes the same point, albeit without William Shatner or John Travolta, so it’s more entertaining. This pamphlet, written for Americans of all ages, asks thought-provoking questions, like “Why Keep Records?” and then provides faith-afﬁrming, weirdly ungrammatical answers (“In
addition to tax purposes, you may need to keep records for getting a loan”).

IRS Publication 552 also deals with speciﬁc situations that may come up in the life of you, the taxpayer. For instance, if you are in the second-hand soul business, and somebody happens to steal your inventory, here is vital information about what records you need in order to ﬁle a tax write-off on those souls:

Casualty and Theft Losses of Souls

Before ﬁling a deduction, you must complete form 666-EZ, indicating the amount you paid for each soul. (For intangible payments like “fame” and “power,” provide a fair market estimate by checking comparables on eBay; the fair market value of “love” will be determined by whatever the women
are willing to sell themselves for on the current version of “The Bachelor.”)

To support your claim for a casualty loss, your records should show the type of mishap that destroyed the soul or souls (e.g., “water damage.”)

Hint: keep a journal, making note of all the information you will need to ﬁle your IRS claim. For example, “Dear Diary, On June 2, 1975, I asked the satanic intern, John Travolta, to check on the souls that I keep in a sno-globe stored in a pit of hell. He said he couldn’t ﬁnd the sno-globe, as it had been stolen. Probably by blasphemers. Those souls were my property that I purchased in a ﬂashback. Before I could get them back, they all melted, so they were a complete loss. (Well, the William Shatner soul had already been depreciated to worthlessness by those Priceline commercials, but the rest were pretty valuable.) I must remember to claim a loss on this year’s income tax return, which I fully intend to ﬁle in January. Because, as we all know, it’s intending to pay taxes that pave hell’s roads.”

Email ThisBlogThis!Share to TwitterShare to FacebookShare to Pinterest
Labels: ASSJam, Movies, One of the Good Dead Ones, The Book

Yeah, Borgnine was in some stinkers, but like some other actors I can name with less than stellar later careers, he really, really loved to act, in whatever he was asked to act in, and wasn't real fussy about the project.

Just plain glad to be there, and he always gave his best.

Best Borgnine for me was actually his Fatso Judson of "From Here to Eternity" and wow, what a killer performance he gave as a sadistic Stockade Commander.

Also liked his nice turn in a bit part in 1997's "Gattaca," as an gruff and aging janitor with, it turned out, a soft spot for the "invalids."