Joshua Fit the Battle of Jericho-pay 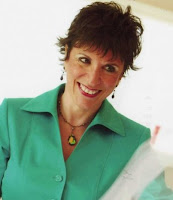 Jeannie DeAngelis, who was last seen investigating and/or starting rumors that Michelle Obama owns underwear, has discovered/made-up an even bigger scoop this time. It seems that while every evangelical Christian in America was staring at the door, waiting for the return of Jesus, revenant Moses came in through the bathroom window!

Rafael Edward "Ted" Cruz, junior senator from Texas, embodied a powerful role with deep resonance in his marathon fight on the Senate floor against Obamacare.

Given that the fight was fixed, with a predetermined outcome, I'm guessing the role played by Rafael Edward "Ted" Cruz was professional wrestler.  "Ted" is a terrible wrestler name, though, so I went through the WWE (and regional affiliates) rosters and found some names that might be more suitable:

Damien Demento (even if you're a decent wrestler, there's going to come a point in the match when the spectators start to wonder when you're going to stop bashing people over the head with folding chairs and leaping off the turnbuckle, and finally get around to playing "Fish Heads" or "Bounce Your Boobies").
Brutus "The Barber" Beefcake (despite his adroit moves and crowd-pleasing pecs, he never showed the same raw charisma in the ring as Floyd "The Barber" Lawson).
Dolph Ziggler (While I wouldn't go see him wrestle, I would pay scalper's prices to see a naked sword fight between Dolph Ziggler and Dirk Diggler.
Mantaur (terrible wrestler, but a half-decent Syfy movie).
Shark Boy (okay wrestler, terrible Syfy movie).
Scotty 2 Hotty (I'm actually reserving this one for myself, so BACK OFF, "Ted.")

Hm.  None of these actually seem like much of an improvement, since Ted isn't really the shirtless, rough and tumble type, but more of an effete, elite, Lord Fauntleroy sort, so I move that henceforth, "Ted" be known as "Filibuster Brown."


He has rightly said of the battle America is currently involved in with Barack Obama and his ghoulish army of liberal Democrats: "This is life and death." And well it is!

I tried to do my patriotic duty and join the Ghoulish Army (after seeing a poster that said, "Uncle Samhain Wants You"), but I was declared 4-F, due to excessive alliteration.  Still, I really think Filibuster Brown is onto something with this notion of turning meaningless political stunts into matters of life and death, and suggest we erect a geodesic cage over the well of the Senate and rechristen it "Thunderdome."


Although many remain clueless, the truth is that the dire Obamacare situation is of biblical proportions.


Whether Americans realize it or not, if Obamacare is not stopped, the nation will embark on a 40-year slog through a healthcare wilderness that will result in very few of us, if any, making it out alive.

Because it's like Thunderdome!  Two men enter, one man leaves.  It's basically a death panel, but instead of sitting through a dull hearing in a room with harsh fluorescent lighting and linoleum tiles the color of speckled brown eggs, you're forced to fight a weight lifter and a dwarf to the death.  At least, as soon as they call your number.


That's why Ted Cruz (R-TX) has become a political Moses for many.

The "many" being those people who are looking for a leader to follow around the desert for 40 years. But this Moses is even better than the original, because Ted knows a shortcut that'll shave almost half an hour off the trip.

Because even in the Senate, there's a finite number of assholes.


includes Senators Rand Paul (R-KY), Marco Rubio (R-FL), Mike Lee (R-UT), and Jim Inhofe (R-OK), all of whom can be likened to antiquity's Joshua, Aaron, and Hur, the men who supported Moses during the battle against the Amalekites.

Rand Paul, for instance, can be compared to Hur, who disapproved of God giving manna to the Israelites, because socialism.

Cruz choosing to defy Barack Obama and stand toe-to-toe with Senate Majority Leader Harry Reid is reminiscent of what happened in Scripture at Rephidim when the Israelites responded to an Amalekite attack. It was there that Moses instructed Joshua to "Choose some of our men and go out to fight the Amalekites. Tomorrow I will stand on top of the hill with the staff of God in my hands."

Yes, nothing braver than pre-emptively invading another country, then sending someone else to go fight the war you just started while you watch it from your skybox.


Like a modern-day Moses, Ted Cruz has taken to the Senate floor to stand firm against a ferocious enemy called ObamaCare.

Which, brave and fierce a battle as that might be, it's going to make for some particularly crappy devotional art.  For example, here's the picture Jeannie inserted, midway through the post, to illustrate her "Ted is Moses" thesis: 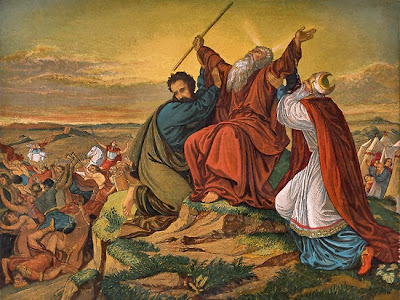 But here's the picture that ran at the beginning of her column: 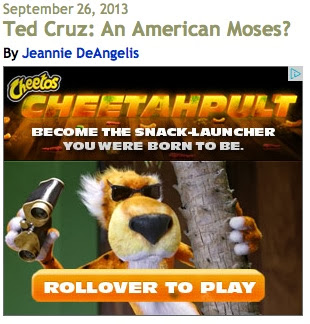 In Scripture, when Moses grew weary and lowered his arms, the tide turned in favor of the Amalekites. The Bible says that Aaron and Hur provided a stone for their leader to sit on and the men held up Moses' hands, "one on one side, one on the other -- so that his hands remained steady till sunset." Regrettably, Senator Ted Cruz did not have the luxury of sitting; he stood for 21 hours straight, but he did have a team to hold up his arms, so to speak.

It didn't have any effect on the outcome of his Peanut Filibuster Parfait, he just wanted the world to see that he felt confident, dry and secure.

In an effort to prevail over the army of ObamaCare advocates, along the way Senators Paul, Lee, Rubio, and Inhofe were joined by David Vitter (R-LA), Jeff Sessions (R-AL), and Pat Roberts (R- KS), who, like modern day Moses-helpers, stood up alongside Cruz, in effect holding up Cruz's hands.

While Vitter helped Cruz hang in there longer by providing a constant supply of fresh diapers.

Cruz had this to say about "principle" and "standing for integrity":

I will say standing here after 14 hours, standing on your feet, there's sometimes some pain, sometimes some fatigue that is involved, but you know what? There's far more pain involved in rolling over...

And yet Chester Cheetah clearly wants you to rollover, which is just like the way the snake tempted Eve in the Garden, proving just how biblical this whole thing is.

Moses' upheld arms assured that Joshua was able to overcome the Amalekite army. So, shod in black tennis shoes, Ted Cruz is a political Moses of sorts.

Regardless of what the Washington DC establishment believes, in the hearts of millions, Cruz continues to articulate the fear and disgust a majority of Americans feel about being forced against their will into ObamaCare.

And if there's one thing I know about the American people, it's that there will always be a place in our hearts for fear and disgust.

Although even a pusillanimous politician can find relief with Dr. Scholls for Her® Hidden Arch Supports ("Made with unique FabuSTEP® gel"), although in keeping with our theme, I suppose it should be Dr. Scholls for Hur®.


Senator Cruz is certainly not done standing; he will continue to stand, even though he is no longer speaking on the floor of the Senate.

If he spends more than 20 minutes sitting on the toilet, for instance, his thighs go to sleep.


For the rest of us who stand with him on the side of freedom, let's join together and continue to hold up Cruz's arms and extend to him the heartfelt appreciation of a grateful nation.

And at night, when we're tired of holding up his arms and want to go to bed, we can put some suction cups on his hands and leave him stuck to the window like a Garfield doll.

[Annoying Note:  We're having a Beg-A-Thon this week (click here for the woeful details).  If you can throw a few bucks our way, it would be enormously helpful. Please click on the button at the top left, or just use our PP account name: scott.clevenger- at - gmail.com.  If you're not Pals with Pay, email me and I'll send you our snail mail info.  And many thanks to the very kind folks who have already given.)]
Posted by Scott at 1:47 AM

Whether Americans realize it or not, if Obamacare is not stopped, the nation will embark on a 40-year slog through a healthcare wilderness that will result in very few of us, if any, making it out alive.

These people really are delusional.

And for the record, Obamacare or no, I really don't expect to be alive in forty years.

And since the Amalekite treatment didn't work, I'm guessing Ted's next step will be to go all Moses-and-the-Midianites on Obamacare! You know: slaughter all the males and any females past the age of puberty, then divvy up the pre-pubescent girls as slaves.

(Interesting in-line spell checker quirk: it recognizes "Amalekite" but not "Midianite". Wonder why that is? One's hardly in more common use than the other.)

For the rest of us who stand with him on the side of freedom, let's join together and continue to hold up Cruz's arms and extend to him the heartfelt appreciation of a grateful nation.

For voting the same way as the other 99 Senators, hallelujah!
~

I wonder what Jeannie does for fun? Does she ever hang around the house in old sweatpants and sneakers and spend a rainy afternoon digging classic black & white movies and eating peanut butter sandwiches?

I find glass toilet fetishism far more comprehensible... at least it has something to do with something real.

Just remember, these are the people who claim we see Obama as a messiah. It's always projection.