Happy Birthday, M. Bouffant! I Got You a Coot!

Not, alas, a cooter, which I understand is Southern slang for a turtle, or a vagina, or perhaps, if you're really in a mood to party, both, but a wizened old codger who may be familiar to readers of Wo'C and/or our local fishwrap.

The coot in question, Burt Prelutsky, is known (vaguely) to Angelenos of a certain age, since he used to be the "humor columnist" for the LA Times, before they hired Jonah Goldberg for that position and didn't tell him.

As Doghouse Riley reminded me when I first wrote about today's subject, back on the old Wo'C site, Burt cut his teeth as a script writer for Dragnet 1967, penning such classic and well remembered episodes as Burglary: Mister, Juvenile: DR-35, and Frauds: DR-28.  He had a fairly respectable career in TV, with credits that include one episode of The Rockford Files, nine episodes of M*A*S*H, and one episode of Dr. Quinn, Medicine Woman, culminating in six episodes of Diagnosis: Murder.  Then he got the gig at the Times, which I recall him being fairly terrible at, and when that petered out he puttered around in his bathrobe, wandered out into the street, and was finally discovered asleep on the sofa at WorldNetDaily, where he now produces a column called "The Squeaky Wheel," because "The Squeaky Fromme" was already taken.

Before we get into this, I should mention that Burt has been recycling the same column for the past five years -- a version of his Amish-like shunning by Hollywood liberals -- so while he's a grumpy old bigot, at least he's trying to save the planet.


There are people who will find excuses for pedophiles and for women who feel themselves entitled to having abortions five minutes before the baby is ready to pop, but will call for a lynch rope if anyone dares to pronounce the word that the N-word refers to.

I think there are a couple inherent problems with announcing two new classes of hominids, especially when your paper hasn't yet been peer reviewed.  For the latter group, I imagine the scientific community would demand fairly substantive proof that there are women who will go eight months, thirty days, twenty-three hours and fifty-five minutes into a pregnancy before abruptly changing their mind, and that they attract an entire, previously unknown species of cheerleading excuse mongers.  As regards the former claim, I admit that Burt is on firmer ground so far as evidence is concerned, but suspect, as a result, that he's on pretty thin ice with the Catholic church.


We have been told time and again that the world will stop spinning if white people utter the word that’s tossed around like a Frisbee in the black community.

I didn't realize the N-word has such aerodynamic properties.  I wonder if Black people ever take their saucer-shaped racial epithet and some empty cardboard boxes down to the park to play N-Word Golf.


Blacks never explain why the word that’s supposed to be the worst obscenity imaginable has such wide currency within their own ranks.

What could be more damning than the failure of young Negroes to justify their culture to an elderly crank who writes for a conspiracy-mongering right wing website?  It's almost like they neither care what he thinks, nor respect the sovereignty of his lawn!


Black stand-up comedian Chris Rock made his name doing a bit in which he compared blacks, whom he claimed to love, to niggers, whom he despised and ridiculed. It resonated with middle-class black audiences because it summed up their own attitudes. So why is it that whites aren’t allowed to make the same obvious distinctions without resorting to the babyish N-word?

Yeah, they can trust us with it!  It's not like we've ever misused that word in the past.


Why are we not supposed to be able to recognize the difference between men who go to school, hold down jobs, refrain from drug use, get married and help raise their children, from the bums who do none of those things?

And why doesn't using the B-word instead of the N-word give you the same tingle in your Depends?


In addition, how does calling a friend or neighbor a nigger work as a bonding agent?

I dunno, Burt. I usually just grab the Krazy Glue...


I’m 73 years old and I’ve never heard one Jew call another Jew a kike, a Hebe or a sheeny.

Really?  Apparently you've never seen Gentleman's Agreement either.  I'd maybe hasten on over to Netflix, Burt.  You're not getting any younger.


One of the anomalies of modern life is provided by Hollywood. Only in the town I call home would you find thousands of the very people dedicated to the eradication of the Second Amendment devoting most of their working hours to making movies and producing TV shows that glorify men protecting their families, city, nation and planet with guns.

Hm, I think I maybe see why the work dried up for Burt -- it really helps the whole assembly line process of Hollywood film production if the writer realizes this stuff is supposed to be fiction. I'm pretty sure, despite their making seven films on the subject, that Universal Studios wasn't actually trying to inspire the scientific community to drop that polio vaccine research and genetically engineer a species of talking mule.

And not just those regular guns they don’t want the rest of us to have, but humongous weapons with huge – even limitless – magazines.

On the other hand, I suspect those Hollywood liberals would be fine if Aaron Alexis, like Bruce Willis, had been armed with blanks.


Speaking of life in my town, a while ago I was invited to attend a luncheon with other former L.A. Times employees. These get-togethers are a monthly affair, but I had never attended one before.

Which probably accounts for your continuing to receive invitations.

But having nothing else to do one Friday, I decided to show up at the restaurant in Pasadena.

But even before the shunning, it all started to go to hell when Burt realized this restaurant didn't have an Early Bird Special, and wouldn't honor his coffee coupon.


As it turned out, I only knew one person, a now retired assistant editor, but everyone was pretty friendly. That is they were until we reached the point when, after the meal...I mentioned some of the scripts I had written for TV and then named a few of my books: “Conservatives Are from Mars, Liberals Are from San Francisco,” “Liberals: America’s Termites,” “Barack Obama, You’re Fired!” and “67 Conservatives You Should Meet Before You Die.”

I can't believe liberals are so touchy about being compared to home-wrecking insects.  Burt probably should have opened with the N-word as an icebreaker.

The booing was so loud and raucous, you might have thought I had claimed authorship of “Mein Kampf” and “The Protocols of Zion.”

Keep in mind this was supposed to be a social gathering, not a Hillary for President pep rally.

Maybe it wasn't your body of work they objected to so much as your penchant for walking between the tables, spritzing the guests with household pesticide and screaming "RAID?!"

So the next time some pinhead insists that the members of the mass media aren’t left-wing bigots, send him to me. I’ll straighten him out. With the business end of my Louisville Slugger, if necessary.

Yeah. Can't imagine where they got that Nazi comparison. 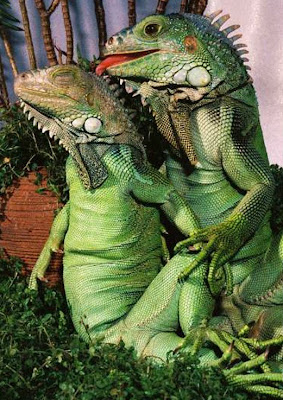 Here's wishing Monsieur Bouffant the happiest of natal anniversaries.
Posted by Scott at 1:02 AM

All the cool kids get lizard pron for their birthdays!

Dang Scott. You keep on posting lizards like that and I'm going to have to throw my D.O.B. into the mix.

A most joyous birthday to you, M. Bouffant!

Wow, that Prelutsky fellow is unpleasant. He's what you'd get if you gene spliced David Duke and Grandpa Simpson.

"Now I was wearing a white robe, which was the style at the time..."

Got me a coot? I is officially one!! Currently I'm typing a book of pomes for the wretched, Now We Are Six-ty.

Man those lizards are creepy. It's the loose wrinkly skin.

Speaking of wrinkles (I can web-log pimp today at least, can't I?) & since Doc Logan mentioned his pleasantness (or not) here is my two-part encounter w/ Burt. The sequel has video of BP squawking.

Thanks all, & best wishes on your journeys to decrepit oblivion.

Burt's shit wouldn't fly on most buses, why would he expect respect on the interwebs?

“Conservatives Are from Mars, Liberals Are from San Francisco,”

If conservatives were actually alien invaders from a dead world, it sure would explain quite a bit. I mean, it isn't sociopathic behavior if they're not screwing over their own species, right? And it's not their damn planet, either, is it, Monkey Boy?

But what's wrong with being from San Francisco? Oh, that's right: SF is wingnut code for limp-wristed faggotry. Truly, only the insidious machinations of the vast Liberal Conspiracy -- with a probable assist from that fiend in human form, Fu Manchu -- can explain why this original, towering intellect hasn't laid permanent claim to the top of the best-sellers list.

Jumping on a rapidly disappearing bandwagon, Happy Birthday, M.
Have a groovy celebration.
Those have to be the sexiest Sexy Birthday Lizards I have ever seen.
Suezboo

Also congrats to Scott, who has located the only Jew who has never heard of Heeb Magazine.

You keep on posting lizards like that and I'm going to have to throw my D.O.B. into the mix.

Happy belated birthday, your Boufness...here's hoping it was a day crammed with coot activities!

May you long continue to be bouffant, M., and may you never deflate, if ya know what I mean, wink! The lizards are smouldery for not-warm-blooded creatures, but it's the Coot I'd be thankful for if it were my birthday... for he is a stirring reminder of how very much one is not a fractious asshole one's own self.

Happy Birthday and many of 'em!

This post was much more enjoyable and hilarious, once I discovered that the old coot Burt Prelutsky is not the same as the non-coot, children's author Jack Prelutsky.

I do, however, want to go on record as being a human being who contributes every so often to this blog, that I really, REALLY don't like the sexy lizard pics. It pretty much kills the mood and drys things up for me.

Man, this guy is really upset that he can't use the N-word constantly without getting dirty looks from everyone else at the family dinner table.

Oh, hey, and he's also an Internet Tough Guy. Surprise, surprise! Because that always goes hand-in-hand with being an Internet Crybaby.

OK Scott, the anniversary of my decanting is August 1st, Lammas AND Jerry Garcia's birthday (I am not going to say what year except to mention Eisenhower was President).
So. I want a flying lizard for my birthday.*

I've got an idea. Let's all go over to M.B.'s place and crash his comments (old coots appreciate that).

And Mary, I have no idea why you would find cold blooded scaly critters licking each other creepy.

*Of course, when I'm dead and in hell I'm going to want ice water. Doesn't mean I'm gonna get it.

Hey, Bouffant --- didja get any of the e-cards or e-mail birfday wishes & love that I sent? I know that I've been MIA aroun dhere for way too fucking long, but I REMEMBERED YOUR BIRFDAY!